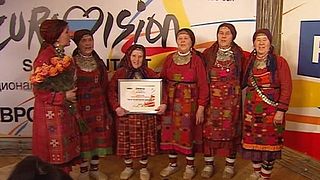 Folk group the "Buranovo Grannies" will compete in the Eurovision Song Contest, after winning a televised contest in Moscow to represent Russia.

The six grandmothers beat 24 other acts - including a duet between 2008 winner Dima Bilan and Tatu's Yulia Volkova - with song Party For Everybody.

Buranovskiye Babushki, from the Udmurt Republic, say they will use any cash raised to build a church in Buranovo.

"Grandmothers do not need glory and wealth," a member told Vesti news.

The singer, named only as "Grandmother Olga", said building the village church was their "only goal".

Their winning song, which begins as a traditional folk tune before a modern dance beat kicks in, features the refrain, "party for everybody, come on and dance".

The lyrics to the song, which feature a mixture of English and Udmurt - a language related to Finnish - were written by the grandmothers.

Buranovskiye Babushki became known in Russia with covers - sung in Udmurt - of classics including the Beatles' Yesterday and the Eagles' Hotel California.

In 2010, they came third in the Russian Eurovision qualifying contest with their song Dlinnaya-dlinnaya beresta i kak sdelat' iz neyo aishon, which translates as "long, long birch bark and how to make a hat of it".

The UK will also be represented by a pensioner at the 57th Eurovision Song Contest in Baku, Azerbaijan when 75-year-old singer Engelbert Humperdinck will perform the British entry.

The Russian singers will take part in the first qualifying heat on 22 May. The Eurovision Song Contest takes place on 26 May.

Meanwhile, Eurovision organisers have announced that Armenia had pulled out amid tension with old rival Azerbaijan.

Azerbaijani and Armenian forces fought a war over the disputed region of Nagorno-Karabakh in the 1990s which left at least 25,000 people dead.

A ceasefire was signed in 1994 but no permanent peace deal has been reached.