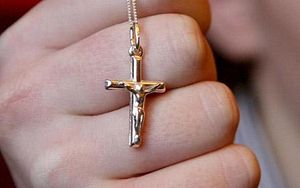 In a highly significant move, ministers will fight a case at the European Court of Human Rights in which two British women will seek to establish their right to display the cross.

It is the first time that the Government has been forced to state whether it backs the right of Christians to wear the symbol at work.

A document seen by The Sunday Telegraph discloses that ministers will argue that because it is not a “requirement” of the Christian faith, employers can ban the wearing of the cross and sack workers who insist on doing so.

The Government’s position received an angry response last night from prominent figures including Lord Carey, the former Archbishop of Canterbury.

He accused ministers and the courts of “dictating” to Christians and said it was another example of Christianity becoming sidelined in official life.

The Government’s refusal to say that Christians have a right to display the symbol of their faith at work emerged after its plans to legalise same-sex marriages were attacked by the leaders of the Roman Catholic Church in Britain.

A poll commissioned by The Sunday Telegraph shows that the country is split on the issue.

Overall, 45 per cent of voters support moves to allow gay marriage, with 36 per cent against, while 19 per cent say they do not know.

However, the Prime Minister is out of step with his own party.

Exactly half of Conservative voters oppose same-sex marriage in principle and only 35 per cent back it.

There is no public appetite to change the law urgently, with more than three quarters of people polled saying it was wrong to fast-track the plan before 2015 and only 14 per cent saying it was right.

The Strasbourg case hinges on whether human rights laws protect the right to wear a cross or crucifix at work under Article 9 of the European Convention on Human Rights.

The Christian women bringing the case, Nadia Eweida and Shirley Chaplin, claim that they were discriminated against when their employers barred them from wearing the symbols.

They want the European Court to rule that this breached their human right to manifest their religion.

The Government’s official response states that wearing the cross is not a “requirement of the faith” and therefore does not fall under the remit of Article 9.

Lawyers for the two women claim that the Government is setting the bar too high and that “manifesting” religion includes doing things that are not a “requirement of the faith”, and that they are therefore protected by human rights.

They say that Christians are given less protection than members of other religions who have been granted special status for garments or symbols such as the Sikh turban and kara bracelet, or the Muslim hijab.

Last year it emerged that Mrs Eweida, a British Airways worker, and Mrs Chaplin, a nurse, had taken their fight to the European Court in Strasbourg after both faced disciplinary action for wearing a cross at work.

Mrs Eweida’s case dates from 2006 when she was suspended for refusing to take off the cross which her employers claimed breached BA’s uniform code.

The 61 year-old, from Twickenham, is a Coptic Christian who argued that BA allowed members of other faiths to wear religious garments and symbols.

BA later changed its uniform policy but Mrs Eweida lost her challenge against an earlier employment tribunal decision at the Court of Appeal and in May 2010 was refused permission to go to the Supreme Court.

Mrs Chaplin, 56, from Exeter, was barred from working on wards by Royal Devon and Exeter NHS Trust after she refused to hide the cross she wore on a necklace chain, ending 31 years of nursing.

The Government claims the two women’s application to the Strasbourg court is “manifestly ill-founded”.

The response, prepared by the Foreign Office, adds: “In neither case is there any suggestion that the wearing of a visible cross or crucifix was a generally recognised form of practising the Christian faith, still less one that is regarded (including by the applicants themselves) as a requirement of the faith.”

The Government has also set out its intention to oppose cases brought by two other Christians, including a former registrar who objected to conducting civil partnership ceremonies for homosexual couples.

Lillian Ladele, who worked as a registrar for Islington council in north London for 17 years, said she was forced to resign in 2007 after being disciplined, and claimed she had been harassed over her beliefs.

Gary McFarlane, a relationship counsellor, was sacked by Relate for refusing to give sex therapy to homosexual couples.

Lord Carey said: “The reasoning is based on a wholly inappropriate judgment of matters of theology and worship about which they can claim no expertise.

“The irony is that when governments and courts dictate to Christians that the cross is a matter of insignificance, it becomes an even more important symbol and expression of our faith.”

The Strasbourg cases brought by Mrs Chaplin and Mr McFarlane are supported by the Christian Legal Centre which has instructed Paul Diamond, a leading human rights barrister.

Judges in Strasbourg will next decide whether all four cases will progress to full hearings.

If they proceed, the cases will test how religious rights are balanced against equality laws designed to prohibit discrimination.

Andrea Williams, the director of the Christian Legal Centre, said: “It is extraordinary that a Conservative government should argue that the wearing of a cross is not a generally recognised practice of the Christian faith.

“In recent months the courts have refused to recognise the wearing of a cross, belief in marriage between a man and a woman and Sundays as a day of worship as ‘core’ expressions of the Christian faith.

"What next? Will our courts overrule the Ten Commandments?”

Growing anger among Christians will be highlighted today by Delia Smith, the television chef and practising Roman Catholic, who will issue a Lent appeal on behalf the Church’s charity, Cafod, accusing “militant neo-atheists and devout secularists” of “busting a gut to drive us off the radar and try to convince us that we hardly exist”.

ICM Research interviewed an online sample of 2,001 adults between March 7 and March 9. Interviews were conducted across the country and results have been weighted to the profile of all adults.