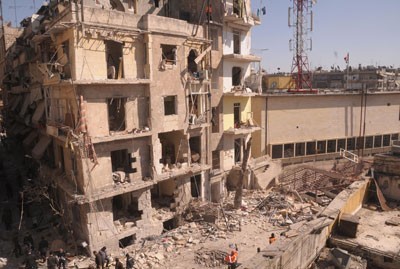 A CAR bomber yesterday targeted a security headquarters in a Christian district of the northern Syrian city of Aleppo, killing three and wounding 30.

The explosion, the second in the city since unrest began, occurred at a time when the area is usually thronged with people on the first working day of the week.

On Saturday, simultaneous suicide bombings in Damascus near an air force intelligence facility and the criminal investigation department killed 27 and wounded more than 100. The latter was in the al-Qasaa area, also inhabited by Christians. A third vehicle exploded near an army bus, killing its occupants.

Al-Baath, the ruling party’s daily, blamed “terrorists supported by foreign powers”. The aim of the attacks was to disrupt the mission of UN-Arab League envoy Kofi Annan “and to foil international efforts to find a political solution to the crisis”, it asserted.

A previously unknown Muslim fundamentalist group calling itself al-Nusra Front to Protect the Levant claimed it had carried out the Damascus attacks “to avenge the people of Homs”, from which rebels were recently expelled during an army offensive.

These and earlier bombings in Damascus and Aleppo, the country’s two largest cities and government strongholds, have been blamed by the government and the US on al-Qaeda. Sources in Aleppo have reported rebel activity north of the city and Christians have said churches have been attacked, creating the fear the community could be targeted, in the same way Christians in Iraq have been since the 2003 US occupation.

The weekend bombings occurred as claims Saudi Arabia is supplying weapons to Syrian rebels via Jordan were leaked.Amman denied the claims.

Jakob Kellenberger, head of the International Committee of the Red Cross (ICRC), warned the situation in Syrian was deteriorating. “The ICRC is particularly concerned about vulnerable people, such as those detained in connection with the fighting and those who are sick or injured and need medical care.” He is due in Moscow today to discuss Syria with Russian foreign minister Sergey Lavrov.

Mr Kellenberger expressed concern over civilians in Homs, Hama, Idlib and Deraa and said a daily two-hour ceasefire was essential to permit evacuation of wounded and provide residents with aid. He called for “an unambiguous commitment by all parties concerned . . . to end the fighting”.

On Saturday, Mr Lavrov reiterated Moscow’s demand that government forces and rebels should cease fire simultaneously, and called on all parties to engage in dialogue with the aim of reaching a settlement. He expressed support for Mr Annan’s mission. Mr Annan’s technical team is due in Damascus this week to begin talks with the government on implementation of his peace plan.