Cooperation of Serbia, Russia will be "progressive" 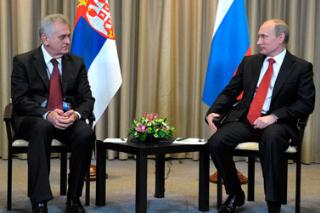 Putin said that the new Serbian president could count on Moscow's support in the implementation of his policy.
The two officials met on the margins of the 13th United Russia Congress in Moscow on Saturday for about 15 minutes before the press, and then continued the conversation behind closed doors.

Nikolic thanked Putin for Russia’s support to Serbia on the international scene, especially when it comes to preservation of Kosovo within Serbia.

Serbia is on the road toward the EU. It’s a long and uncertain journey. We will organize the country in accordance with the EU rules, the newly elected Serbian president said and added that he so far had not heard that Serbia had to recognize
Kosovo’s unilaterally declared independence.

We cannot do it, even if it means we have to stop the negotiations that very moment, Nikolic stressed.
He also pointed out that Serbia was committed to military neutrality according the resolution passed by the Serbian parliament.

Serbia will not join NATO, he said, adding that he spoke openly about that to the citizens of Serbia in the election campaign, and won.

Putin congratulated Nikolic on his victory in the presidential election and wished him to accomplish everything that he promised to the Serbian people.

You can count on the help of Russia, Putin said. The position of Russia is known, said Putin. The Russian President then asked Nikolic to meet his, he said, an unusual request.

I know that Boris Tadic was your opponent in the campaign. But since I worked with him in previous years, I am asking you, and it is unusual, to convey to him my greetings and my best wishes for his future work, Putin said.
Putin and Nikolic then continued the conversation behind closed doors.

Russia will provide a loan to the amount of 800 million U.S. dollars to Serbia, President Vladimir Putin said after a meeting with Serbian President-elect Tomislav Nicolic on Saturday.

The loan will be provided for the development of the infrastructure.

Russia is ready to implement projects in this field, the Russian president said.

Putin noted that Russia waited for a concrete feasibility study from partners. He urged Nicolic to give a corresponding impetus to newly created executive structures.