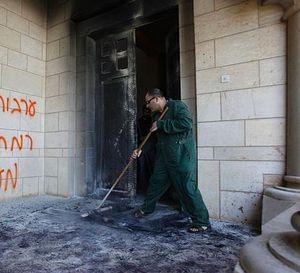 Vandals burnt the door of a Catholic monastery in central Israel early on Tuesday and scrawled anti-Christian graffiti in an apparent "price tag" hate crime, Israeli police and witnesses said.

"A wooden door of the convent was burnt by unidentified vandals and the slogan 'Jesus is a monkey' was sprayed on the walls" of the Trappist monastery in Latrun, police spokesman Micky Rosenfeld told AFP.

The Trappist abbey of Latrun, located between Jerusalem and Tel Aviv, is one of the most famous monastic sites of the Holy Land.

In addition to the anti-Christian graffiti, the words "mutual guarantee" as well as "Ramat Migron" and "Maoz Esther" were spray-painted in orange on the walls of the monastery.

Israel considers settlement outposts built without government approval to be illegal and often sends security personnel to demolish them. They usually consist of little more than a few trailers.

On Sunday, Israel evacuated the 50 families of what was the largest West Bank outpost of Migron in line with a court order. Police said they were bracing for retaliatory action.

Residents of Migron condemned the attack against Latrun monastery.

A spokesman for the community said in a statement that "any attack against a religious institution, in Migron or anywhere in the world, is prohibited and morally corrupt."

"Price tag" is a euphemism for revenge hate crimes by Israeli extremists, which normally target Palestinians and Arabs and tend to involve the torching and vandalism of cars, mosques and olive trees.

But attacks have widened in scope and have also targeted the Israeli army, Israeli anti-settlement activists and several churches.

Israeli Prime Minister Benjamin Netanyahu said that "those responsible for this reprehensible act need to be punished severely."

"Freedom of religion and freedom of worship are among the most basic foundations of the State of Israel," a statement from his office said.

French foreign ministry "strongly condemned" the "act of vandalism against a place of worship and peace," and called on Israel to bring its perpetrators to justice.

The Assembly of Catholic Ordinaries of the Holy Land condemned the latest attack and urged Israeli authorities to "act to put an end to this senseless violence and to ensure a 'teaching of respect' in schools for all those who call this land home."

"Sadly, what happened in Latrun is only another in a long series of attacks against Christians and their places of worship," it said. "What is going on in Israeli society today that permits Christians to be scapegoated and targeted by these acts of violence?"

The Palestinian Authority also called on Israel to bring the perpetrators to justice.

"Several mosques have been attacked in recent months, but little or nothing has been done," it said. "The extremist policies of the Israeli government, marked by intolerance, encourage settler hate crimes against Palestinians and their places of worship."

On February 20, unidentified assailants daubed death threats on the walls of the Baptist House church in central Jerusalem and vandalised three cars.

Two weeks earlier, graffiti reading "death to Christians" and "price tag" were sprayed on the walls of the compound of the Greek Orthodox Monastery of the Cross in mainly Jewish west Jerusalem.