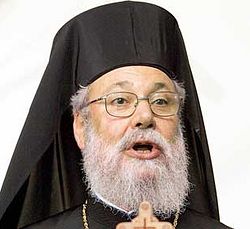 Leaders of the Cyprus Orthodox Church on Tuesday decided to take a 25 percent pay cut, while lay staff will see their income slashed by 15 percent in an austerity drive by the clergy. The influential Orthodox Church has decided to tighten its collective belt as its revenues have been affected by the island’s economic slump and exposure to Greek debt.

Church leaders decided to set an example by slashing their own salaries by a larger margin. Archbishop Chrysostomos II (photo) and his fellow bishops also agreed to forgo their 13th monthly salaries, while yet-to-be-announced pay cuts for priests will come into effect from January 2013.

Salary cuts for lay staff apply to those earning more than 1,500 euros a month, Paphos Bishop Georgios said following Tuesday’s meeting of the Holy Synod. “There was a discussion and we came to these percentages. Opinions were expressed but the decision was unanimous,” Bishop Georgios told reporters. He said there were proposals for steeper and lesser cuts before the final figures were agreed. The Holy Synod also decided to freeze recruitment to monasteries and the various bishoprics. Although the church is the biggest landowner after the government and has business interests from drinks to banking, its income has suffered as Cyprus tackles the euro crisis. [AFP]