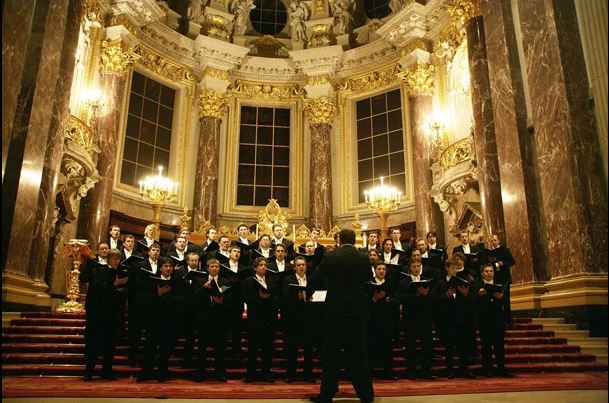 The Moscow Sretensky Monastery Choir.
The Sretensky Monastery was founded more than 600 years ago in honor of Moscow’s miraculous deliverance from invasion by Tamerlane. The Bolsheviks closed it in 1925, and the secret police used its grounds as an execution yard during the years of Stalinist terror.

Little wonder that its choir sings with such power and expression, standing shoulder to shoulder in a narrow loft with golden-winged angels looking down from the ceiling above.

About 30 members of the all-male Sretensky Monastery Choir are embarking on a tour of the United States this week, starting with a performance Saturday at the Library of Congress for invited guests and a public appearance at the Kennedy Center Terrace Theater on Monday.

While the choir’s repertoire is rich with church music, said director Nikon Zhila, the American audience also will hear a selection of Russian folk songs, robust pieces from the beginning of the 20th century and even some from the Soviet period.

“We love music with deep spiritual meaning,” said Zhila, just before a morning service celebrating the discovery, in the year 326, of the cross on which Christ was crucified. “The best music raises your thinking to new levels and appeals to your best inner feelings.”

Russian Orthodox church music, said Father Tikhon, the monastery’s abbot, came from ancient chanting and singing and has one goal. “It helps your soul break through from our world to God,” he said. “It’s a very important instrument and can’t compare to anything in the outside world. From an aesthetic point of view it’s simply beautiful.”

On its American tour, nine cities in 20 days, the choir will also sing the great African-American spiritual “Go Down Moses,” with its resonant “let my people go” refrain. “We really like it,” the abbot said. “It’s wonderful the way our guys sing it.”

That put Father Tikhon, sitting in his library drinking green tea beneath a portrait of the martyred Czar Nicholas II, in a reflective mood.

“Fyodor Dostoyevsky said beauty would save the world,” Father Tikhon recalled, adding that tours such as this are a way to bring Russians and Americans together in a nonpolitical way. That thought was echoed by Father Paul, who had spent time in the United States and offered some translation help during the conversation.

“Politics!” exclaimed Father Paul. “It’s like a nail in my liver.”

There is plenty of politics in Russia, with the church sometimes criticized for being too close to the state, too much part of the power structure and in a too-favored position.

Still, Father Tikhon couldn’t resist playfully alluding to all the gossip about him. He is rumored to be President Vladimir Putin’s spiritual adviser. Father Tikhon said he had no intention of revealing whether he was or wasn’t — it would deprive too many people of enjoyable speculation, he said.

Last year Father Tikhon, the executive secretary of the Russian Orthodox Church Patriarchal Council for Culture, wrote a best-selling book in Russian that now has been translated into English.

The book, “Everyday Saints,” offers a lively look at monastic life, beginning with Father Tikhon’s baptism at age 24 in 1982. Early on he had to go from a night in the cattle shed — cleaning up the manure of 30 cows, a bull and a dozen calves — to helping a very strict and demanding abbot put on his vestments.

He recalls the shock of hearing his revered spiritual father — who had spent years in the gulag — casually repeating a well-known prison slogan: “Don’t believe. Don’t fear. Don’t beg.”

But even in the first tumultuous decade after the officially atheist Soviet Union fell apart, he recalled, prayer exerted its power. In 2001, the monks were trying to help destitute farmers near their hermitage in the countryside. They saved $180,000 toward buying $200,000 combines. The money was in dollars because of fear of ruble devaluation and was kept under the floorboards instead of in unsafe banks. It was stolen. Prayer, and a Keystone Kops chain of events, brought the money back.

The monastery has been back in church hands since 1991, the year the Soviet Union dissolved. Its buildings have been slowly restored, and though it sits on traffic-clogged Bolshaya Lubyanka Street, all is quiet behind its thick walls. Monks walk purposefully, geraniums bloom brightly, birch trees arch gracefully.

A Russian Orthodox Church service is a deeply sensory experience, with bells tolling, incense burning in clanging censers, priests chanting, icons dazzling with gold, the choir voices filling the air — and worshippers standing in reverence, sometimes for hours. Only the ill and frail may sit.

This is the experience the choir intends to share through its music — with American audiences that will have the luxury of a seat.

...
Предыдущий Следующий
Комментарии
Войдите через FaceBook ВКонтакте Яндекс Mail.Ru Google или введите свои данные:
Debbie Stuart 6 октября 2012, 07:00
A warm welcome to the US, Sretensky Monastery Choir and Archimandrite Tikhon! Two years ago, I was baptized into the Orthodox Faith. And I am very grateful! I want to thank you for this wonderful web site. I often listen to the audio of the services, and the articles are enlightening. Слава Богу за все! Деввора США
Cornelius(Yakov) Krissilas 6 октября 2012, 07:00
I saw the Stretensky Choir when they visited Toronto a few years ago when they visited the Russian Church of Holy Trinity on Henry St.I took some pics of them also.And met and talked to some members of the Choir.They are magnificent and wonderful to see and hear them!!