Sretensky Monastery Choir at the Library of Congress 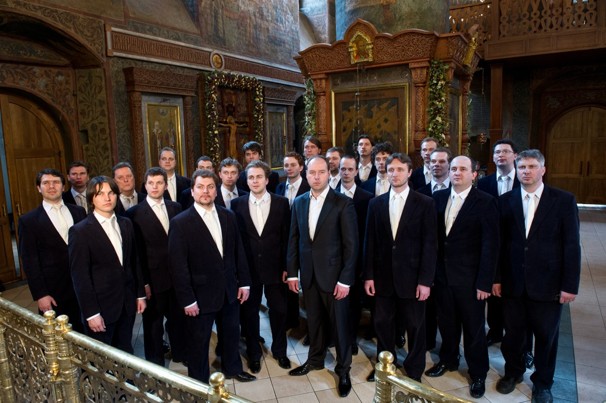 Every few years, the record industry lights upon another singing nun or singing friar or group of singing monks to reign atop the recording charts. So before you hear Moscow’s formidable Sretensky Monastery Choir, you should understand that this group is not really part of this genre. There are no monks in robes here. The cadre of young men that took the stage at the Library of Congress on Saturday night for the first of two Washington appearances — they will perform at the Kennedy Center Monday night — looked less like a religious group than like some elite Special Forces troop. Shiny, tailored gray suits, navy ties, short haircuts, serious inscrutable faces, and a median age in the early 30s: it’s one elite face of Mother Russia, all right, but hardly a folksy one.

The choir does indeed represent an artistic elite: These are special forces, all right. I hope that lots of choral directors in Washington, a town known for its choral prowess, will be able to hear this group with the hair-trigger, turn-on-a-dime control and near-perfect diction— 30 rolled R’s sounding as one. This chorus was founded in the wake of the dissolution of the Soviet Union with the goal of restoring Orthodox music, and they approach the task with athletic precision. They prepared for their entrances with such keenness that there was a trace halo of sound before the note began, while director Nikon Zhila gave the downbeat well before the actual moment of engagement.

When the sound began, it was a buoyant deep-piled carpet of rich color, lying atop the fundament of burring black basses, and springily resilient with the group’s ability to shift dynamics with minute exactness, from soft to loud to soft to half-loud to a blaring fortissimo, and all the way back. Indeed, these changes were so pronounced and intense that motion sickness threatened from all the ups and downs, backs and forths. Individual soloists emerged from the block of singers seamlessly, so that it was sometimes difficult to figure out who was singing: where was that rich bass, that tight burly tenor, whose solo voice suddenly stepped out from the crowd before blending right back in again?

The exception was Dmitry Belosselskiy, who came out of the wings with the aura of a kicker in American football, brought in for a special moment, with the tacit trappings of star power, and opened his mouth to reveal a gleaming dark bass-baritone shot through with streaks of gold. Belosselskiy has been a member of the chorus since 2005; he’s also pursuing a solo career, and he clearly has some star power. His first appearance came right before intermission for what might be termed a resounding first-act finale; but of his several numbers through the evening the most effective, to my ear, was the heartfelt “The Only Begotten Son” by Mikhail Rechkunov, when the technical and the emotional melded in a powerful outburst.

The music was not likely to be familiar to the non-Russians in the audience. It represented a cross-section of Orthodox music, and showed the way that music was at once reverently religious and gradually, over time, wove more and more secular threads into its tapestry: rollicking folk rhythms in “May My Prayer Be Set Before You Like Incense” by Pavel Chesnokov, tender melody in “Voice of an Angel” by Dmitry Bortniansky. It’s tricky to saddle religious music performed in concert with qualitative judgments, particularly when it has the symbolic significance of this music, which ranged from arrangements of ancient melodies through a “Trisagion” by Tchaikovsky to more contemporary fare, and which the choir sang as if it deeply mattered. There were a lot of Russians in the audience, and they showed their familiarity with both performers and repertory, applauding as soon as pieces were over but not even moving when Zhila held out a long pause after a huge fortissimo in “Blessed is He Whom Thou Hast Chosen,” so that the room echoed with the sound.

Religious music performed at a secular concert does smack a bit of a product packed for export; it becomes an expression of folklore, a tradition not shared by all who hear it. The choir underlined this, perhaps unwittingly, with its second theatrical introduction of a new soloist at the end of the evening: a tenor soloist, not listed in the program but looking for all the world like one of the Three Tenors, came out for a heartfelt “May God Be Gracious to Us” with arcing tenor melodies that wouldn’t have been out of place on a Bocelli program. The chorus then veered over to the secular world — which will be featured at the Kennedy Center program — with a folk song with Belosselskiy, and, in a supreme moment of incongruity, with tenor-hood trumping tradition, a performance of that tenor chestnut “Granada.”