Hundreds of thousands rally against gay ‘marriage’ in France 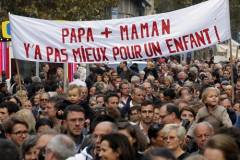 On Saturday, a nationwide rally drew an estimated 200,000 protesters in Paris according to organizers, with tens of thousands more attending rallies throughout the country.

Almost 30,000 traditional marriage supporters demonstrated in the city of Lyon, according to a Reuters report. Police there reported that 40 counter-protesters were arrested after they attempted to disrupt the rally.

Police in Toulouse reported that tear gas was used to break up a group of homosexual activists who tried to interfere with the gathering of five thousand traditional marriage supporters.

Le Parisien reports that between 6,000 and 8,000 people demonstrated in Marseille, proving that, as one blogger quipped, “there are more than just drug dealers in the beleaguered city.”

Marseille police said they used tear gas against counter-demonstrators who unfurled a banner that read, “Your model of society is dead, welcome to Sodom and Gomorrha,” and hurled insults at the traditional marriage demonstrators.

Saturday’s demonstrations were endorsed by leaders of the of the Catholic, Muslim, Protestant and Jewish communities, who demanded the government of President François Hollande reconsider the impact of changing “a foundation of society.”

Hollande made same-sex ‘marriage’ one of his presidential campaign promises, saying his government plans to legalize it by mid-2013. He also promised adoption rights for homosexual couples, and said that lesbian couples would have access to artificial insemination and in vitro fertilization.

The French Catholic Bishops have led the fight against the proposed legislation, with the cardinal archbishop of Paris saying same-sex “marriage” would harm the equilibrium of French society and of children. “It will not be ‘marriage for all’,” said Cardinal Andre Vingt-Trois, citing the government’s slogan, “it will be the marriage of a few imposed on all.”

“When we defend the right of children to build their personality with reference to the man and the woman who gave them life, we are not defending a particular position,” the cardinal archbishop said, “We are recognising what is expressed by the practices and the wisdom of all the peoples since the beginning of time and which modern specialists confirm.”

A second demonstration, organized by the conservative Catholic organization Civitas, took place in Paris on Sunday.

Gloria TV reports that some 9,000 traditional marriage supporters, including many clergy, marched with banners saying “France needs children, not homosexuals,” and “Marriage = one man + one woman.”

Civitas official Alain Escada told those gathered that same-sex marriage was “a Pandora’s box” that would let others demand extended marriage rights, including polygamists and incestuous people.

“Our objective is to wage a real battle to protect the family and child,” said Escada, whose group claims 1,200 members and a network of some 100,000 supporters.

AFP reports that the rally was marred by the appearance of members of Ukraine’s topless Femen counter-protesters wearing nuns’ veils and chanting, “in gay we trust.”

An AFP reporter said when the bare-chested feminists moved toward the marchers, “some of (the protesters) ran after them.” The Femen women were taken into custody by police, ostensibly for their own protection, the reporter said.

The weekend’s marchers were encouraged by the words of Pope Benedict XVI, who called on French bishops visiting him in the Vatican to oppose the proposed legislation, saying, “the Church’s voice must make itself heard relentlessly and with determination.”