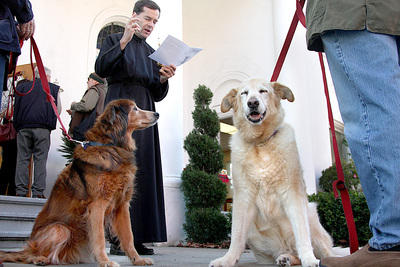 Several four-legged creatures were sprinkled with holy water, prayed over and blessed Saturday, as the Prophet Elias Greek Orthodox Church downtown celebrated its second Blessing of the Animals.

And their owners were touched.

Anne Hackett of Santa Cruz brought her blind and deaf dog, Helen, a white and black Catahoula Cur. Helen didn't seem encumbered by her disabilities, as she wagged her tail at visitors and played around with a huge Rhodesian Ridgeback named Maverick and a pit bull named Cupcake.

"It was very nice," Hackett said. "There were all sizes and kinds of dogs and I like that the priest came out and talked to every animal and person, one-on-one."

The Rev. Dennis Vierling said the Greek Orthodox Church has held animal blessings for many years, around the Dec. 16 Feast Day of St. Modestos of Jerusalem, the church's patron saint of domestic animals.

And he said they plan to have them every year. He said he was surprised what a pet-friendly town Santa Cruz is when he moved from North Carolina last year.

"I think it's a beautiful custom," Vierling said. "We're all called to be stewards of God's creations, and pets are important; they provide companionship and joy and fulfill a ministry in their own right."

During the ceremony, Vierling prayed that God, "who fashioned in wisdom both the

invisible and the visible creation ... who, in your loving providence, provide for all your creatures, from the first to the last; hear my prayer and drive away and banish every injury and illness from all these animals."

"There is just something so sweet about it," she said.

Jackie Russell, who was holding her nut-brown Chiweenie (a cross between a Dachshund and a Chihuahua), Snuggles, after the ceremony, said she too liked the way Vierling met all the pets and people before the short service.

He offered the dogs treats and bestowed a blessing on dogs and owners for a long life together, Russell said.

"It was wonderful," she said. "And everyone was very well-behaved."

She said she believes the blessing will provide some protection for Snuggles, who did look at peace in her owner's arms, warm in a little Christmas sweater.