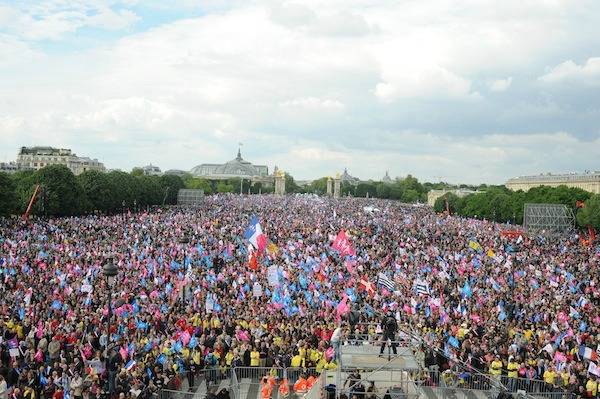 The French have done it again. Two weeks after same-sex “marriage” became legal, the odds seemed against a major turnout for the latest national demonstration against the new law. And the minister of the Interior, Manuel Valls, certainly did his best to discourage would-be participants from joining the march: all day Saturday, he sent out alarming messages on television and on the radio warning that in view of expected violence families with children would do best to stay at home.

But on Sunday, organizers estimated that up to a million people marched from three different points in Paris towards the Invalides, including large numbers of young people and families with children and babies in push-cars. One mother answering the press said she had originally intended to come without her kids – Valls’ intimidation tactics encouraged her to bring them along.

The estimate given by organizers is more than six times the number given out by the ministry of the Interior. However, having walked in the dense crowds from the Austerlitz station to Invalides and seen photos and films of the other two walks, a million seems more plausible than the “150,000” noted by the police – and Valls has proved over recent months that minimizing participation statistics by any means is a specialty of his administration. Not to mention hampering and hindrances of all kinds: the number of regional trains coming in from the western suburbs where many more conservative families live was unexplainably halved on Sunday without notice, and specially hired coaches coming in from the north of Paris were stopped for customs controls.

The spirit of the marches was grave and determined, but as always largely peaceful. Less than two weeks previous, riots broke out in Paris when fans of the Paris Saint-Germain soccer club were to celebrate the clubs victory in the national football league: hundreds of ethnic youths from the suburbs came to join (and ruin) the party, burning cars, smashing shop windows and placing the more luxurious parts of Paris in a state of siege. The riots only gave rise to 21 arrests and the government was heavily criticized for not having handled the crisis adequately – the police was even called away when the “disturbances” began. Manuel Valls capitalized on those incidents by announcing that on May 26th, when the “well-behaved French” who pay their taxes and leave demonstration venues impeccably unscathed came for their rally, he would deploy 4,500 law enforcement officers to prevent the “violence” he was expecting - not to say hoping for.

Frigide Barjot, the “Manif pour tous’” figurehead, added oil on the fire by announcing that she would not join the march as planned because of threats to her person and foreseeable “extreme right-wing” violence.

She was to say later, commenting on the demonstration for private TV station BFM-TV, that she had been more or less put aside by the Manif’s organization because of her favorable stance on “civil unions,” which she has been touting from the start as the only possible alternative to same-sex “marriage”. Increasing popular irritation against what has been seen as a hijack of demonstrators’ motives already lead to Barjot’s being booed and whistled at in Lyons three weeks ago at a regional “Manif pour tous” (“demonstration for all”). Barjot has also announced that “marriage” having been given as a “right” to “human people” there can be no question of asking for the law to be repealed: her objective is now only to modify filiation laws so that homosexuals cannot adopt. The fight over the gay ‘marriage’ law is over, she said, instead pleading for political pressure on mayors in view of future municipal elections in order to preserve biological filiation in as many cases as possible.

It seems these intricacies left Sunday’s demonstrators cold; their main slogan was and still is: “Hollande, we want nothing of your law.”

As for the violence promised by Manuel Valls, it was mostly police brutality, once again. On the eve of the demonstration, a group of young people held a surprise sit-in on the Champs-Elysées, chaining themselves to crowd barriers. The demonstrators, not older than 20 or 25, were manhandled by the police, arrested and taken into custody. One young man, who has by now been taken into custody eleven times over various – always non-violent – actions against the marriage law, only received notification of his custody after being held over three hours; and he was only provided with a lawyer 15 hours after his arrest instead of one as the law requires. On his release on Sunday evening, he immediately joined the demonstration at the Invalides.

Many of the arrests on Saturday were simply for wearing sweatshirts with the “Manif pour tous’” official logo.

On Sunday, after the end of the “Manif pour tous”, dozens of “Veilleurs” (“watchers” or “wakers”) gathered behind the Invalides with small candles to read poetry and sing their theme song titled “Hope”, L’Espérance, which also marked the end of the official demonstration amid hushed silence on the part of the thousands who were still present. They were to be dispersed by the police at 5 o’clock on Monday morning, only to be replaced by a new group who in their turn were disbanded by the armed forces. They are planning to meet again on Monday evening.

On the other side of the Invalides - the immense esplanade that had been completely filled by the “Manif pour tous” - many demonstrators decided to stay on. Apart from a few radical groups, 95 % of those present were absolutely non-violent. They were gradually cornered by riot police and gassed – as usual. Many were arrested and beaten, including a 14 year-old boy. One witness – author and historian Reynal Secher, specialist of the history of the French Revolution and the genocide of the Vendée – told LifeSite he was harshly instructed to leave the sidewalk where he was peacefully walking. He refused, politely, saying he had every right to be there. A riot police pushed him and made him fall in the street using his shield.

The same Reynald Secher said he personally witnessed five plain-clothes police agents trying to incite the young people around them to use violent behavior. Their appearance being easily identifiable, the crowd immediately accused them of being provocateurs on the part of Manuel Valls and told them to put on their official police arm-bands or to leave. They chose to leave – fast. Several pictures and videos of previous demonstrations show this type of agent heating up the crowd and then running off behind the riot police wearing a police band on their upper arm.

In total 350 demonstrators were arrested and 250 taken into custody. The overwhelming majority are sober, law-abiding young people who came up to Paris with friends, sometimes with their parish or their parents. 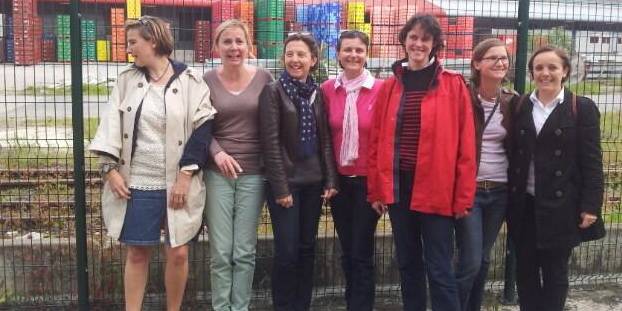 7 mothers in the courtyard of a police station after they were arrested for approaching a public high school in Paris where Hollande came to speak Monday afternoon.

Since the beginning of the anti-same-sex “marriage” demonstrations, the number of these arrests has been growing and several victims have opened lawsuits against the police for “wrongful arrest.”

To all appearances, the fight against legalized same-sex “marriage” is not going to stop with Sunday’s major demonstration. At the rally, Christian trade’s union CFTC vice-president Joseph Thouvenel called on the French to “enter into resistance” against the unjust laws on life, marriage, children and the family which are being implemented or prepared by the socialist government. Among these are euthanasia laws, attacks against child benefits and maternity leave, compulsory teaching of gender ideology in kindergarten, and free abortion for all – legal abortion is 100 % paid for by State insurance since Easter.

He asked the crowd to be inspired by the example of Solidarity – Solidarnosc – who shook off communist tyranny in Poland.

The “Manif pour tous’” new president, Ludovine de la Rochère, also spoke clearly and well. “You have found the energy you needed yesterday and today to stand up and fight. And you will continue to stand up tomorrow! … We do not want lies to form the very substance of the lives of the children of this country, we do not want gender ideology to triumph,” she said. “We are not running after a pseudo ‘sense of history’, we are writing History! Yes, we are building the future and that is why we are demonstrating. We want a better world, not a brave new world… Our demonstrations have been totally respectful of the laws of the republic; they have reacted as the apparatchiks of a totalitarian State – and I am not speaking lightly.”

France is standing up – and the government of François Hollande is more and more uneasy, over-reactive and openly biased.

The first “same-sex marriage” is to take place on Wednesday in the southern town of Montpellier. Several hundred guests, some 130 reporters and many political figureheads are expected to attend. The “happy couple” has been requested not to show itself in public as they were planning, dozens of riot police will protect the town hall where the “marriage” is to be registered and François Hollande in person has warned that he will tolerate no opposition.

In fact, tension is growing and even a mainstream daily splashed these words on its title page with a picture of Sunday’s rally: “France torn in two.”