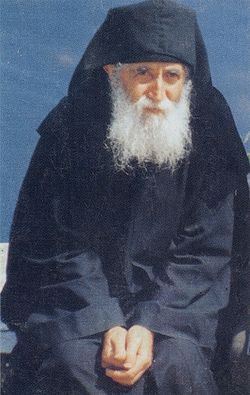 An annual memorial service in commemoration of the famous Athonite elder Paisios of Mount Athos (born Arsenios Eznepidis) was celebrated on July 12 in the St. John Theologian Monastery in Souroti, Greece, near Thessaloniki, where his holy relics rest. The service was headed by Metropolitans Nikodemos of Kassandra and Athanasios of Limassol. Thousands of Elder Paisios' spiritual children and those who love him came to Souroti to honor the memory of the famous ascetic and spiritual father, reports the Romphea news agency.

Elder Paisios was born in Cappadocia, Turkey, just before the population exchange between Greece and Turkey in 1924. He received the name "Arsenios" from St Arsenios of Cappadocia, who baptised him and predicted his Monastic future. In September 1924, the Eznepidis family settled in the town of Konitsa in Epirus. Arsenios grew up there and after finishing school he became a carpenter. In 1945, he was called up for the acting army where he served as a radio operator for three and a half years. After the military service he intended to enter the monastic life, but he had to help his sisters at that time.

Only in 1950 did he manage to come to the Holy Mountain and to become a novice of the future Abbot of the Koutloumousou Monastery on the Athos, Cyrillos. Then he was sent to the Esphigmenou Monastery, where the future elder labored as a novice for four years. In 1954, he became a ryassophore monk with the name Averkios and moved to the Philotheou Monastery, where he became a disciple of Father Simeon. In 1956, he was tonsured a monk with the name Paisios.

In 1958, elder Paisios moved to the Monastery of the Nativity of the Mother of God in Stomio, Konitsa, as he was asked to oppose the propaganda of Protestantism in the region. In 1962, the elder settled in Sinai, in St Catherine's Monastery. In 1964, he returned to the Athos and began to live in the Iveron Skete. In 1966, he became gravely a large part of his lungs was removed. From May 1978, Elder Paisios lived in the Panagouda cell of the Koutloumous Monastery, where he received thousands of people who came to him. In October 1993, the elder, who then had a terminal cancer, moved to St. John Theologian Convent in Souroti.

Fr Paisios was a great non-possessor, had the gift of clairvoyance, and gave spiritual advice and pastoral care to thousands of people. Elder Paisios reposed on July 12, 1994, in St John Theologian Monastery, Souroti, and was buried there behind the Altar of the Monastery Church of St Arsenios of Cappadocia.