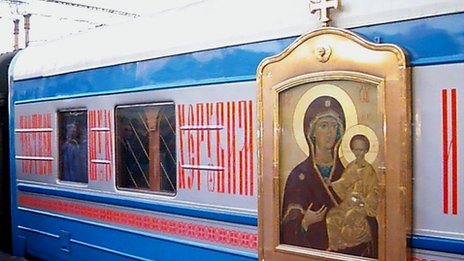 An armoured train - complete with "temple wagon" - is being rolled out to carry religious leaders to an event in Kiev, it's reported.

Russian Orthodox Church leader Patriarch Kirill will be among those taking the five-carriage train to attend celebrations marking the 1,025th anniversary of the "baptism of Kievan Rus" - the conversion of the region's pagans to Christianity, reports Ukrainian daily Segodnya. "Prayer services will be held all the way down to Kiev," it quotes a church spokesman as saying.

A railway source tells the paper the train is "like a hotel on wheels" and the manufacturer's website seems to confirm his view, displaying photographs of interiors adorned with gold leaf. The temple wagon apparently has a vestry where you'd normally find the conductor's compartment, along with the usual fixtures of a church - altar, lectern and belfry - as well as a 50-litre container for run-off holy water. Thousands of people are expected to attend the celebrations, which begin on Friday, with some 6,000 policemen on duty to maintain order.