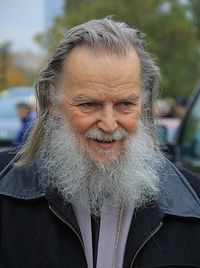 Investigators have opened a criminal case into the fatal stabbing of a well-known Orthodox Christian priest after his body was discovered in the northwestern city of Pskov, RIA Novosti reports.

The body of priest Pavel Adelgeim, 75, was found in his house in Pskov and a suspected killer has been detained, the Investigative Committee said Monday.

The suspect, who is reportedly from Moscow, is believed to have known the priest personally.

Lev Shlosberg, a Pskov region lawmaker, said on the Dozhd television channel that the priest had been killed by a mentally ill man who had stayed at his place for three days. Shlosberg said the killer was born in 1987, while the Interior Ministry said he was born in 1986.

The suspected killer had been "welcomed by Father Pavel and his wife Vera at their home upon a request from a Moscow woman they were familiar with," the official said. "He is a mentally ill person, and maybe his acquaintances hoped Father Pavel's words would cure his illness."

Shlosberg said the suspect had stabbed the priest in the stomach and then stabbed himself twice. He reportedly claimed that he was doing so "at satan's orders".

A spokesman for Patriarch Kirill, who heads the Russian Orthodox Church, said the patriarch was mourning the priest's death and praying for his soul.