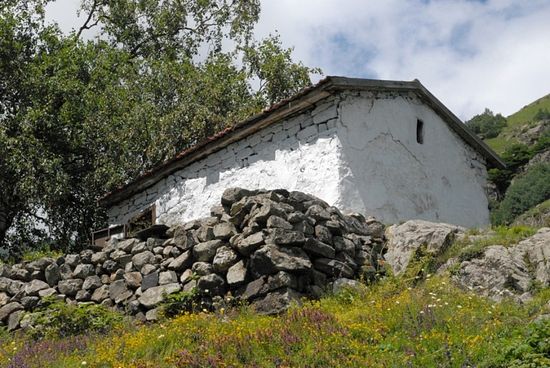 This Chapel was first mentioned in the 12th century. It was this Chapel that for 600 years kept the Mozdok Icon of the Mother of God that had been given by Queen Tamara to the Ossetians, reports Pravoslavnaya Ossetia.

On Friday, in the Kurtatin Gorge, unidentified people desecrated the Chapel of the Nativity of the Mother of God. The vandals carried out Icons from one of the most ancient Chapels that is situated in three kilometres from the Alansky Dormition Monastery.

According to the report of the Monastery's Superior Hieromonk Stephen (Dzugkoev) to Region15.ru, the vandals carried the icons out of the chapel and, most likely, threw them down the neighboring gorge. Also the stone on which the names of those who had helped repair the Chapel as early as in 1900 disappeared from the Chapel. In the view of Fr Stephen, it was probably thrown down the same gorge. According to the Father Superior, this was not the first act of vandalism in this Chapel. Similar incidents have happened three times over a year and a half.

According to the tradition, Queen Tamara gave a copy of the Iberian (Mozdok) icon of the Mother of God to this Chapel (first mentioned in the 12th century) which was kept here for 600 years.