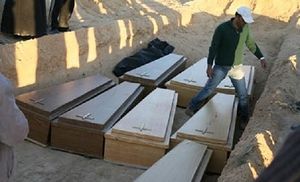 Islamist rebels entered the town on October 21; a week later, it was captured by government forces.

“What happened in Sadad is the most serious and biggest massacre of Christians in Syria in the past two years and a half,” said the prelate, according to the Fides news service. “45 innocent civilians were martyred for no reason, and among them several women and children, many thrown into mass graves. Other civilians were threatened and terrorized. 30 were wounded and 10 are still missing.”

“Some were killed and some were threatened by the bullet, by strangulation, execution and with the destruction of their houses,” the prelate added, according to a report by OCP Media News, an Orthodox news agency.

The prelate, according to Fides, continued:

The churches are damaged and desecrated, deprived of old books and precious furniture. Schools, government buildings, municipal buildings have been destroyed, along with the post office, the hospital and the clinic.

What happened in Sadad is the largest massacre of Christians in Syria and the second in the Middle East, after the one in the Church of Our Lady of Salvation in Iraq, in 2010.

We have shouted aid to the world, but no one has listened to us. Where is the Christian conscience? Where is human consciousness? Where are my brothers? I think of all those who are suffering today in mourning and discomfort: We ask everyone to pray for us.

Mass grave found in freed Christian village in Syria
After the operation that liberated the Christian village of Sadad from the Giish and Jabhat al-Nusra militants, local residents discovered two mass graves that contained about 30 bodies of men, women and children, killed at the hands of the extremists around October 26–28 this year.