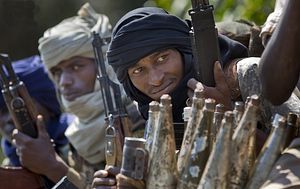 The United Nations is demanding immediate support for the Central African Republic (CAR) during a very difficult period. Apparently over 450,000 people have fled their homes after the Muslim dominated Seleka took power and began persecuting Christians irrespective of the alleged government of national unity during the transitional period. Not surprisingly, Christians are trying to protect themselves against Muslim forces within Seleka which are clearly out of control. Therefore, bloodletting is sowing the seeds of distrust and clearly the international community needs to do something before the crisis reaches a point of no return.

Unlike Christian communities in Egypt, Iraq, Pakistan, and in other nations, whereby various sects are persecuted, it is clear that in the CAR -- just like in South Sudan -- that Christians will not just sit back and wait to be slaughtered or become trapped in ghettoes. It is hoped that the international community will be fair in pointing out the real factors behind communal violence. After all, it is clear that religious tensions erupted after Seleka troops began to ransack Christian areas. However, the same media which always points out the "Buddhist" angle in Myanmar (more Christians have been killed in Myanmar than any other non-Buddhist religion in the last few decades) in relation to the persecution of Muslims in this country; they appear to loathe to point out massacres by Muslims forces in the CAR against Christians; just like the persecution of Buddhists and others in the Chittagong Hill Tracts is barely mentioned in Bangladesh.

In must be remembered that when less than two thousand people had been killed in Kosovo the West intervened rapidly and took this part of Serbia away from the indigenous Orthodox Christians. Yet when northern Cyprus was occupied by Turkey and Orthodox Christians were cleansed then Western nations did zilch apart from sell more military arms to Turkey. Similarly, when millions of black African Christians and Animists were massacred in Sudan (many forced into slavery and forcibly converted to Islam) you never had the threat of Western intervention. Likewise, the mainly Christians of West Papua are currently facing Javanization and Islamization in Indonesia but the world is turning a blind eye once more just like they did when the Catholic Timorese were massacred in vast numbers by the same forces.

"But Seleka does not rape, loot and kill indiscriminately. Rather, Seleka attacks Christians and spares Muslims, causing traditional community trust to evaporate, and creating a sectarian tinderbox."

The same author reports that Christian militias are now retaliating and massacres against Muslims are happening based on the actions of Muslim forces within Seleka. Indeed, just like you have countless militias in Libya then it is difficult to define Seleka because many are mere rogue elements which are focused on economic goals alongside anti-Christian persecution. However, while religious agitation wasn't enforced by the usual Christian leaders of the CAR, it is abundantly clear that you have an Islamist cause within all the chaos and common criminality of forces within Seleka and clearly the so-called government of national unity isn't in control of the situation.

Christian Bishop Albert Vanbuel stated "a rebellion of religious extremism with evil intentions, characterized by profanation and planned destruction of religious buildings, especially Catholic and Protestant churches" is now in power. In other words, the new government under Djotodia is based on an agenda which threatens the religious mosaic of the CAR because elements within Seleka clearly have a religious angle.

The International Crisis Group reported "The new government of national unity is fragile and faces considerable challenges. Securing the country, organizing elections, restoring public services and implementing judicial, economic and social reforms, were agreed to in Libreville and remain on the agenda. But dissension within Seleka, the proliferation of weapons in Bangui and the deterioration of the social environment could jeopardize the very fragile transition. The humanitarian situation is deteriorating: the population is suffering from deprivation, which will be compounded by the rainy season, and there are some 150,000-180,000 internally displaced people. Faced with multiple problems, the new government will have to define security, humanitarian, budgetary and political priorities. To secure the peace and stability that previous governments failed to achieve, it must develop a new disarmament, demobilization and reintegration (DDR) program and rethink security sector reform (SSR). Restoring security and promoting innovative approaches tailored to the country's needs are key to ensuring the success of the transition."

Of great concern is who is behind the funding of Muslim forces which are spreading sectarianism in the CAR? It isn't difficult to point the finger at Gulf petrodollars and similarly Sudan may have ambitions? However, currently you have no substantial findings in this regard because various specialists have provided different answers to this important question. Despite this, it is clear that Seleka is well armed (despite being disbanded this movement continues to kill and ransack) and the sectarian agenda also points to sinister outside forces.

France announced that they will send approximately 1,000 military personnel to the CAR which will top up the current 400 plus soldiers which are stationed in this nation. The Defense Minister of France, Jean-Yves Le Drian, made it clear that France would send 1,000 troops to the CAR in order to boost security. However, unlike in Mali the role of France isn't clear because will France take sides or work with the tainted self-proclaimed leader of this nation? After all, in Mali the mainly black African Muslim ethnic groups welcomed France after a mixture of al-Qaeda affiliated forces began to attack indigenous Islam in this nation alongside genuine grievances felt by the Tuareg. Yet in the CAR it is clear that Christians in many areas lack faith in the current self-proclaimed leadership which is blamed for the bloodletting and setting the fire of sectarianism.

Le Drian said "France will support this African mission with about 1,000 soldiers…We will do this in support, not as the first ones in, as we have done for Mali, and for a short period, in the range of about six months."

France 24 reports "…Le Drian said the soldiers would act as support to a 2,500-strong regional peacekeeping force deployed by the Economic Community of Central African States. The African Union will take charge of the force in December and boost its size to around 3,600 troops."

The Security Council was urged by Jan Eliasson, Deputy Secretary-General of the UN and highly respected diplomat from Sweden, to turn the CAR into an operation for the UN. He stated that "The CAR is becoming a breeding ground for extremists and armed groups in a region that is already suffering from conflict and instability…If this situation is left to fester, it may develop into a religious and ethnic conflict with long-standing consequences, even a civil war that could spread into neighboring countries."

If action isn't taken then the spiral of violence will only get worse and sectarianism will hang over the CAR. Yet, who will France, the UN and AU work with given the tainted self declared leader of this nation who clearly isn't trusted by many within the Christian community? 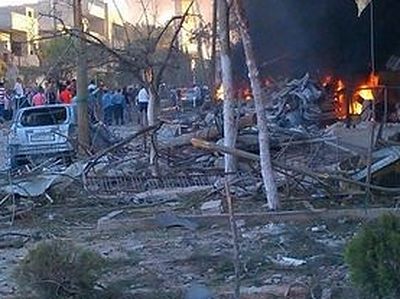 The village of Deir Atieh invaded by Islamists: Christians identified and detained