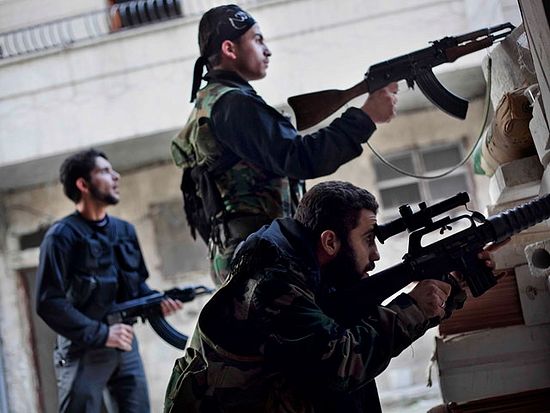 Over 80 civilians in a town northwest of the Syrian capital of Damascus have been executed by Islamist rebels, sources within the Syrian military told RT. Many others were kidnapped to be used as human shields.

Government forces are continuing a large-scale operation against Jabhat al-Nusra and Liwa Al-Islam fighters, who captured the town earlier this week. The area is located some 20 kilometers away from Damascus.

According to SANA news agency, around 1,000 militants were in the town when it was enveloped by the army on Friday.

The military sources said the “armed groups have performed an execution of civilians” in Adra, RT Arabic correspondent Abutaleb Albohaya reported from Syria.

“For now it’s established that over 80 people were killed in the areas now taken over by the army. Often whole families were murdered,” he said.

The number of executed civilians is expected to rise after government troops manage to recover the rest of the town - which has a population of around 20,000 - from the Islamists, the military source added.

“Some families were kidnapped in order to be used as human shields in areas where the Syrian army is now trying to free the civilians,” Albohaya stressed. Iraqi Al-Ahd television says this is the reason the Syrian army is abstaining from using artillery on Sunday.

“The military sources also said that the other kidnapped families were moved to the area south of Adra in the direction of the town of Douma, which has been the opposition’s strategic backland since the start of the Syrian crisis [in March, 2011]. It’s also where the most important rebel fortifications are situated,” Albohaya said.

The rebel presence remains strong in Adra, with “snipers entrenched in high-rise buildings,” he added. “Many opposition militant groups are still acting in areas outside and within the town.”

The army’s special forces have performed several successful operations against those groups, which have resulted in the deaths of dozens of militants, the military source said.

The military is storming every house and has already freed dozens of Alawite, Druze, and Christian families from the rebels, Al-Ahd reported.

The government troops have cornered a highway leading to the international airport in Damascus, which is situated four kilometers away from Adra.

The military does not exclude the possibility that militants will break through the blockade in this direction, putting the nearby town of Dahiyat al Asad in danger, according to Al-Ahd.

What the Islamist rebels did when they entered Adra on Wednesday morning was a “massacre,” one a local resident told RT.

“The situation was terrible - with killing, atrocities, and fear as the background. Unidentified armed men came into town, but it was obvious that they were Jabhat al-Nusra militants,” Muhammad Al-Said said.

“The worst crime they committed was that they toasted people in ovens used to bake bread when those people came to buy it. They kidnapped and beat up many,” he added.

According to Al-Said, the rebels committed the atrocities so they could place blame on government forces.

But the resident said that Adra citizens are “waiting for Syrian troops to save us from the terrorists, who came from other countries.”

“Those, who could, fled to Damascus. Some hid in the basement, with infants, the elderly, women, and sick people among them. The situation was really terrible,” Al-Said said.

Geopolitical analyst Patrick Henningsen sees foreign encouragement of rebel forces as one of the reasons behind the Adra tragedy.

“What it does indicate… is that there is involvement by the western intelligence agencies that have links to some of those radical jihadist groups,” Henningsen told RT. “And that has been proven throughout history and is also the case today. The first thing that needs to happen for any peace talks to succeed is that Western governments cannot be involved in any way, shape or form, either through proxies or through the intelligence agencies or third parties in arming, financing, giving aid of any kind to the Syrian opposition.”

Meanwhile, an estimated 76 people, including 24 children were killed when the Syrian government reportedly launched a series of airstrikes in rebel-held districts throughout the northern industrial city of Aleppo. Helicopters dropped barrels containing TNT explosives on anywhere between 6 and 10 districts, leveling shops, entire apartment complexes and sections of roads. It was reportedly the worst bombing raid on rebel-held territory in over 6 months.

Large swaths of the city have been decimated after rebels launched a major offensive in July 2012.

The bloody civil war has been raging in Syria for almost three years. According to UN estimates, over 100,000 people have lost their lives in the conflict.