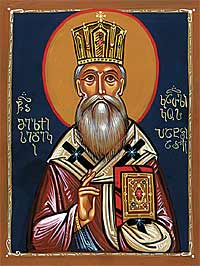 After the repose of Catholicos Svimeon, leadership of the Georgian Church passed to Catholicos Melchizedek I. St. Melchizedek led the Church from approximately 1010 to 1030, during the reigns of Kings Bagrat III, Giorgi I, and Bagrat IV.

It is believed that St. Melchizedek was the first Georgian Catholicos to be commemorated as Catholicos-Patriarch.

According to historical sources, Catholicos Melchizedek was of a noble lineage and was a pupil of King Bagrat III.

Under his leadership Svetitskhoveli Cathedral was restored and adorned. He journeyed to Byzantium to raise funds for this project, and while he was there he visited Emperor Basil II (the Bulgar-slayer). St. Melchizedek returned to his motherland with generous gifts and began the greatest construction project of the century: the adornment of Svetitskhoveli Cathedral with gold, silver, pearls, and precious stones.

St. Melchizedek made several journeys to Byzantium during his life, and historians believe that during one of those visits the patriarchs of the East approved “Catholicos-Patriarch” as the official title of the chief shepherd of the Georgian Apostolic Orthodox Church.

History has preserved St. Melchizedek’s will, in which he bequeathed a long list of holy objects, monasteries, and villages to Svetitskhoveli Cathedral. In his will the chief shepherd of the Georgian Church is referred to as “Catholicos-Patriarch.” Melchizedek’s will also reveals that he specified the location where he wished to be buried.

Like Noah didst thou bestow upon thy nation an ark of holiness, and like a bride of Christ didst thou adorn the Church with living jewels. O Holy Hierarch Melchizedek, make us worthy of eternal blessedness!

Saint Ioane (Chrysostom) the Catholicos (†1001) Archpriest Zakaria Machitadze Catholicos Basil III’s “Story of St. Shio’s Miracles” describes how the hitherto childless parents of St. Ioane prayed at length to St. Shio of Mgvime. After the birth of Ioane, his God-fearing parents sent him to be raised at Shio-Mgvime Monastery. There he acquired the sanctity and wisdom for which he would later be called “Chrysostom,” meaning “golden mouth” in Greek. By this name he has been known throughout the history of the Georgian Church.

Catholicos-Patriarch Ilia II relates a miracle that once happened to his mother “I want to recall my childhood. There was no Sunday or Saturday, when our father, mother, and all of us children missed a church service. Once during the service mother said to us, children: “Stay here, and I will go out.” 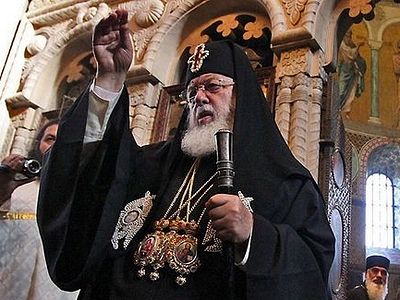 Catholicos-Patriarch of All Georgia turns 82