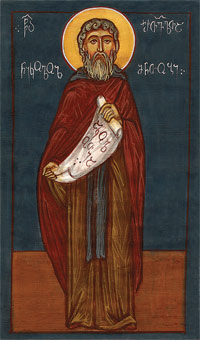 Saint Nikoloz was the author of many church services, but little else about his life is known.He lived in the second half of the 13th century, and the last years of his life coincided with the reign of King Vakhtang III (1298, 1302–1308), the son of the holy king Demetre the Devoted.

St. Nikoloz was one of the greatest hymnographers and spiritual figures of his time, but few of his works have been preserved. Catholicos Anton I writes that Nikoloz composed numerous canons and services, including a “Canon of Supplication for Rain.” St. Nikoloz enriched the spiritual literature of Georgia with his translations as well. Scholars and historians believe that, as the greatest liturgist of his time, he was probably asked to translate many prayers and services from Greek to Georgian. Among them, they believe, was the “Canon for the Blessing of Holy Water.”

The famous 19th-century historian Platon Ioseliani writes that other church services belonging to the pen of St. Nikoloz are included among the manuscripts of the Iveron Monastery on Mt. Athos.

Thou didst glorify the Holy Trinity and emulate the angels, and thou art ranked among the saints, O thrice-blessed Father Nikoloz. We praise and glorify thee, who art the protector and preserver of those who celebrate thy holy name!

Venerable Ekvtime of Mt. Athos, the Translator(†1028) Archpriest Zakaria Machitadze Venerable Ekvtime of Mt. Athos was the son of St. Ioane of Mt. Athos, a military commander during the reign of King Davit Kuropalates, who abandoned the world to enter the monastic life.While St. Ioane was laboring on Mt. Olympus, the Byzantine emperor returned a large portion of the conquered Georgian lands, but in exchange for this benefaction he ordered that the children of certain eminent aristocrats be taken to Constantinople as surety. 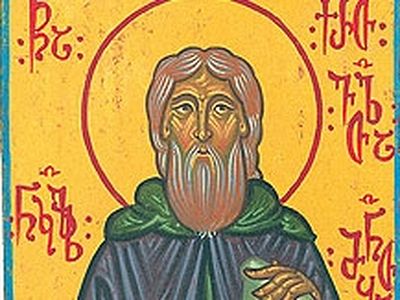 Holy Martyr Nikoloz Dvali (†1314) Archpriest Zakaria Machitadze Nikoloz Dvali, one of the great saints of the Georgian Church, was distinguished by his love for Christ from his youth. His parents began preparing him for the monastic life on the day he was born. Thus he was dedicated to God from his infancy.

An avenue now named after great Georgian elder Gabriel (Urgebadze) It was the holy archimandrite’s sister and 3,000 parishioners of Georgian churches together with her who appealed to the Georgian Patriarchate and the municipal authority with the request to rename Cholokashvili Avenue to St. Gabriel Avenue.
Комментарии
Войдите через FaceBook ВКонтакте Яндекс Mail.Ru Google или введите свои данные: