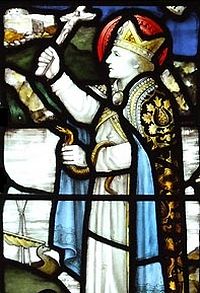 A stained glass window of St. Carantoc
St. Carantoc was a Celtic missionary, ascetic and abbot, who lived in the 6th or 7th century. Very few details of his life survive. He was born most likely in the present-day county of Ceredigion in western central Wales and was the grandson of a local ruler. St. Carantoc founded the monastery of Llangrannog (named after him) in Ceredigion and became its abbot. Today Llangrannog is a Welsh seaside village and resort. Later the saint labored in western England, particularly in the county of Somerset where he established a monastery at Carhampton.

With time, together with other monk-missionaries, he moved to Cornwall where he continued his tireless activities. Through the joint efforts of St. Carantoc and his companions central Cornwall was enlightened, though we possess little information on his labors in evangelizing this territory. Most probably the holy man built a church in the settlement called Crantock which was named after him and where an ancient church is dedicated to him to this day. It is known that the historian and chronicler William of Worcester (c. 1415-c.1482) described a chapel in honor of St. Carantoc near Padstow in Cornwall as well as a holy spring associated with him; water from this spring healed many people from intestinal diseases. 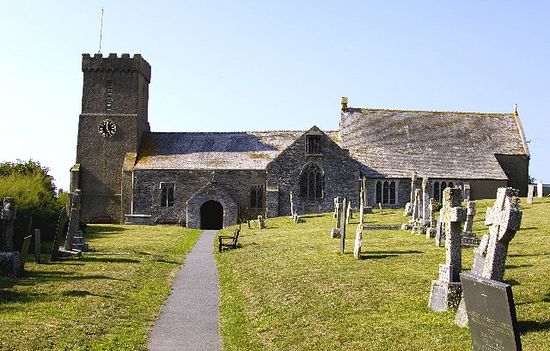 Later a learned Cornish antiquarian named Nicholas Roscarrock (c. 1548-1634; who suffered much and was persecuted for his Catholic faith and later compiled a dictionary of British and Irish saints, including little-known Cornish saints and sites associated with them) described another church dedicated to St. Carantoc in Cornwall (it may have been the same church at Crantock) that had seven dependent chapels, which indicates its considerable importance at that time. Every year on the feast of St. Carantoc (May 16), members of all the neighboring parishes used to come to this church with relics of saints from their own churches. They placed these relics on the altars of the mother-church and its seven chapels and then celebrated solemn services.

Hagiographers of St. Carantoc state that he once made a successful missionary trip from Cornwall to Ireland, where he preached near Dulane in County Meath and in Leinster. In Ireland he was said to have healed one of his disciples from leprosy. It is quite possible that St. Carantoc, like many other Celtic saints living in Cornwall and Wales, for some time lived and labored in Brittany where he is known as Carendec.

According to tradition, St. Carantoc had to leave his beloved Cornwall (where attempts were made to make him a ruler against his will) and to settle in Wales where he continued his energetic labors for Christ and constructed several churches. Many legends are connected with this saint. Thus, one tradition relates that he had a tame dove which always accompanied him. This dove pointed him to the very site where the saint was destined to build a monastery: according to tradition, when Carantoc on his arrival to Cornwall decided to collect brushwood and kindle a fire, his dove took one twig into its beak, flew away some distance and threw it on the ground. And it thus was revealed to the saint that he must found a holy monastery on that spot. 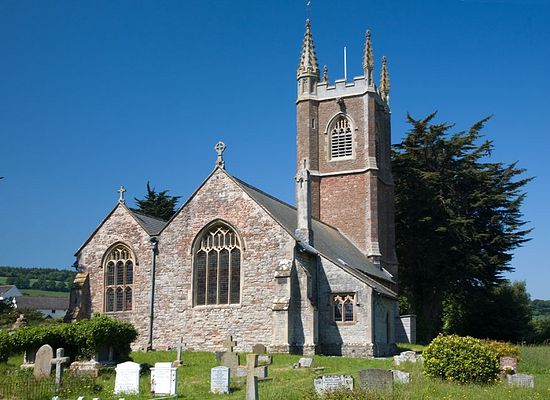 Church of St. John the Baptist in Carhampton, Somerset

Another story tells that St. Carantoc always carried his little portable altar with him. But once he lost this altar because of a quarrel with the rulers of Devon or Somerset. In order to “deserve” to get back his altar, the saint had to fight with a terrifying dragon, or serpent, which was said to terrorize the local population (obviously it was a demon). The man of God vanquished the dragon with the power of his prayer and in gratitude for this deed the rulers endowed him with lands to establish a monastic community in Carhampton (now the medieval Church of St. John the Baptist, intentionally built for laypeople, stands near the site of the former monastery though the original monastery church has not existed here for a long time). According to some sources, St. Carantoc reposed and was buried in Ireland, though it would seem more logical that his relics remained in Cornwall. 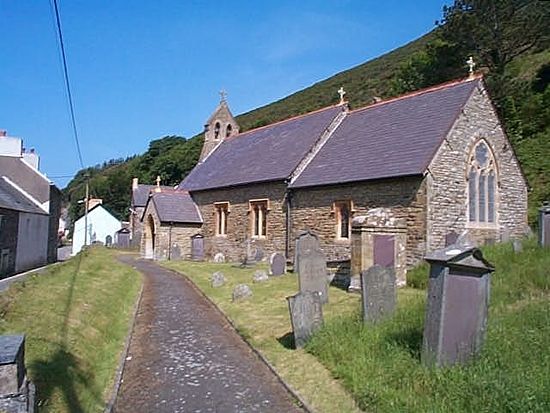 St. Carantoc is venerated by some in South Wales, Somerset, Cornwall, Brittany and Ireland to this day. Today St. Carantoc remains the patron-saint of Llangrannog in Wales, of Carhampton in Somerset and Crantock in Cornwall. A parish church in the coastal village of Llangrannog in Ceredigion is dedicated to St. Carantoc. The saint also lived as hermit in a cave above the village and used the local holy well nearby. This panoramic village is famous for the fact that it was loved and visited by great English composer Edward Elgar (1857-1934) and the Welsh artist Christopher Williams (1873-1934) who painted a picture there. Llangrannog also has a statue of St. Carantoc. 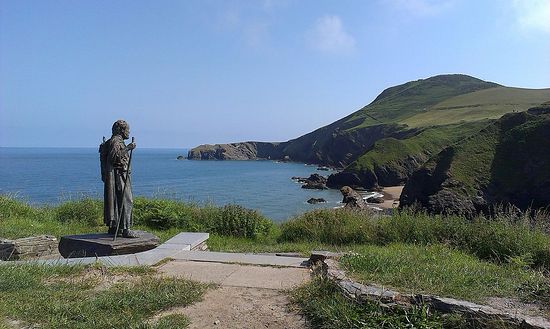 The village of Crantock in Cornwall has more than a 2000-year-old history. The first chapel here was erected by Irish monks as early as the 5th century. The former name of this settlement is “Langurroc”, which means “monks’ dwelling”; this is indicative of the existence of a Celtic monastery on this site very many centuries ago. Incidentally, one of the streets in this village is still called St. Carantoc Way. The local Norman church is dedicated to St. Carantoc and the original church that stood in its place had been built by the saint himself. In the experts’ view, this is one of the most beautifully decorated churches of Cornwall. Stained glass windows relate the life of Carantoc, its founder and patron. In ancient times, pilgrims walked to the Crantock church by the so-called “monks’ route” that went through several settlements where memorial crosses were erected. Some of those crosses still survive, for example in Penpol and Trevemper. The commune of Carantec in the Finistere department of Brittany, France, is also named after St. Carantoc.

Holy Father Carantoc, pray to God for us! 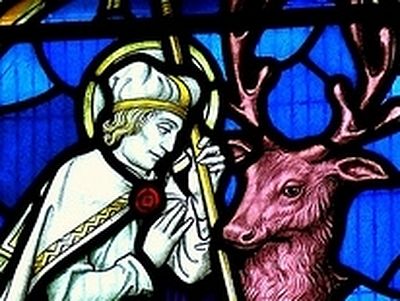 Venerable Cadoc, Abbot of Llancarfan in Wales Commemorated: January 24/February 6 and September 25/October 8 Dmitry Lapa St. Cadoc (c. 497 - c. 580) was the founder of the famous monastery of Llancarfan (c. 518) in the present-day Vale of Glamorgan in Wales. This monastery was to become one of the best-known in Wales, as well as a great centre of learning. 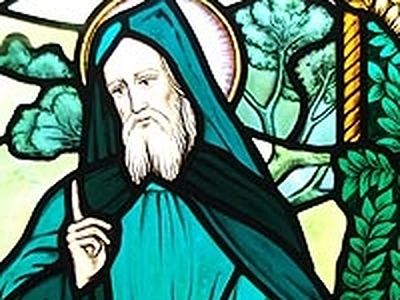 Venerable Beuno, Abbot of Clynnog Fawr in Wales Commemorated April 21/May 4 Dmitry Lapa Of the life of Venerable Abbot Beuno, probably the greatest saint in North Wales, we know very little. His Life was written many years after his repose, but even the bloody 16th-century Reformation could not erase the memory of this saint of God. 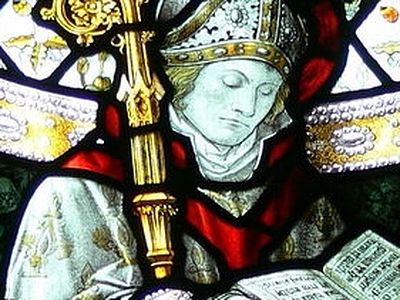 Holy Hierarch Asaph of Wales Commemorated May 1/14 Dmitry Lapa Veneration for St. Asaph was so strong that with time the town where his diocese was centered was renamed to St Asaph in his honor. The monastery and cathedral associated with the saint were very famous.
Комментарии
Raphael29 мая 2015, 10:00
Thank you so much Mr Lapa for your articles on British saints. I'm French but I'm both a lover of England and an Orthodox Christian. So are you and Fr Andrew Philips of Colchester. To most Orthodox people, it seems contradictory to love a western country and pretend to be faithful to the teachings of the One and Only True Church. But we know that somehow the old spirit of England has survived through the ages despite the schism and Britain's isolation from the True Faith. Most probably this is an effect of our Lord Jesus's prayer for Christian unity (John 17), which must to a certain extent prevail behind the surface of heterodoxy, so that England may be revived when the set time has come. Dear Saint George, Patron of England, please carry my prayer unto the Shepherd : Lord Jesus, Son of God, thank you for your blessings and for Dmitry Lapa. Have mercy on the people of England. Help them recognize the One who sent them blessings and turn to You with a thankful and repentant heart, in the Name of the Father, the Son and the Holy Spirit. Amen. Raphael, from Lille