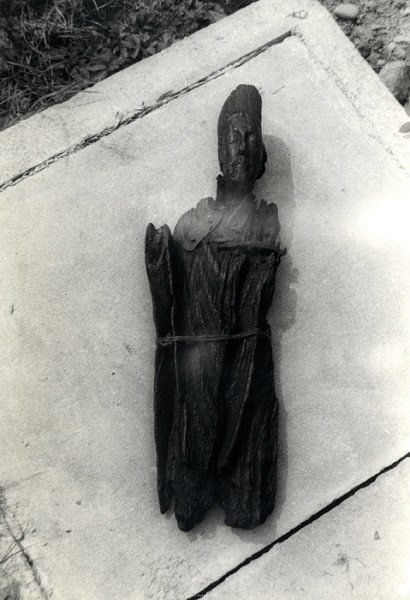 St. Maelruain (also spelled Maolruain) is venerated as the founder and first abbot of Tallaght Monastery in present-day County Dublin in Ireland, as well as the compiler of the martyrology of the same name with the lives of saints. By tradition he is considered to be one of the leading figures in the Irish monastic movement known as the Culdees (Celi-De) that flourished mostly in Ireland and Scotland from the eighth to the twelfth centuries. Unfortunately, very little information on this wonderful saint survives. It is not even known for certain whether he was only Abbot of Tallaght or abbot and bishop simultaneously. 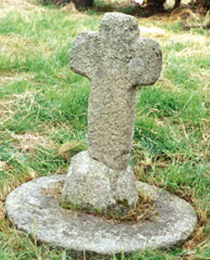 Ancient Cross in the churchyard of St. Maelruain's Church in Tallaght
“Maelruain” is not the baptismal name of the saint—rather, it was his monastic name. The form “Maelruain” consists of two parts: “mael” (from the old Irish) meaning “he who was tonsured”, and “ruain”—“referring to the saint with the name Ruadan”. It thus can be concluded that St. Maelruain was trained and became a monk in the monastery founded in the sixth century by St. Ruadan (one of the closest disciples of St. Finian of Clonard) in Lothra in present-day County Tipperary. The Martyrology of Tallaght briefly says that Maelruain “came here with the relics of holy martyrs and virgins”—obviously to establish a monastery there. The Book of Leinster also mentions that in the year 774 the monk named Maelruain obtained lands in Tallaght from the King of Leinster. To all appearances, the foundation of Tallaght Monastery is meant here, though the annals of that time are silent about this. However, the Irish annals do point to the saint’s death and call him “a bishop” and “a true warrior of Christ” at the time of his repose.

This holy man contributed immensely to the restoration of spirituality and serious monasticism in Ireland in the second half of the eight century. Under his influence the monastic life and asceticism in the country reached a high level such as can only be compared with that of the era of the great founding fathers of Irish monasticism of the sixth century. Invaluable documents, attributed to Maelruain (and/or, probably, to his leading disciples who wrote under his direction), still survive. These are the following manuscripts: The Teaching of St. Maelruain (surviving in early modern Irish); the Rule of the Celi-De (instructions in monastic and liturgical life); and the Monastery of Tallaght (a collection of teachings of St. Maelruain which, by the way, were based on the instructions of the Egyptian desert fathers as well as of St. John Cassian).

Ancient font in the churchyard of St. Maelruain's Church in Tallaght
The rule of St. Maelruain devotes much attention to fasting, praying, and repentance to one’s confessor, whom the Celts called “the soul’s friend.” In addition to this, under the influence and direction of Maelruain the most ancient Irish martyrologies were composed: the Martyrology of St. Oengus (written by St. Oengus the Culdee—a very close disciple of Maelruain—in verse: it is a calendar of early Irish and non-Irish saints); the Martyrology of Tallaght (also compiled, most likely, by St. Oengus, this time in prose); and the Stowe Missal (containing unique recordings of ancient Irish liturgical texts). Early in the ninth century an ancient Irish penitentiary was most probably written in the monastery.

Tallaght Monastery became the center of “the Culdee movement” that strove for a return to the ascetic life of earlier times. This word can be translated as “worshippers”, or “servants”, or “companions of God”. This movement had a favorable impact on the monastic life of Ireland and was really vital at that time, as many monastic centers of the country were then departing from the traditional ascetic rules of Irish Orthodoxy.

In Tallaght Monastery spiritual guidance was at a very high level, the thorough confession of sins was compulsory, and learning and manual work were particularly encouraged. Special attention was given to mutual prayer, frequent reading of the Psalter, genuflexion and prostration in prayer. The mortification of the flesh was encouraged as well as strict ascetic practices, such as prayer in cold water (which can be met in the lives of many Celtic saints) with arms raised up in the form of the cross, and full abstinence from alcoholic drink. The Mother of God and the Holy Archangel Michael were especially venerated in Maelruain’s Monastery as its chief patrons. Maelruain used to say that the three most profitable things throughout the day should be “prayer, manual labor, and study”; monks should never be idle, so during the day they will obtain much profit from reading, writing, sewing clothes and doing other useful things; but the most blessed activity is labor with prayer.

All these and many other practices spread to a majority of the Irish monasteries of that time that joined the Culdee movement. Remarkably, the Culdees discouraged and even forbade the practices of “pilgrimage”, or “wandering for Christ” so characteristic of Celts—as well as moving from one monastery to another, sea voyages and settling abroad. The Culdees, on the contrary, preferred a settled communal (as opposed to nomadic) life within their monasteries and solitude, far from the world outside with its hustle and bustle (interestingly, this love for seclusion and retirement was always so typical of Celts). Communities of Culdees (commonly consisting of thirteen members, following the example of Christ and the apostles) usually settled in extremely remote places, resembling what we now call sketes; but they were in fact full-fledged monasteries. 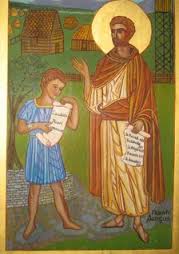 St. Maelruain
In time, Culdee communities with their sincerity and candid, open-hearted aspiration for holiness began to attract laypeople as well. Some groups of laypeople gradually started to form their own small communities. They were like villages, situated in wild, remote areas, and people lived there in piety together with their families, without being tonsured or veiled, practicing farming and manual work, and, most significantly, often praying and singing spiritual hymns. It can be said for certain that the Culdees became true spiritual successors of such great holy fathers as Columban, Columba (Columcille), Kevin, Comgall, and many other ancient saints, preserving and reviving their spirit of sanctity and ascetic traditions. They remind us of the Greek kollyvades of a much more recent era.

Maelruain reposed in the Lord in 792, and after his repose was venerated as a saint. He had many disciples, among whom perhaps the most famous was St. Oengus, whom we mentioned above. Oengus honored and appreciated his beloved mentor and teacher so much that he called him “the great sun of the south plain of Meath”. The Culdee movement spread to most of Ireland, Scotland and even parts of England, but closer to the Norman Conquest it began to fade away, and a few generations after the Norman Invasion the last remaining communities of Culdees were dissolved. (The Roman Catholic Church, especially after the Anglo-Norman invasion of Ireland, brought with it a strict hierarchy to these Celtic lands, and in this new system there was no room for Celtic asceticism and the Celtic Church—unique in its way, with its lack of a strict hierarchy).

Tallaght Monastery, located several miles southwest of the present-day city of Dublin, existed until the Reformation. In 1651, the former monastic buildings were severely damaged under the iconoclast Oliver Cromwell. In 1829 a new church (belonging to the Anglican Church of Ireland) in honor of St. Maelruain was constructed on the site of the original monastery, partly with the use of the remaining fabric of the ancient abbey. Only a tower survives of the previous church that stood on the same side. Near the entrance to the churchyard to this day there stands an ancient baptismal font, known as “St. Maelruain’s losset”. To the south of it an early cross on a pedestal dedicated to the saint can still be found. 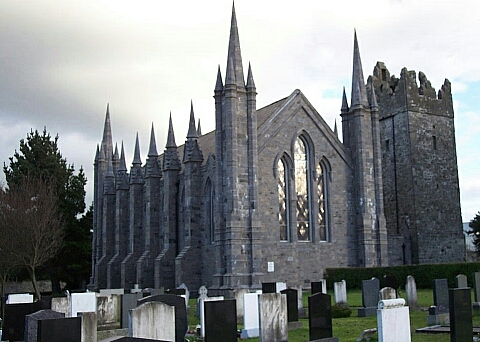 Formerly no more than a village, today Tallaght is a lively, rapidly growing and developing town and suburb of Dublin with the River Dodder flowing through it. Monastic life, though not in the Orthodox tradition, did resume in Tallaght: since the second half of the nineteenth century there has been a Roman Catholic Dominican Priory with a seminary dedicated to the Mother of God. Thus, already for over twelve centuries, prayer and service to the Lord have been permanently present in this holy place.

Holy Father Maelruain, pray to God for us! 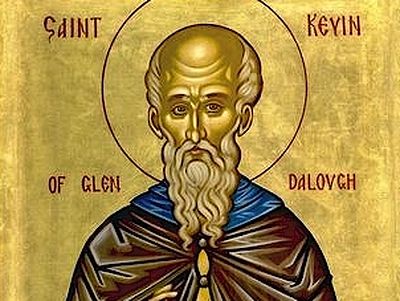 Venerable Kevin of Glendalough, Wonderworker Commemorated: June 3/16 Dmitry Lapa St. Kevin is one of the greatest saints of Ireland and founder of the famous and important Glendalough Monastery.
Комментарии