European Parliament asked how it will respond to 'atrocities'

Planned Parenthood, already under investigation in nearly a dozen states, in Congress, and even facing the potential of criminal charges after an undercover video investigation revealed executives discussing the sale of body parts of unborn infants, on Friday saw its problems go global.

The Alliance Defending Freedom, a pro-life organization of thousands of lawyers who fight on behalf of life, religious rights and more, revealed that a member of the European Parliament has submitted questions to the European Commission about what that group will do with Planned Parenthood.

Miroslav Mikolášik, the ADF reported, has “asked the commission if it is aware of the videos produced by the Center for Medical Progress, if it intends to condemn Planned Parenthood’s actions and suspend funding until U.S. authorities complete a thorough investigation, and if it intends to prevent Planned Parenthood from joining the European Commission’s lawsuit against the ‘One of Us’ European Citizen Initiative, a grassroots effort to end the commission’s funding of abortion.”

The questions were posted on Facebook, and point out that Planned Parenthood is “a major recipient of EU funds for development aid.”

“As a report by European Dignity Watch revealed in 2012, these funds are heavily used to fund abortions outside the EU, including in countries where abortion is illegal,” the MEP noted.

“Is the commission aware of this practice and the video evidence published by the Center for Medical Progress?” he asks. “Will the commission condemn this practice and suspend all direct or indirect funding of Planned Parenthood facilities, projects or programs until such time as the U.S. authorities have carried out a thorough investigation into the matter?”

“No one should be forced to fund a wealthy corporation caught on camera negotiating the sale of baby parts,” said Sophia Kuby, the ADF’s spokeswoman based in Brussels. “The money of the people of Europe should not be used for such atrocities. We hope the commission will respond to the MEP’s questions by saying that it will act immediately to suspend funding for Planned Parenthood in light of these developments.”

ADF said the questions were submitted under Rule 130 of the parliament’s rules of procedure, and question whether the commission will “condemn this practice.”

Three U.S. states already have suspended funding of the group.

WND only just reported on a letter that was sent by one member of the board of the CMP to Planned Parenthood demanding a retraction of statements by its president, Cecil Richards.

She repeatedly has attacked CMP for releasing the videos, and has said, “The folks behind this, in fact, are part of the most militant wing of the anti-abortion movement that has been behind, you know, the bombing of clinics, the murder of doctors in their homes, and in their – in their churches – that’s what actually needs to be – to be looked at.”

CMP board member Troy Newman, head of Operation Rescue, has dispatched a cease and desist letter to Richards and Planned Parenthood, demanding a full retraction.

“I cannot stand by while Planned Parenthood’s Cecile Richards and ABC News air false allegations against me that are now being repeated as fact in numerous news sources,” Newman said in a press release.

“I have never condoned violence against abortion providers or businesses and Richards’ patently false statements against me must be retracted,” he said.

Richards’ statements were voiced in the July 26 edition of ABC’s “This Week with George Stephanopoulus,” when she accused the Center for Medical Progress of advocating violence, including, “the bombing of clinics” and “the murder of doctors in their homes, and in their churches.”

Operation Rescue is a mainstream pro-life organization that engages in “non-violent civil disobedience at abortion facilities,” specializing in “documenting and reporting substandard and unlawful practices within the abortion industry.”

He cited dozens of online and other news sources that have repeated the unsupported allegation of condoning and encouraging murder and clinic bombing.

But her claims are patently false, wrote Susan Michelle for Live Action News:

“She’s alluding to Dr. George Tiller, the late-term abortion doctor who was murdered in church by a man who acted independently. Scott Roeder, who killed Tiller, would call Operation Rescue on the phone (as any member of the public can do), but he was not part of their group. Operation Rescue’s Troy Newman, sits on the board of CMP, so the abortion giant is trying to tie CMP to murder.”

“Then came Scott Roeder, who acted in frustration borne out of ignorance … He shot and killed Tiller on May 31, 2009, claiming that all legal avenues had been exhausted and that his action was necessary to save the lives of pre-born babies. Nothing could have been further from the truth … Roeder was no hero.”

WND has also reported that as horrific as the videos appear, they should surprise no one, since such practices have been documented for nearly two decades already.

One price list uncovered by a pro-life organization dated June 1998 shows that the price per specimen from a second trimester abortion is $90 fresh and $130 frozen.

Mark Crutcher, whose Life Dynamics organization was a ground-breaker in investigating the abortion behemoth that gets some $500 million annually from U.S. taxpayers, worked on that investigation.

His group reported back in February 2000 how the baby parts market works: "A baby parts 'wholesaler' enters into a financial agreement with an abortion clinic in which the wholesaler pays a monthly 'site fee' to the clinic. For this payment, the wholesaler is allowed to place a retrieval agent inside the clinic where he or she is given access to the corpses of children killed there and a workspace to harvest their parts."

He continued: "The buyer – usually a researcher working for a medical school, pharmaceutical company, bio-tech company or government agency – supplies the wholesaler with a list of the baby parts wanted. … when such orders are received … they are faxed to the retrieval agent at the clinic who harvests the requested parts and ships them to the buyer."

The documentation was provided at that time to Life Dynamics by a worker who left Comprehensive Health for Women, a Planned Parenthood abortion clinic in Overland Park, Kansas.

Among the documents was a "Fee-for-Services" Schedule A, effective June 1998, which outlined a charge of $220 per specimen for first-trimester aspiration abortions and $260 if the baby parts were frozen.

He also sold three orders of blood from the unborn child. The retrieval agent "harvested all of the parts," the report said, explaining that "in order for the blood of an aborted child to be sold, the dead baby had to be brought to him intact."

The "specimens," the report said, would have generated up to about $25,000 in revenue for one month from one retrieval agent at one Planned Parenthood business.

Crutcher reported that the tissue logs reveal that one baby is often chopped up and sold to many buyers.

For example, babies taken from donors 113968 and 114189 were both killed late in their second trimester and cut into nine pieces. By applying the price list, buyers would have been invoiced between $3,510 and $5,070 for these parts, he said.

8 States Open Probe Into Planned Parenthood 'Abhorrent practice' funded by 39 U.S. companies In the wake of two undercover videos exposing Planned Parenthood executives’ nonchalance in discussing prices for “donated” baby body parts, momentum is increasing in Congress to defund the organization, which is the leading provider of abortions in the U.S. But it’s not just Congress that Planned Parenthood has to worry about. Kansas became the eighth state Wednesday to also open an investigation into the abortion provider. 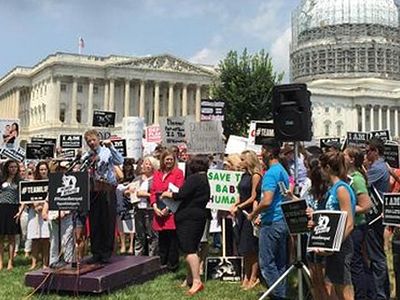 Americans Take to the Streets in "Women Betrayed!" Rallies Against Planned Parenthood

Americans Take to the Streets in "Women Betrayed!" Rallies Against Planned Parenthood Thousands of Americans took part Tuesday in rallies throughout the country calling for the investigation and defunding of Planned Parenthood.
Комментарии