The Incorrupt Relics of Sts. Job and Amphilochius

For the blessing of the Venerable St. Job, the abbot and the wonderworker of Pochaev, believers can go down to the Caves Church. His incorrupt relics rest in a silver shrine in a stone shelter in the temple. The Venerable Job was born in Pokuttya (Ivano-Frankivsk region today) in 1551. At the age of ten, caring for God and seeking a private devotion, Ivan left his parents and was accepted into the Ugornits Monastery. He took vows two years later and amazed everyone with his mildness, eagerness, and diligence in prayer; and became a true model of the monastic life. By the request of Prince Constantine of Ostrozh, Hieromonk Job was transferred to the Dubno monastery to give an example of monastic feats to the brothers. For more than twenty years he served as the abbot of this monastery, actively defending Orthodoxy against its enemies.

Avoiding the glory of this world, in 1604 he secretly left for Pochaev hill. Soon he became famous there for his strict monastic life, and eventually was elected by the brethren as abbot. All his life he spent in manual labor, performing feats and prayers. He endured many sorrows and offenses from Poles who intended to take away the monastery and convert it to Catholicism; from Andrew Firley, a grandson of Anna Goiska, who neglected her “Fundusheva Gramota (“Writ of Endowment”) and took back everything that was kindly presented to the monastery by the land-owning woman, including the wonder-working Icon. The stronger and more persistent were the attacks against Christians the more relentlessly St. Job guarded the monastery entrusted to him. With his sermons and precepts, with his spiritual purity and pious life the abbot disclosed the essence of earthly human existence. 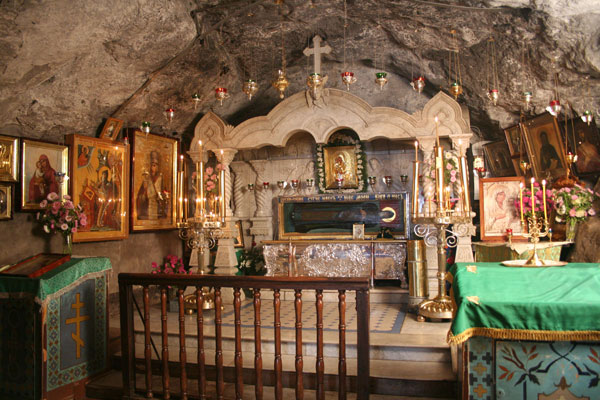 The relics of St. Job of Pochaev

As was predicted by him seven days prior, he departed to a blessed eternity and after almost eight years his relics were uncovered and found to be incorrupt.

The relics of the Venerable Amphilochius of Pochaev rest in the Caves Church in the same stone shelter as St. Job’s relics. St. Amphilochius was born in 1894 in the Volyn region, in the village of Mala Ilovytsya into a pious family with many children. He spent his childhood in his native village together with the family, and later he served in the Tsar’s army. Having gone through military trials, he chose a narrow way of salvation—the monastic life, and came to the Pochaev Lavra in 1925. As a young monk he bore his obedience with love of labor and humbleness and was considered worthy of ordination to the priesthood with the name of Yosyp. Having dedicated all his life to God and neighbors, Saint Amphilochius acquired a strong faith and great love. God gifted him with the grace of prophecy and the performing of miracles. He healed, exorcised, made the deaf to hear, the blind to see, and consoled the mournful.

He did not leave the holy Lavra during persecutions, but rather together with the brothers he endured, praying to God day and night. With his braveness and courage he protected the Holy Trinity Cathedral. Therefore he was arrested and taken to a psychiatric hospital in Budanov, but by the providence of God he was released by good people who knew him. The authorities forbade him to return to the Lavra and so he settled in his native Ilovytsya, where for many years he served people with love, avoiding human glory in every possible way. St. Amphilochius ended his earthly journhey on January 1, 1971 and was canonized on May 12, 2002. 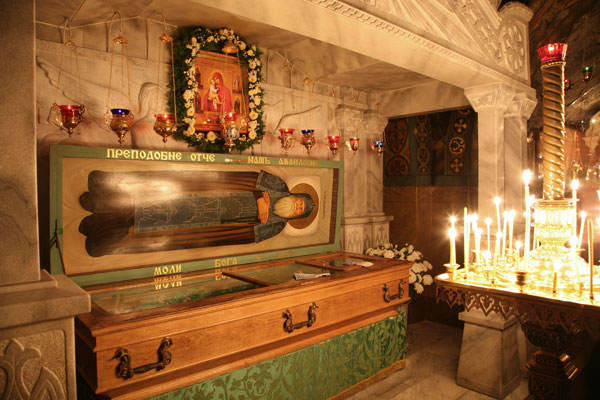 Relics of St. Amphilochius of Pochaev 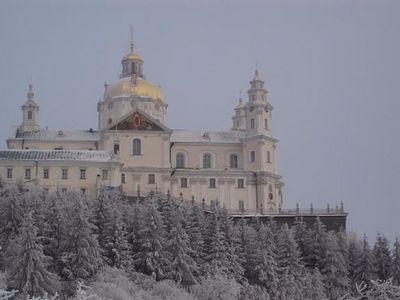 The Miracle of the Moving of the Waters at Midnight in Pochaev Lavra Then novice Igor Brus walked up and told me conspiratorially, “Don’t sleep tonight, or you’ll sleep through the whole Kingdom of Heaven! Come at midnight to the well. We’ll look at the bottom and see if the Lord will give us a sign—if it will “boil” as it is blessed. Tomorrow is the “Jordan” 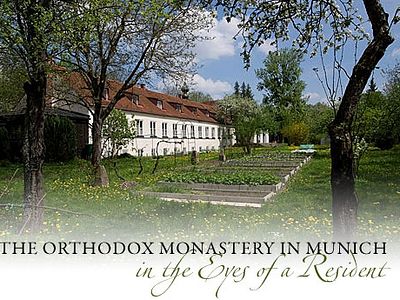 The Monastery of St. Job of Pochaev, Munich. Photo Essay

The Monastery of St. Job of Pochaev, Munich. Photo Essay Daily life in the only men's monastery in Germany, dedicated to St Job of Pochaev, headed by His Eminence Archbishop Mark (Arndt) of Germany. Monk Joseph (Bandmann), an Orthodox German, reports on life in the monastery he has lived in for nine years. On the left is a meadow, pond and the white walls of Blutenburg Castle. On the right are quaint German houses of Pasing. Between them is the Monastery of St Job of Pochaev, which adheres to the Mt Athos monastic rule. 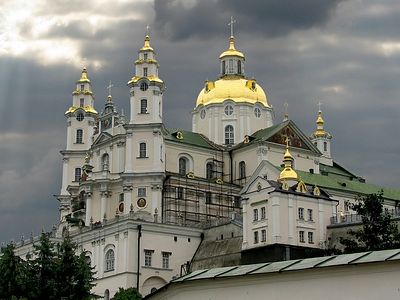 The Pochayiv Lavra appeals to the Ukrainian authorities about impending threat