Behind the Monastery Walls

The monastery is the sacred home of God, but also home to the nuns and monks who have dedicated their lives to God. Romania’s monasteries are known worldwide for their magnificent beauty, but what do we know about the people that live there? How different is the life they lead? How different is the way they see the world?

Behind the Monastery Walls presents a selection of intimate and inspiring interviews in which nuns and monks in Romanian monasteries lay bare their thoughts and real beliefs.

Behind the Monastery Walls is one Orthodox Christian's graduation film from the BA in Media Production program at Coventry University. Having received a scholarship from the Peter Kirk Memorial Fund supported by the European Parliament he produced 2 short documentaries which talks about monastic life in Romania (Behind the Monastery Walls) and in England (Sisters in Love). 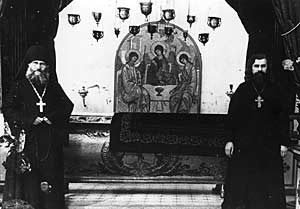 May God Give You Wisdom! The Letters of Fr. John Krestiankin. Letters to Laypeople. Part 4 Archimandrite John (Krestiankin)

May God Give You Wisdom! The Letters of Fr. John Krestiankin. Letters to Laypeople. Part 4 C., every man has to choose his own life’s path. This is so that no one can hide behind another person’s back.

Mozaicon. Vibrant Romanian Mosaics Mozaicon was started by a group of Romanian fresco artists who came together in 2008 to create the mosaics for the Patriarchal Cathedral Complex in Bucharest.

A portrait of elder Arsenie (Boca) is “weeping” in Vaslui, Romania Residents of the Romania’s Vaslui county are convinced that late Hieromonk Arsenie (Boca; 1910-1989, a prominent elder and confessor) is truly working miracles.
Комментарии