'It's a Whole Other World': Religious Pilgrims Venture Deep into Alaska Forest 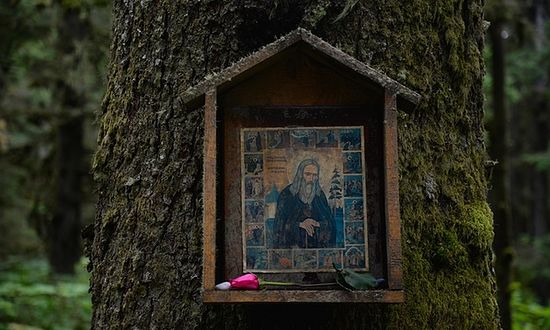 Since he became a canonized saint in 1970, Father Herman is drawing a more international crowd to Kodiak, Alaska. Photograph: Ryan Schuessler

Celeste Englehardt has traveled all over the world to pray.

A Russian Orthodox Christian from Washington, DC’s Virginia suburbs, Englehardt’s faith has taken her to Jerusalem, Ukraine, Moldova – even to the ruins of ancient Orthodox monasteries in Ireland. And now an island in Alaska’s Kodiak Archipelago is among the holy sites she has visited.

“Sometimes you can’t describe things,” Englehardt said, sitting on a beached log on Spruce Island in the Gulf of Alaska, choking back tears. “Because you feel it in your heart and your soul, and there’s a peace. There’s a peace beyond understanding.”

In August, Englehardt was one of some 200 pilgrims who descended upon the Alaskan fishing town of Kodiak to honor a Russian Orthodox saint who lived and died in the archipelago centuries ago.

Indigenous Alutiiq people have been making the journey across this short stretch of the Gulf of Alaska to Spruce Island for centuries, and pilgrims come here year round. But the August pilgrimage has come to draw large international crowds – including a growing number of Russians – since Father Herman became North America’s first canonized Orthodox saint 45 years ago. 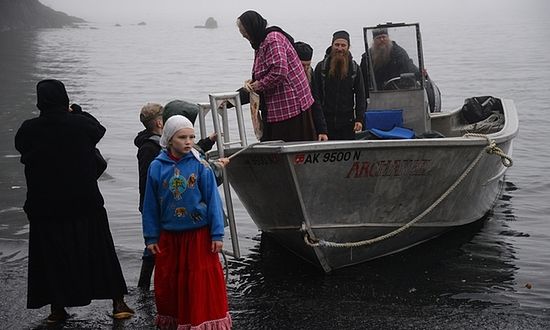 On a foggy morning, the pilgrims gathered at Kodiak’s harbor to board a mismatched collection of boats to make the journey to where Father Herman lived.

Local fishermen volunteer their vessels and time for transport. Powering past patches of dark green kelp and the occasional orange jellyfish standing out against the dark blue water, towering spruce trees and rocky cliffs begin to emerge out of the fog. A small, golden dome is visible through the trees.

“When you enter the forest and go to the church, it’s like a whole other world,” said Ted Panamarioff, a Kodiak resident and pilgrim. “You can’t see the world outside it, because it’s in the middle of an old growth forest. Being alone in the middle of it with your thoughts and your experience, you become one with it.”

Walking along a moss-paved pathway in a line, the pilgrims made their way past towering trees, several laden with worn Orthodox icons. They passed the graves of Russian priests who became stranded in Alaska after the 1917 Bolshevik revolution in Russia. The air is cool, still, and silent.

“It’s almost thundering quiet in there, and you can experience what Saint Herman lived in,” Panamarioff added. “You feel that there is something bigger than you.” 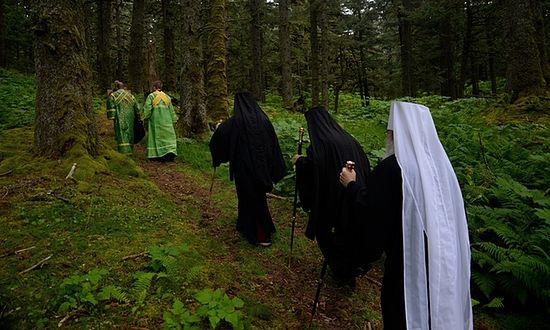 Walking along a moss-paved pathway in a line, the pilgrims made their way past towering trees. Photograph: Ryan Schuessler

It’s called Monk’s Lagoon – the spot on Spruce Island where Saint Herman of Alaska spent his final days before his death in 1836.

“We’ve been coming here long before he was a saint,” said Panamarioff, who is an Alaska native from the nearby village of Ouzinkie. “People from Ouzinkie came here – took care of the priests that lived down here in the summers.”

Russian fur traders first arrived in the Kodiak Archipelago in the mid-1700s and were quick to exploit and abuse the indigenous Alutiiqs. Russian Orthodox missionaries soon followed, and when Father Herman – who Alaska natives call “Apa Herman” – arrived, he became an advocate for the Alutiiq people, earning their trust and bringing villages into the Russian Orthodox church.

“There’s sort of a spiritual purity to the missionary work of the Orthodox throughout history, but particularly here in Alaska,” said Metropolitan Tikhon, the Archipshop of Washington and leader of the Orthodox church in America. “It’s a way of bringing the gospel of Jesus Christ to the people in a very personal way, and in a way that doesn’t destroy the integrity of their local culture and life.” 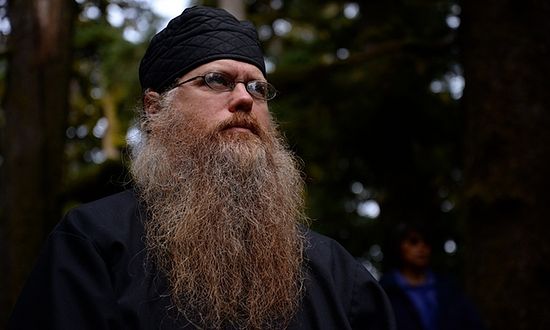 Alaska was part of the Russian empire until the United States bought the territory in 1867. Photograph: Ryan Schuessler

Like many Alaska Native communities, the majority of the Alutiiq people are still Russian Orthodox, and the church continues to play an important role in village life throughout the state. Alaska Natives from across the region are among those that make the journey to Spruce Island each year.

Alaska was part of the Russian empire until the United States bought the territory in 1867, and the 1971 Alaska Native Claims Settlement Act returned Spruce Island to the Alutiiq people of Ouzinkie. Today, the Orthodox diocese of Alaska is under the jurisdiction of the Orthodox church in America, not the Russian Orthodox church out of Moscow.

Since he became a canonized saint in 1970, Father Herman is drawing a more international crowd to Kodiak, many of whom come to take part in the Orthodox traditions preserved by the Alutiiq people. More recently, Russians are making the journey. 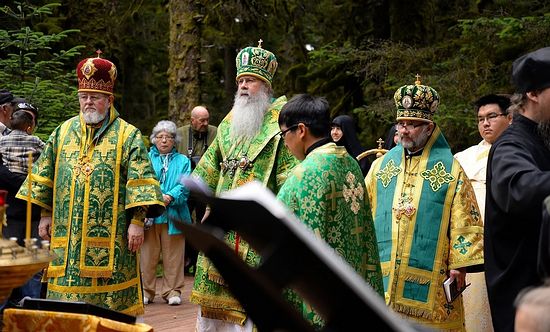 Daria Safronova-Simeonoff was one of them. She first made the pilgrimage to Kodiak five years ago, moved to the island shortly thereafter, and now teaches at the Russian Orthodox seminary in the fishing town of around 6,500 people.

“It’s getting more popular [among Russians],” Safronova-Simeonoff said. “When we have religious spiritual revival in Russia, many more pilgrims learn about [Father Herman], and they come here.”

“I myself grew up as an atheist, but you come here and see the Native people who still go to church, and there are villages that are still 100 percent Orthodox,” she said. “So, as I like to say, I learned to be Russian Orthodox from Native people. That is true.”

The journey from Russia is a long one – pilgrims often have to fly all the way around the world to get to Alaska. Politics haven’t stopped them, either, Safronova-Simeonoff said. This year, Russians and Ukrainians – even one from the war-town Donetsk region – made the journey.

“Alaska has an uninterrupted tradition in Orthodox Christianity,” Safronova-Simeonoff said. “What was lost in Russia was retained here.”

Orthodox Christians from Russia on pilgrimage to mark 40th anniversary of canonization of St. Herman of Alaska

Orthodox Christians from Russia on pilgrimage to mark 40th anniversary of canonization of St. Herman of Alaska A group of pilgrims from Russia led by Archbishop Justinian of Naro-Fominsk, administrator of the Patriarchal Parishes in the USA, and pilgrims from the USA led by the Primate of the Orthodox Church in America, His Beatitude Metropolitan Jonah came to Kodiak Island. 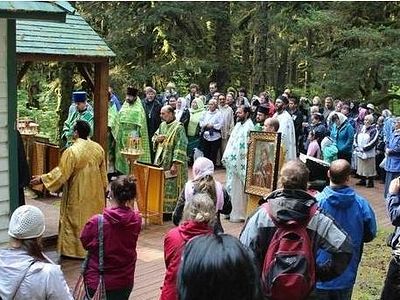 American Christians exalt roots Pilgrims from across the world traveled here Wednesday to celebrate the 42nd anniversary of the canonization of St. Herman of Alaska. 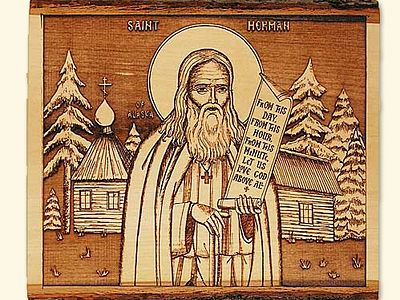 Address of the Great Council of Bishops of the Orthodox Church in America 11-13 March 1969, Concerning The Canonization of the Spiritual Father Herman of Alaska

Address of the Great Council of Bishops of the Orthodox Church in America 11-13 March 1969, Concerning The Canonization of the Spiritual Father Herman of Alaska "We believe that it was the will of God to reveal to us on this continent, and in this country, the Blessed Spiritual Father Herman as a sublime example of the Holy Life, for our spiritual benefit, inspiration, comfort and the confirmation of our Faith."
Комментарии