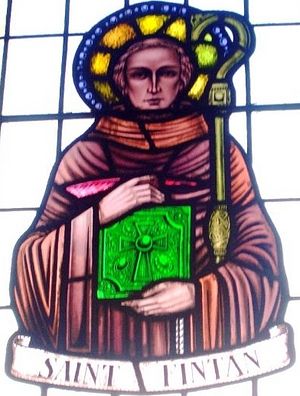 St. Fintan Munnu
St. Fintan Munnu (also Finian, Mund) was born in the second half of the sixth century in Ireland to the Ui Neil clan. His father was called Talchan and mother bore the name Feidelmia. According to one version of his life, as a very young man Fintan was a disciple of St. Columba in Iona and helped the latter in his mission in Scotland. But according to the most popular tradition, Fintan was trained in monastic life in his native Ireland: first under St. Comgall in Bangor, and then, for the whole of eighteen years he lived together with a famous wise abbot called Sinel at the monastery at Lough Erne in today’s County Fermanagh. Most probably the future saint lived for some time at Kilmore Monastery founded by St. Columba in Ireland before his move to Scotland. The young ascetic liked the rule of this monastery and decided to go to Iona in Scotland and to join the community of St. Columba there.

So, Fintan arrived on Iona in 597. But right after his arrival he learned that the great St. Columba had reposed shortly before. Fintan was met on Iona by the new abbot, St. Baithene, who read him aloud the will of St. Columba: “Baithene, remember my words. Straight after my repose a brother called Fintan, son of Talchan, who is now living in great piety and brilliantly versed in the Holy Scriptures, will come here from Ireland. He will ask you for permission to join our brethren, but it is against God’s will. For, the Lord has preordained that he become not a simple monk, but an abbot, a spiritual father and teacher of numerous monks. That is why you will not let him stay in our islands, but instruct him to return to his native Ireland with peace, so that he can found there a monastery in Leinster not far from the sea and labor for the salvation of many souls”. Hearing these words, Fintan was amazed at the great holiness of the venerable prophet Columba. He believed them without hesitation and, though he considered himself unworthy, at once sailed back to Ireland, obeying Columba’s last will. Thus Fintan returned to the emerald island and established there the Monastery of Taghmon (the original name: Tech Munnu) in Leinster province in the present-day County Wexford, becoming its first abbot.

The land for the foundation of this monastery were bestowed on him by the local pious and generous ruler (chief of the clan) called Dimma. Fintan predicted that the Lord would return Dimma a hundredfold for his good deed. Afterwards, Dimma’s son was educated at this very monastery of St. Fintan and became a bishop, while Dimma himself later joined the monastery where he became a clergyman. After his repose was buried in the monastery cemetery.

St. Fintan became famous as a very experienced, talented and wise abbot and mentor, a prominent preacher with a fine knowledge of theology. He often delivered inspiring and eloquent sermons and even gave lessons on secular sciences, such as mathematics. It was said that around 150 monks lived in Taghmon under St. Fintan (later their number reached 230). Even with the very strict discipline introduced by Fintan, life at the holy monastery flourished.

Fintan was a true ascetic and severely mortified his flesh. He is also famous for his close friendship with wild animals (for example, when he was a boy wild wolves served him, guarding his fathers’ sheep in place of sheepdogs). For many years he firmly defended the old Roman traditions of the Irish Church, such as the custom of calculating Easter and the Irish monastic tonsure, opposing the introduction of contemporary traditions. But several years before his repose the holy abbot heeded the voice of the Church and accepted the practices of the rest of the Church.

In his final years, St. Fintan suffered much from a tormenting skin disease (most likely leprosy), with great humility enduring the painful illness. The venerable man of God passed away in 634.

After his repose Fintan Munnu was venerated as a wonderworker. Angels appeared to him many times throughout his life and rescued him. He was noted for his clairvoyance and gifts of prophecy and healing (he even raised two people from the dead by his prayers). The saint’s name is mentioned in the lives of other prominent contemporary saints, such as Kenneth and Moluog. It was said that outstanding figures like St. Aidan of Ferns visited Fintan’s monastery. This is indicative of the popularity of St. Fintan, and of the love and respect he enjoyed among his fellow countrymen. 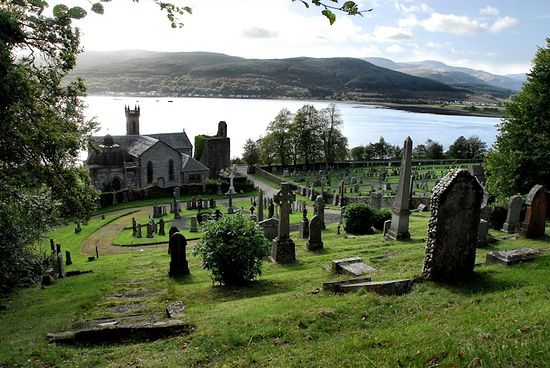 St. Fintan is venerated in both Ireland and Scotland where churches dedicated to him are to be found in various regions. In Scotland he is called St. Mund. Apart from his main monastery in Taghmon he founded other, lesser-known monasteries. Thus, the foundation of the monastery in Kilmun in the Cowal peninsula of Argyll and Bute in Scotland is attributed to him. Today the parish church of St. Munn (in honor of the saint) stands on the site of the original monastery. The present church was built in the nineteenth century, but the previous one of which some ruins still can be seen dates back to the twelfth century. A medieval tower of that church partly survives. This site was so highly esteemed that the neighboring sea loch (a small bay) was called “Holy Loch”, and it bears this name to this day. 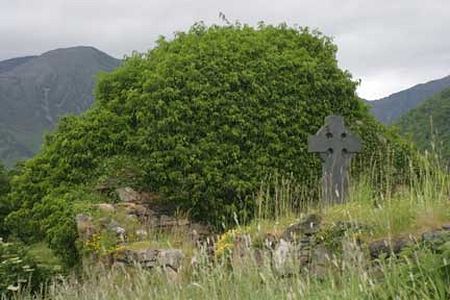 Ruins of the church built by St. Fintan on Eilean Munde, Scotland 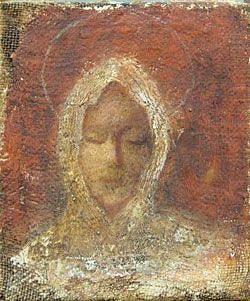 St. Ciara
St. Fintan’s pastoral crozier was preserved in Argyll for many years after his repose. A regular fair in honor of St. Fintan was held in Kilmun in medieval times. He may also have erected a chapel on the little island of Eilean Munde in Loch Leven in the Highlands when he was on his way back from Iona. This chapel was destroyed by the fire of 1495. In the following century it was rebuilt, but from the middle of the seventeenth century, services stopped. It was dedicated to St. Mund, and in the 1770s its walls were still intact. Today its remains still may be distinguished on this beautiful isle. In Ireland, St. Fintan together with his disciples also established the monastery of Tech-Telle in Westmeath but soon gave it to the great woman saint Ciara (also Cera; d. c. 680, feast: January 5/18) who transformed it into a convent. Later, in the fifteenth century, a Franciscan priory was founded in Cork and dedicated to St. Ciara—Kilcrea (“cell of Ciara”). This priory still stands on that site. 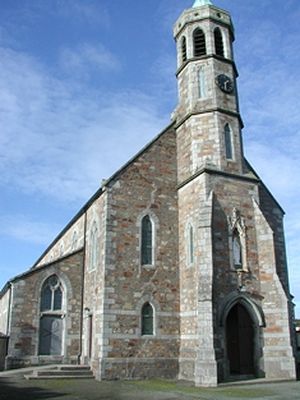 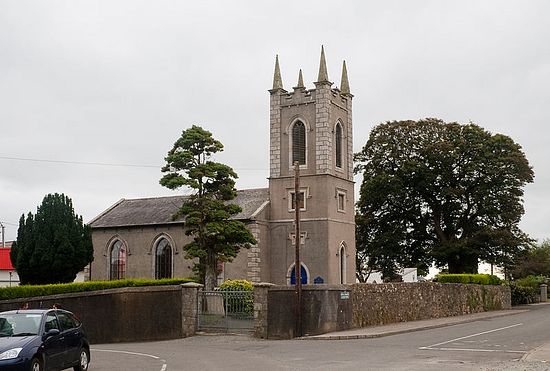 Today Taghmon is a village in Wexford; its name means “the house of St. Munnu”. The monastery founded by St. Fintan prospered here until the tenth century when it was ravaged by the Vikings in 917. Later the community was restored for a time. All that now remains of the ancient monastery is the partly surviving “high cross” standing in the churchyard of the local Anglican church. This cross is a gem and it probably dates back to the ninth century. This village has two churches in memory of its patron: the Roman Catholic church of St. Fintan was built in the second half of the nineteenth century, while the Anglican church (Church of Ireland) of St. Munn was built in 1819 on the site of an earlier church. Two holy wells associated with the saint can be found near the village. The first of them is the “Brownscastle St. Munn’s well” to which pilgrims are now returning after a period of neglect, and there are reports of cures from it and “St. Munn’s rock bed” nearby—especially cures of back diseases. The second well is called “Tobar Munna” but today it is dry most of the time. 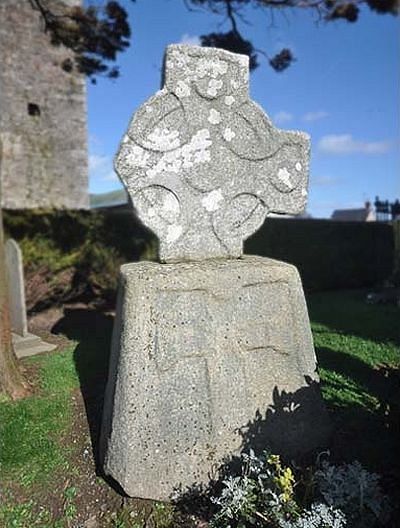 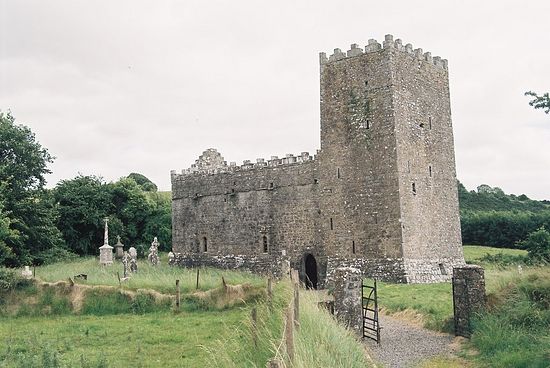 Significantly, there is another Irish village, formerly known as Taghmon, closely associated with our saint. Its present name is Crookedwood and it is located in county Westmeath. Tradition holds that St. Fintan founded a church or monastery there. The old fortified church (which to some looks like a castle) near the village is dedicated to St. Munna. This church built in the fourteenth century belongs now to the Church of Ireland.

A number of settlements, churches, holy wells and other objects across Wexford and even outside it bear the name of the saint marking his or his disciples’ activities. St. Fintan of Taghmon should not be confused with another saint of the same name—St. Fintan of Clonenagh. The name “Fintan” is still used in Ireland and other countries.

Holy Father Fintan Munnu, pray to God for us! 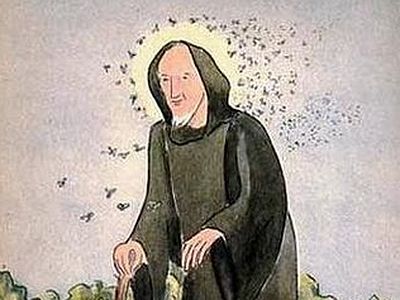 Holy Father Modomnoc of Ossory, Patron Saint of Bees Commemorated: February 13/26 Dmitry Lapa Before he had sailed three miles he suddenly saw a small black cloud that was swiftly approaching from the Welsh coast. Soon the cloud drew near and the holy man to his great astonishment realized that these were the bees from all the beehives of the Mynyw Monastery. The insects began impetuously and joyfully descending onto the boat of their master.
Комментарии