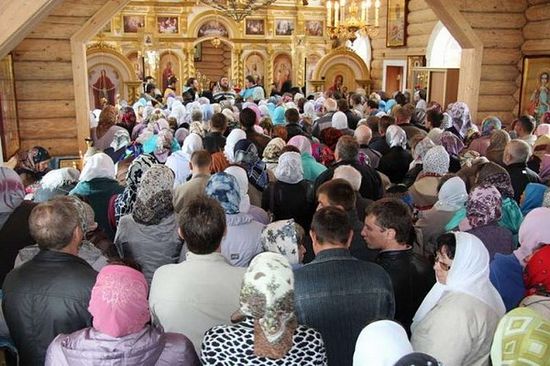 The Gospel lesson of Luke 8:41-56 has been a favorite of mine for the simple reason that I see it as presenting a “type” of the Church. Throughout the Gospels, wherever Jesus goes, a crowd is following. In that crowd are His disciples, but also curiosity seekers, sinners, Jewish religious leaders, unbelievers, publicans, Pharisees, lawyers, His enemies, people hoping to witness or experience a miracle, those seeking God’s kingdom, the desperate, and many others. We in the Church, in our parishes, should always be welcoming and hospitable to any such members of the crowd who show up at our parishes. We should treat them as Jesus did regardless of what reason that show up in our assemblies.

Many Gospel pericopes have this crowd, but Luke 8:41-56 always stands out in my mind as a good example of this crowd. 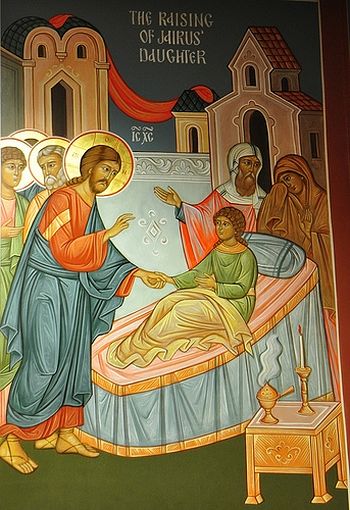 Just then there came a man named Jairus, a leader of the synagogue. He fell at Jesus’ feet and begged him to come to his house, for he had an only daughter, about twelve years old, who was dying. As he went, the crowds pressed in on him. Now there was a woman who had been suffering from hemorrhages for twelve years; and though she had spent all she had on physicians, no one could cure her. She came up behind him and touched the fringe of his clothes, and immediately her hemorrhage stopped. Then Jesus asked, “Who touched me?’’ When all denied it, Peter said, “Master, the crowds surround you and press in on you.” But Jesus said, “Someone touched me; for I noticed that power had gone out from me.” When the woman saw that she could not remain hidden, she came trembling; and falling down before him, she declared in the presence of all the people why she had touched him, and how she had been immediately healed. He said to her, “Daughter, your faith has made you well; go in peace.” While he was still speaking, someone came from the leader’s house to say, “Your daughter is dead; do not trouble the teacher any longer.” When Jesus heard this, he replied, “Do not fear. Only believe, and she will be saved.” When he came to the house, he did not allow anyone to enter with him, except Peter, John, and James, and the child’s father and mother. They were all weeping and wailing for her; but he said, “Do not weep; for she is not dead but sleeping.” And they laughed at him, knowing that she was dead. But he took her by the hand and called out, “Child, get up!” Her spirit returned, and she got up at once. Then he directed them to give her something to eat. Her parents were astounded; but he ordered them to tell no one what had happened.

The Gospel lesson starts off with the leader of the synagogue, Jairus by name, begging Jesus to come to his house and heal his 12 year old daughter. Frequently in other Gospel lessons, the synagogue leaders are among Christ’s most vocal critics. And their great complaint is that the disciples and Jesus do not adhere to every minute tenet of the Torah. Despite the criticisms of Christ by the synagogue leaders, here is one such leader following Christ and openly seeking His help and mercy.

Next in the Gospel lesson a woman, deemed unclean by Torah and synagogue leaders, secretly approaches Christ to touch the hem of His garment. She represents yet another group of people following Christ. She is not seeking to become a disciple. She is not looking for Orthodox doctrine, nor is she even concerned about following the Torah. She is in need of God’s mercy, and violates Torah in order to obtain it. Her deed and intention do not remain hidden. Jesus exposes what she has done. Now everyone in the crowd is aware that this woman, unclean by synagogue standards, is in the crowd, touching everyone. And Jesus does not rebuke her, but in fact blesses her! All she wanted was to touch the hem of His garment. This is what many want from Christ, and our parishes should be open to them. They are not seeking membership in the parish, they are not seeking leadership in the Church, not promising to become obedient to all religious rules and regulations. But, they are also following Christ and seeking something from Him. Jesus does not send them empty away. 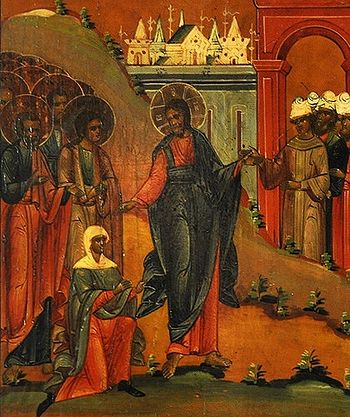 Now in the Gospel lesson, the synagogue leader faces a further dilemma. He has invited Jesus to come into his house. Jesus who not only was touched by an unclean woman, but who rewarded her disobedience to Torah and synagogue by healing her. Jesus does not even first demand that she promise to fulfill Torah. He simply grants her mercy and even wants the crowd to know what He did!

So does the leader really want this Jesus to come into his home and defile it with His own uncleaness? Jairus is even given a way out in the Gospel lesson. At the very moment that Jesus is speaking a blessing on this unclean woman, someone comes and tells Jairus that his daughter has already died, so no need for Jesus to come to his house. Jairus is given a polite way out – he can tell Jesus legitimately that Jesus shouldn’t bother to come to his house. Thus Jairsus can show that he keeps Torah and not let his house be defiled by Jesus. Jairus, however, does not demur and brings Jesus into his home. 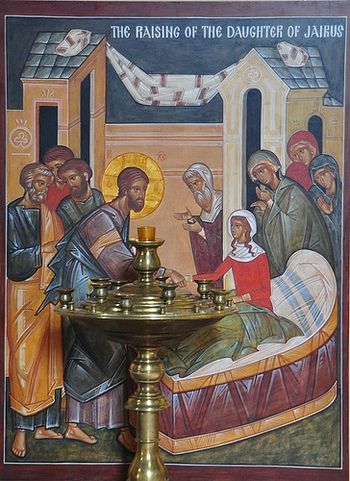 Jesus raises Jairsus’ daughter from the dead. Then, quite strangely, tells Jairus and his wife not to tell anyone what had happened. But a crowd at Jairus’s house already knew what had happened. They had laughed at Jesus when he said the girl was sleeping. That crowd already knew she was dead. They would have then seen her alive, and the parents, if they followed Jesus’ command would not tell the people what had happened. Maybe this was Christ’s mercy, for now Jairus would be spared having to admit that he sought out Jesus and then invited the unclean Jesus into his house to heal his daughter. Jairus could continue publicly to keep Torah, but in his heart he would know something greater than Torah had entered his life. 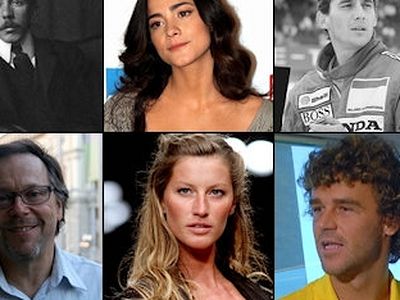 The Beauty of Diversity in Unity Fr. Stelyios Muksuris There is, however, another distance that faith in Christ helps us to minimize and eradicate completely — our distance from our true selves. Without a solid foundation in Christ, we maintain proximity to a “version” of ourselves that we are convinced by the dark powers is sufficient, perfect, and justifiably independent. We become not what God wants us to be, God-centered and God-focused, but what the demons desire us to be, self-centered and self-focused, like themselves. 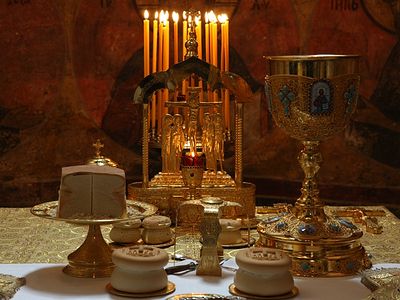 Consequences of the One Church – Unecumenism

Consequences of the One Church – Unecumenism Fr. Stephen Freeman Put yourself in the fourth century. There is only one Church, and that Church is One.

"It is our fault that there are people who do not know Christ" Metropolitan Athanasios of Limassol talks about end times, trust in God and the mission of Church Metropolitan Athanasios of Limasol Confession is the simplest way to learn what people think about and to understand their problems or concerns. I am very happy when people view their bishop as their father. I am happy when I know that people can come to my church and find me there to tell me about their problems.
Комментарии