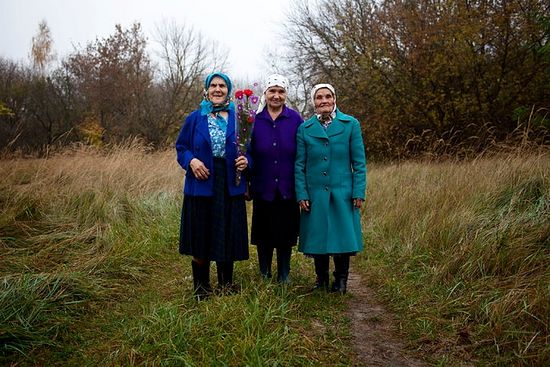 From left, Hanna Zavorotnya, Maria Zagorna and Maria Shovkuta are among the women who chose to return to the Chernobyl exclusion zone after the 1986 nuclear accident. Credit Yuli Solsken

As we walked among the empty houses of Zalesye, the last thing I expected to see was an inhabitant. But suddenly there she was. Striding from her cottage in heavy boots, a scarf tied on her head, Rosalia greeted us in Ukrainian and proudly showed us her potato patch.

The sole inhabitant of the village, she is one of about 100 older people, mostly women, still living in the Chernobyl exclusion zone — 1,000 square miles of Ukraine that were evacuated in 1986 after a catastrophic accident at a nuclear power plant.

In 2011, the area was officially opened to visitors, and last year, I joined a tour group for a two-day journey through the zone. In another village, our guide introduced us to Maria, who said she would be celebrating her 86th birthday that July. “Come visit me on the 16th,” she said with a toothless grin. “We are going to dance.”

Next month in Stockholm, the Nobel Prize in Literature will be awarded to Svetlana Alexievich, who is best known for “Voices From Chernobyl,” a moving oral history of the thousands of families displaced from their homes by the disaster. A new documentary, “The Babushkas of Chernobyl,” directed by Holly Morris and Anne Bogart, tells a different story — of the spirited women who insisted on going back. 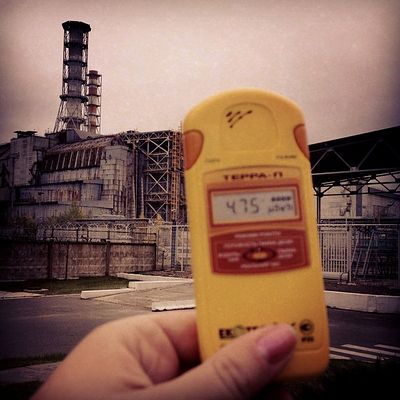 A dosimeter used to measure exposure to radiation at the site of reactor No. 4 at Chernobyl.CreditYuli Solsken

They eat vegetables grown in their gardens and berries and mushrooms picked in the woods.

“Starvation is what scares me, not radiation,” Hanna Zavorotnya, 83, tells the camera as she sits outside her house peeling mushrooms to sauté with onions. She draws water from her well as the chickens she keeps for eggs scratch about the yard.

“The Babushkas of Chernobyl” trailer.

Like many of the babushkas, she was an infant during Stalin’s famine and a schoolgirl during the Nazi march across Ukraine. They have outlived their husbands and, in some cases, endured thyroid cancer. Most of them eventually die from strokes and the usual complications of old age.

“The exclusion zone is not a prison,” Valentyna Ivanivna, 75, says in the film as she fishes in the Pripyat River, which flows past the old nuclear plant. She is an expert on the medicinal herbs her grandmother taught her to gather in the forest. Life here, she believes, is healthier than in the city.

“In Kiev, I’d have died long ago, five times over,” she says. “Every car releases the whole periodic table into the air, and you inhale that into your lungs.”

Later we see her at a medical center, sitting in the chair of a radiation spectrometer to have her level of cesium checked.

“You’re fine,” the lab technician assures her. He reminds her of what she already knows — that radiation is dangerous. Mushrooms, which funnel radionuclides from the soil, are especially suspect. But there are other considerations — “sociopsychological factors,” he calls them — that affect human health.

He tells of a study that found returnees — that is the official term — are outliving the evacuees. “Quite simply, people die from anguish,” he says.

As I watched the film, I thought of the estimated 1,600 people who have died from the strain of the evacuation that followed the Fukushima meltdown in 2011. Since I wrote about the aftermath a couple of months ago, the first case of cancer, in a worker on the cleanup crew, has been attributed to the accident. 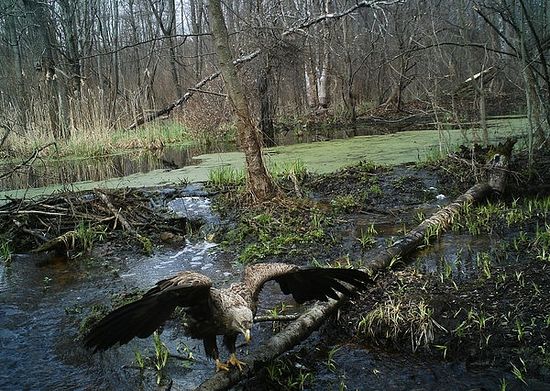 In the absence of humans from areas around Chernobyl, some species have thrived. Credit Sergiy Gaschak/Associated Press

There is no way to know whether the man’s leukemia was actually caused by the radiation. But in agreeing to award medical compensation, the Japanese government gave him the benefit of the doubt.

You don’t hear much about people willing to return to Fukushima, only accounts of the many who refuse to go back to areas now declared safe. With memories of Hiroshima and Nagasaki, they have their reasons to be leery. For the people of Chernobyl, the horrors of World War II were non-nuclear.

As resilient as the babushkas are the region’s wild animals. A study published last month in Current Biology found that elk, deer, wild boar and wolves are not just surviving but prospering.

As other research has suggested, the effect of the fallout has been more than offset by the departure of tens of thousands of farmers and hunters who once competed for the land’s resources. “When humans are removed, nature flourishes,” concluded a 2007 study of Chernobyl’s aftermath.

The accident, of course, has had many harmful effects. Early on, about 30 firefighters died from intense radiation, and 6,000 people exposed as children were later treated for thyroid cancer. The World Health Organization has predicted that the radiation might ultimately cause 4,000 premature cancer deaths. But no one really knows.

Epidemiological studies are inherently uncertain, a point that Mary Mycio, the author of “Wormwood Forest: A Natural History of Chernobyl,” makes in the documentary.

“All of the medical studies are flawed, and flawed in such a way that partisans on both sides of the nuclear debate can argue that the studies prove their point,” she says. “You don’t come here for clear answers.”

What she described is happening now in Fukushima. The scientific consensus is that the radiation will probably not cause any excess cases of childhood thyroid cancer, as it did in Chernobyl, according to a report released in August by the International Atomic Energy Agency. The exposures were much lower, and the Japanese government quickly took measures to discourage the consumption of milk and other foods that concentrate radioactive iodine.

But a paper last month in the journal Epidemiology claimed to have uncovered a thyroid cancer epidemic that had somehow gone unnoticed. The results have been seized on by antinuclear activists and disputed by skeptics who find flaws in the methodology. They make a persuasive case that the epidemic is an illusion.

Beneath the layers of spin and interpretation, there is presumably a fuzzy edged truth. When it comes to living on Earth, the babushkas of Chernobyl have it figured. Life, they know in their bones, is a matter of balancing risks. 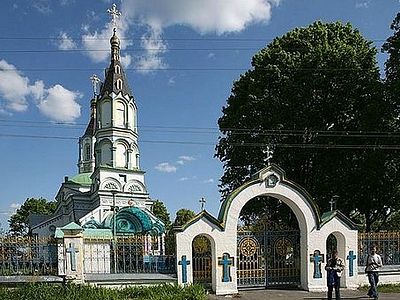 Divine Liturgy Celebrated in Chernobyl The accident at the Chernobyl nuclear plant happened on April 26, 1986, due to an explosion in the fourth power-generating unit. 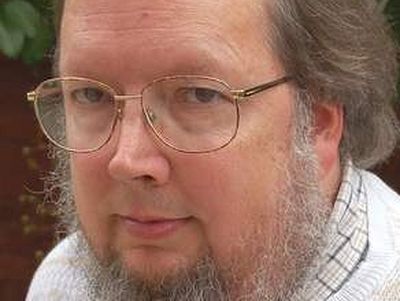 Chernobyl teaches us that we are not in command

Chernobyl teaches us that we are not in command The apocalyptic visions begin just inside the doors of the Ukrainian National Chernobyl Museum and many of them lead into the Book of Revelation. The final pages of Christian scripture are full of angels, trumpets, flames, thunder, lighting, earthquakes and catastrophes that shake heaven and earth. 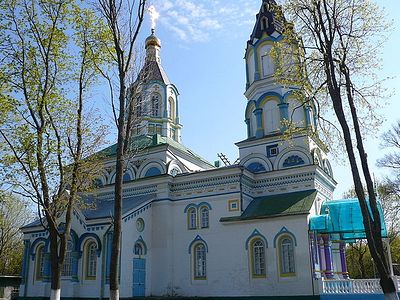