Palestinians have submitted an application to the UNESCO heritage committee asking that the Church of the Nativity in Bethlehem be granted World Heritage status. 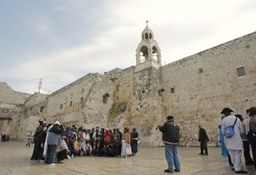 Church of the Nativity. Photo: AP Images / Nasser Shiyoukhi.
Tourists take photographs outside the Church of Nativity, traditionally believed by many Christians to be the birthplace of Jesus Christ, in the West Bank town of Bethlehem, Monday, Feb. 7, 2011. The Palestinian Authority said Monday it has asked the U.N.'s cultural agency in January to designate the church built at the traditional birth site of Jesus as the first world heritage site in the Palestinian territories.

The church was built 1,700 years ago on what is believed to be the site of Jesus’ birth. It sits today within the West Bank, under Israeli occupation.

It is the first time that a submission has been made to achieve World Heritage status for the church. UNESCO gives the distinguished title to sites of “outstanding universal value to humanity.”

Palestinian Authority Minister of Tourism and Antiquities, Khouloud Daibes, said, “This step is part and parcel of our plan to end the [Israeli] occupation and build the institutions of the state of Palestine.

The Church of the Holy Sepulchre in the Old City of Jerusalem has enjoyed UNESCO World Heritage Status for the last 30 years but the Church of the Nativity remains off the list because Palestine is not a recognized state.

Both churches are visited by millions of pilgrims each year, with the Church of the Nativity expected to welcome two million visitors through its doors in 2011 alone.

The Mayor of Bethlehem, Victor Baterseh,was quoted by Agence France-Presse as saying: "Where Jesus Christ was born is one of the most important cultural places in the world. It is from here that the message of peace and light was brought to the world by the Prince of Peace.”