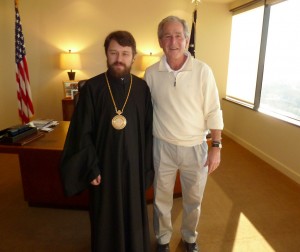 On February 10, 2011, the head of the Department of External Church Relations (DECR), Metropolitan Hilarion (Alfeyev) of Volokolamsk, arrived in Dallas, TX as part of his current visit to the U.S., reports the DECR communications service.

On the morning of February 11, Metropolitan Hilarion met with ex-President George Bush, Jr. The visit lasted about an hour. The two exchanged their views on a wide variety of issues. The Metropolitan shared his vision on inter-Christian dialogue, particularly emphasizing the need for cooperative work between representatives of various Christian confessions for preserving traditional moral values.

As a memorial token of the visit, the head of the DECR presented Mr. Bush with his book “Orthodoxy” in the English language, along with a commemorative painted box depicting the Moscow Kremlin.