Orthodox society begins fundraising for flood victims in the Philippines 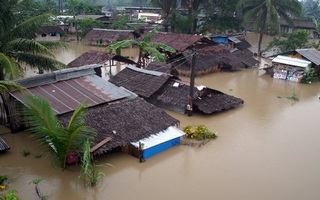 During floods, water mixes with mud and lifts up fallen trees and logs, which leaves almost no chance of survival by swimming, relates Fr. Cleopa, an Orthodox priest on Mindanao.
The Orthodox missionary society of St. Serapion of Kozheozersk has opened fundraising to support Orthodox Philippinos who have suffered from typhoon Washi, which struck the island of Mindanao in mid-December.

The floods and landslides caused by the Typhoon brought serious damage to Cagayan de Oro city, and surrounding villages on the island of Mindanao. Cities and whole villages were washed away by the floods. The floods, which came at night, caught people by surprise.

At least 1,500 people have been found dead, and countless are missing. According to the Philippines government’s statistics, around 338,000 people have suffered from typhoon Washi.

The society of St. Serapion of Kozheozersk has contacted an Orthodox priest on the island of Mindanao—Hieromonk Cleopa (Daklan). It became known that six of his parishioners were among the dead.

“Right now I am busy with helping the Orthodox families that have been hit, so that they can be freed of the psychological and emotional shock they’ve experienced. This is truly an enormous catastrophe, because those who have survived have lost everything; the flood left nothing. Everything was destroyed,” wrote Fr. Cleopa in his reply to inquiries. “By God’s mercy, even the modest means I had saved for missionary needs and travel was enough to obtain bottled drinking water and food—that is what is most needed by the victims… Now I am concerned with finding money to provide clothing—the second most needed thing for the Orthodox who have suffered from the disaster. As I have already said, they have nothing left. I hope in God’s help. Please, remember us in your prayers, because these are possibly the most difficult days for our suffering brothers and sisters. Here are the names of the Orthodox Christians who have died in the flood; please pray for them: Maria, Antonio, Jose, James, Dimitri, Elizabeth, Faith, Cristina, Fidelis, Agnes, Anna.”

Hieromonk Cleopa (Daklan) serves under the omophorion of the Patriarchate of Constantinople. Also in the Philippines are parishes of the Russian Orthodox Church Abroad and the Antiochian Orthodox Church. The St. Serapion society is still gathering information as to whether there are victims in those parishes, and will take them into consideration in the distribution of funds.

The Society of St. Serapion of Kozheozersk, founded by Fr. Daniel Sisoyev, is a missionary society dedicated to Orthodox mission around the world, particularly in countries that have either never been reached, or have been reached only recently.

Donations for the victims are currently being accepted through the Russian payment system Yandex Money. For information on donations from abroad, please contact the Society at: pravoslavmir@yandex.ru.