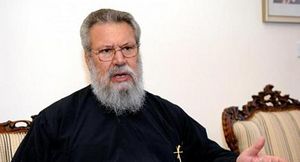 Cyprus Chrysostomos gave an exclusive interview on the London Greek Radio, saying that there are no developments on the Cyprus Issue and the contacts that have been made concerning this issue regard only two countries, Turkey and Cyprus.

According to Archbishop Chrysostomos, Turks want to have influence on the south part of the island, aiming at its turkification. “Thus, I hope that during the imminent presidential elections, people will vote for a leader who can bring about the right solution for the Cyprus Issue”, he said.

After a question concerning Greek-Israeli cooperation, Archbishop Chrysostomos answered that Hebrews enjoy the support of Greece and Cyprus and are the only ones who can protect the gas pipeline issue.

The presence Of Hebrews is a ‘godsend’ now that their country is surrounded by the Arabs, and Greece and Cyprus are the only nations that can help them, Archbishop Chrysostomos concluded.