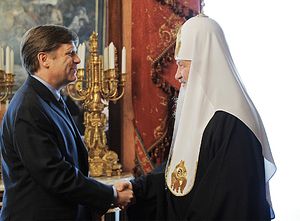 On 30 March 2012, His Holiness Patriarch Kirill of Moscow and All Russia met with H. E. Michael McFaul, the recently appointed Ambassador Extraordinary and Plenipotentiary of the USA to the Russian Federation. They were joined in the meeting, which took place at the Patriarch’s working residence in Chisty side-street, by Howard Solomon, deputy minister counsellor for political affairs of the US Embassy in Russia, and Jeremy Richart, political officer of the Embassy.

Relations between the people of Russia and America have a long history. For instance, the year of 2012 marks the 200th anniversary of Fort Ross, a Russian establishment on the west coast of North America “The Russian Church was the first to fulfill the Orthodox mission in the USA, – His Holiness Patriarch Kirill said while greeting the guests. – It started in Alaska and came to New York via California and Fort Ross.” The first Orthodox parishes in the USA were Russian parishes. Later, the autocephalous status was granted to the Orthodox Church in America. “We maintain contacts and good relations. We remember that our predecessors have founded this Church and were the first missionaries.”

Living in the United States are over three million people, who have come from Russia and the countries of the former USSR. Over 700 thousand say that Russian is their mother tongue. The Primate of the Russian Church thanked the American diplomat for an opportunity to publish literature for compatriots in their native language and organize communities within diaspora.

His Holiness expressed support to the conference being prepared by the Moscow Patriarchate’s Department for External Church Relations and the US Embassy. The participants will analyze the relationship among religious organizations, State, and secular society in Russian and in the USA. Ambassador McFaul confirmed interest in the conference.

“The task of the Church is to promote peace among people and contribute to the improvement of the situation and overcoming of confrontation,” His Holiness underscored. “I am deeply convinced that no “reset” is possible until people change their attitude to the others.”

Ambassador McFaul said that the US President sincerely believes in the development of relations between the US and Russian governments and between people of the two countries. He added that while speaking of “reset” in relations with Russia, we also mean your work as Patriarch, and emphasized great importance of the ministry of the Primate of the Russian Orthodox Church.