Is Mormonism Christian?: A Comparison of Mormonism and Historic Christianity 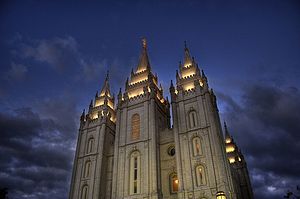 Mormon Temple
Is Mormonism Christian? This may seem like a puzzling question to many Mormons as well as to some Christians. Mormons will note that they include the Bible among the four books which they recognize as Scripture, and that belief in Jesus Christ is central to their faith, as evidenced by their official name, the Church of Jesus Christ of Latter-day Saints. Furthermore, many Christians have heard the Mormon Tabernacle Choir sing Christian hymns and are favorably impressed with the Mormon commitment to high moral standards and strong families. Doesn’t it follow that Mormonism is Christian?

To fairly and accurately resolve this question we need to carefully compare the basic doctrines of the Mormon religion with the basic doctrines of historic, biblical Christianity. To represent the Mormon position we have relied on the following well-known Mormon doctrinal books, the first three of which are published by the Mormon Church: Gospel Principles (1997), Achieving a Celestial Marriage (1976), and A Study of the Articles of Faith (1979) by Mormon Apostle James E. Talmage, as well as Doctrines of Salvation (3 vols.) by the tenth Mormon President and prophet Joseph Fielding Smith, Mormon Doctrine (2nd ed., 1979) by Mormon apostle Bruce R. McConkie and Teachings of the Prophet Joseph Smith.

1. Is There More Than One True God?

By contrast, the Mormon Church teaches that there are many Gods (Book of Abraham 4:3ff), and that we can become gods and goddesses in the celestial kingdom (Doctrine and Covenants 132:19-20; Gospel Principles, p. 245; Achieving a Celestial Marriage, p. 130). It also teaches that those who achieve godhood will have spirit children who will worship and pray to them, just as we worship and pray to God the Father (Gospel Principles, p. 302).

By contrast, the Mormon Church teaches that God the Father was once a man like us who progressed to become a God and has a body of flesh and bone (Doctrine and Covenants 130:22; "God himself was once as we are now, and is an exalted man, and sits enthroned in yonder heavens!" from Teachings of the Prophet Joseph Smith, pp. 345-347; Gospel Principles, p. 9; Articles of Faith, p. 430; Mormon Doctrine, p. 321). Indeed, the Mormon Church teaches that God himself has a father, and a grandfather, ad infinitum (Teachings of the Prophet Joseph Smith, p. 373; Mormon Doctrine, p. 577).

3. Are Jesus and Satan Spirit Brothers?

The Bible teaches and orthodox Christians through the ages have believed that Jesus is the unique Son of God; he has always existed as God, and is co-eternal and co-equal with the Father (John 1:1, 14; 10:30; 14:9; Colossians 2:9). While never less than God, at the appointed time He laid aside the glory He shared with the Father (John 17:4, 5; Philippians 2:6-11) and was made flesh for our salvation; His incarnation was accomplished through being conceived supernaturally by the Holy Spirit and born of a virgin (Matthew 1:18-23; Luke 1:34-35).

The Bible teaches and orthodox Christians through the ages have believed that Father, Son, and Holy Spirit or Holy Ghost are not separate Gods or separate beings, but are distinct Persons within the one Triune Godhead. Throughout the New Testament the Son and the Holy Spirit, as well as the Father are separately identified as and act as God (Son: Mark 2:5-12; John 20:28; Philippians 2:10,11; Holy Spirit: Acts 5:3,4; 2 Corinthians 3:17,18; 13:14); yet at the same time the Bible teaches that these three are only one God (see point 1).

By contrast, the Mormon Church teaches that Father, Son, and Holy Ghost are three separate Gods (Teachings of the Prophet Joseph Smith, p. 370; Mormon Doctrine, pp. 576-577), and that the Son and Holy Ghost are the literal offspring of Heavenly Father and a celestial wife (Joseph Fielding McConkie, Encyclopedia of Mormonism, vol. 2, p. 649).

5. Was The Sin Of Adam and Eve a Great Evil Or a Great Blessing?

The Bible teaches and orthodox Christians through the ages have believed that the disobedience of our first parents Adam and Eve was a great evil. Through their fall sin entered the world, bringing all human beings under condemnation and death. Thus we are born with a sinful nature, and will be judged for the sins we commit as individuals. (Ezekiel 18:1-20; Romans 5:12-21).

6. Can We Make Ourselves Worthy Before God?

The Bible teaches and orthodox Christians through the ages have believed that apart from the saving work of Jesus Christ on the cross we are spiritually "dead in trespasses and sins" (Ephesians 2:1,5) and are powerless to save ourselves. By grace alone, apart from self-righteous works, God forgives our sins and makes us worthy to live in His presence (Ephesians 2:8-9; Titus 3:5-6). Our part is only to cling to Christ in heartfelt faith. (However, it is certainly true that without the evidence of changed conduct, a person’s testimony of faith in Christ must be questioned; salvation by grace alone through faith, does not mean we can live as we please — Romans 6:1-4).

By contrast, the Mormon Church teaches that eternal life in the presence of God (which it terms "exaltation in the celestial kingdom") must be earned through obedience to all the commands of the Mormon Church, including exclusive Mormon temple rituals. Works are a requirement for salvation (entrance into the "celestial kingdom") — Gospel Principles, p. 303-304; Pearl of Great Price — Third Article of Faith; Mormon Doctrine, pp. 339, 671; Book of Mormon — 2 Nephi 25:23).

7. Does Christ's Atoning Death Benefit Those Who Reject Him?

The Bible teaches and orthodox Christians through the ages have believed that the purpose of the atoning work of Christ on the cross was to provide the complete solution for humankind’s sin problem. However, those who reject God’s grace in this life will have no part in this salvation but are under the judgment of God for eternity (John 3:36; Hebrews 9:27; 1 John 5:11-12).

By contrast, the Mormon Church teaches that the purpose of the atonement was to bring resurrection and immortality to all people, regardless of whether they receive Christ by faith. Christ’s atonement is only a partial basis for worthiness and eternal life, which also requires obedience to all the commands of the Mormon church, including exclusive Mormon temple rituals (Gospel Principles, pp. 74-75; Mormon Doctrine, p. 669).

8. Is The Bible The Unique and Final Word of God?

The Bible teaches and orthodox Christians through the ages have believed that the Bible is the unique, final and infallible Word of God (2 Timothy 3:16; Hebrews 1:1,2; 2 Peter 1:21) and that it will stand forever (1 Peter 1:23-25). God’s providential preservation of the text of the Bible was marvelously illustrated in the discovery of the Dead Sea Scrolls.

By contrast, the Mormon Church teaches that the Bible has been corrupted, is missing many "plain and precious parts" and does not contain the fullness of the Gospel (Book of Mormon — 1 Nephi 13:26-29; Doctrines of Salvation, vol. 3, pp. 190-191).

9. Did The Early Church Fall Into Total Apostasy?

The Bible teaches and orthodox Christians through the ages have believed that the true Church was divinely established by Jesus and could never and will never disappear from the earth (Matthew 16:18; John 15:16; 17:11). Christians acknowledge that there have been times of corruption and apostasy within the Church, but believe there has always been a remnant that held fast to the biblical essentials.

By contrast, the Mormon Church teaches that there was a great and total apostasy of the Church as established by Jesus Christ; this state of apostasy "still prevails except among those who have come to a knowledge of the restored gospel" of the Mormon Church (Gospel Principles, pp. 105-106; Mormon Doctrine, p. 44).

Conclusion: The above points in italics constitute the common gospel believed by all orthodox Christians through the ages regardless of denominational labels. On the other hand, some new religions such as Mormonism claim to be Christian, but accept as Scripture writings outside of the Bible, teach doctrines that contradict the Bible, and hold to beliefs completely foreign to the teachings of Jesus and His apostles.

Mormons share with orthodox Christians some important moral precepts from the Bible. However, the above points are examples of the many fundamental and irreconcilable differences between historic, biblical Christianity and Mormonism. While these differences do not keep us from being friendly with Mormons, we cannot consider them brothers and sisters in Christ. The Bible specifically warns of false prophets who will teach "another gospel" centered around "another Jesus," and witnessed to by "another spirit" (2 Corinthians 11:4,13-15; Galatians 1:6-9). Based on the evidence presented above, we believe Mormonism represents just such a counterfeit gospel.

It has been pointed out that if one claimed to be a Mormon but denied all the basic tenets of Mormonism — that Joseph Smith was a prophet of God, that the Book of Mormon is true and divinely inspired, that god was once a man who progressed to godhood through keeping the laws and ordinances of the Mormon Church, and that the Mormon Church was divinely established — the Mormon Church would reject such a person’s claim to being a Latter-day Saint. One cannot fairly call oneself a Mormon if one does not believe the fundamental doctrines taught by the Mormon Church. By the same token, if the Mormon Church does not hold to even the basic biblical truths believed by the greater Christian community down through the ages, how can Christians reasonably be expected to accept Mormonism as authentic Christianity?