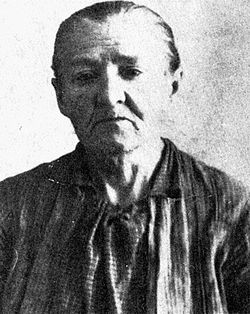 Blessed Zina[1] (Zinaida Grigorievna Matrokhina) was born in Veltluga in 1877 to a merchant family. When Zina's father died early in life, the family experienced hardship and material constraint for the first time. But these hardships were incomparable to what was to come later.

Immediately after the revolution, all possessions were seized and the family was reduced to poverty. Zinaida's mother accepted this cross with humility. Once a well-to-do merchant woman, she now walked in thin felt boots, almost barefoot, in worn-out threadbare clothing; but she was not dejected. Often in wintertime she would go to the pious Golubev family in Vetluga, and she would sit and sing psalms. Alexandra Golubev would look at her and think to herself, "We live and are dissatisfied with everything, but this person walks almost bare-foot in winter and sings psalms."

According to her mother's example and by God's Providence, the daughter Zinaida led a similar life. Muddy, in rags, with lice, she would say, "So Mamochka commanded me. my lice do not crawl onto anyone else."

People avoided receiving her into their homes because of her slovenliness, and those who did receive her were poor themselves. Such a one was Maria Alexandrovna, who lived in extreme poverty herself. Blessed Stepanida of Vetluga had told her that she would be covered with blood at her death. She was afraid to take in lodgers for this reason.

Fools-for-Christ live strangely and the motives of their behavior are incomprehensible to us. They live in poverty; they accept alms, but will not keep them for themselves. Zinaida, for example, brought all her alms to the savings bank. Render to Caesar the things that are Caesars (Mt. 22:21), she would say. "It came from the world and to the world it returns." There the money would be left. She would not even give any to her landlady, Maria Alexandrovna. The landlady complained to those who came as guests, "Please tell Zina to pay me more rent for her quarters. You see, I do not have anything with which to buy firewood. I have to gather deadwood from the forest myself."

Maria Alexandrovna would even burn with indignation, "And what is that to you, Zinushka? Is five rubles a lot of money for a whole year?"

But Zina would only say one thing, "I will pay more, Maria Alexandrovna. Five rubles per year."

At the end of her wandering life, the blessed one lost even this refuge. This came about in the following manner: once Maria went to the medical commission. She hoped that she would receive a pension for illness. But she did not take into consideration the fact that the doctors were atheists, and when she out of modesty refused to undress, they began to abuse her and finally drove her away. She became so upset that walking home and crossing the railroad tracks, she did not hear the train.

Thus the words of the blessed one were fulfilled: Maria Alexandrovna fell under the train and died from loss of blood.

For several months before her death, Zina walked around town and asked, "Let me stay with you."

But everyone knew that she didn't pay for her quarters and was slovenly, so they would not allow her to stay.

Thus she also died, without an earthly refuge. She caught a chill and after three days, on May 27/June 9, 1960, she reposed. She was buried in the new cemetery. Citizens of Vetluga honor her memory to this day.