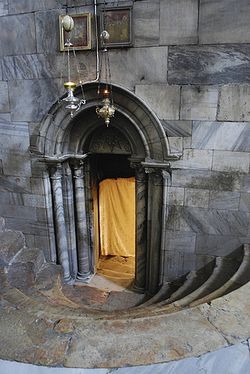 Entrance to the Grotto in the Church of the Nativity, Bethlehem.
UNESCO's World Heritage committee on Friday approved a Palestinian bid to place the Church of the Nativity in Bethlehem on its list of sites of World Heritage in Danger. It was a decision seen by some countries as a too politicized. Palestinian spokeswoman Hanan Ashrawi said the vote was an affirmation of Palestinian sovereignty over the site that marks the place where Christians believe Jesus was born, the Associated Press reports.

The 21-member committee, meeting in St. Petersburg, Russia, voted 13-6 to include the church and pilgrimage route, located in the Israeli-controlled West Bank, on its list of sites. There were two abstentions.

The drive to get the Nativity church quickly recognized as a World Heritage site was part of the Palestinians' bid to win international recognition since attempts to establish a Palestinian state through negotiations with Israel are frozen.

The United States was among nations opposed to the Palestinian proposal of an emergency candidacy for the iconic Christian site, shortcutting what is usually an 18-month-long process to apply for World Heritage recognition. Neither the United States nor Israel was on the committee. The U.S. ambassador to UNESCO, David Killion, said the United States is "profoundly disappointed."

The church — which drew some 2 million visitors last year and parts of which are 1,500 years old — stands above the grotto that Christians believe was the birthplace of Jesus. The Palestinian application asks for recognition as a site of "outstanding universal value" urgently in need of attention.

The application cited lack of regular restoration of the church due to the political situation since 1967 when Israel occupied the territories, and difficulties procuring equipment because of lack of free movement imposed by Israeli forces.

Among the more urgent needs is the leaky roof, something opponents affirm is not urgent enough to merit an expedited decision by UNESCO.

The three churches acting as custodians of the site had also been opposed. The Greek Orthodox, Armenian and Roman Catholic churches keep the site under a so-called Status Quo agreement dating to the Ottoman empire, and fear the Palestinian action will upset that delicate balance.