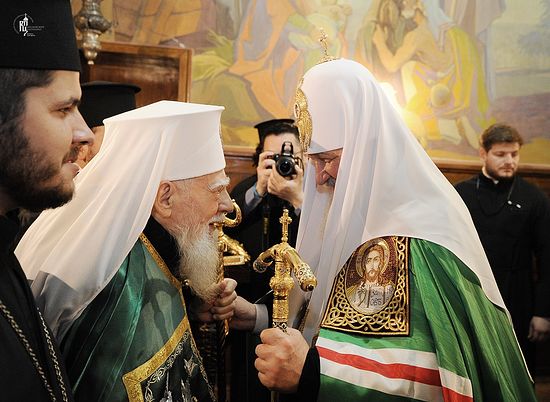 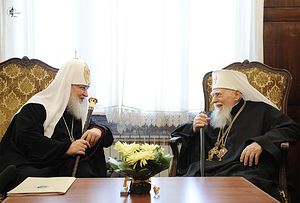 After the talk, His Holiness Patriarch Kirill of Moscow and All Russia was awarded the Order of the Holy and Right-Believing King Boris, the highest church award of the Bulgarian Orthodox Church. While presenting the ward, His Holiness Patriarch Maxim said: “We knew Your Holiness as a young clergyman of the Moscow Patriarchate and remember how You were growing in the blessed field of bilateral and inter-Orthodox relations being guided by experienced teachers and zealously carrying out all missions with which You were charged by Russian church authorities. We were privileged to meet You as archimandrite, bishop, archbishop and metropolitan… The news of Your election as Primate of the Russian Orthodox Church has filled my heart with great joy and hope for the future of our sister Churches and of Orthodoxy as a whole.

“We are confident that during Your time as the Primate, bilateral and inter-Orthodox relations will become even stronger, and our efforts directed to the convocation of the Holy and Great Council of the Orthodox Church will be intensified.

His Holiness Maxim added that we can state with joy in the beginning of the third millennium that our fraternal relations are firmly founded on the living behests of St. Cyprian of Moscow and all renowned Bulgarian and Russian bishops. We fulfill their precepts in our life and work so that love and mutual trust between us may grow to the glory of God and for the good of His Church, for the good of Holy Orthodoxy.

The Primate of the Russian Orthodox Church replied:

“I consider it a great honour to receive the highest award of the Bulgarian Orthodox Church – the Order of King Boris, Equal-to-the-Apostles. The award of a Church to the Primate of another is a sign of our unity in Christ. This award testifies to the close spiritual ties between our Churches. 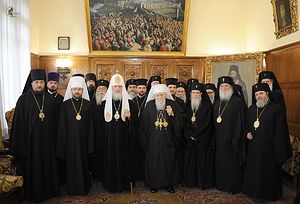 “Historical destines of the Russian and Bulgarian Churches are also very close. People of Bulgaria and Kievan Russia were baptized by the will and efforts of their wise rulers, whose hearts were illumined by the light of Christ’s faith. They were the holy King Boris and the holy Prince Vladimir… How many monks, priests and teachers came from Bulgaria to Kievan Russia! These righteous people continued the mission of Ss Cyril and Methodius, Equal-to-the-Apostles in the Russian land, and we keep grateful memory of them.

“History is replete with many bright testimonies of our spiritual affinity. For instance, St. Cyprian, a disciple of the renowned Patriarch Euphimius of Tǎrnovo, became Metropolitan of Moscow and, together with St. Sergius of Radonezh and other Russian zealots had done a great deal for making Orthodoxy in Russia stronger, defending it from the enemies.

“Contemporary society is in acute need of preserving historical memory about Christian roots of European civilization. Our sister Churches hold great responsibility for keeping their people from temptations of the modern world and for retaining unity firmly based on their common faith.

“I assure You that we are willing to work together with the Holy Bulgarian Church and with other Local Orthodox Churches for the sake of consolidating the God-commanded unity of Orthodox Christians and for expanding our bilateral cooperation.

“Your beloved Holiness! Once again I thank You for warm welcome and for this high award.

“May the Lord, through the prayers of the Holy and Right-Believing King Boris of Bulgaria, grant You peace and spiritual and physical strength! May He secure the Holy Bulgarian Church and consolidate the fraternal ties between our Churches and nations. Christ is Risen!”

The Primate of the Russian Church presented a traditional Easter egg to His Holiness Patriarch Maxim of Bulgaria and left a comment in the Book of Honoured Guests.