An entire Siberian region is blessed with holy water 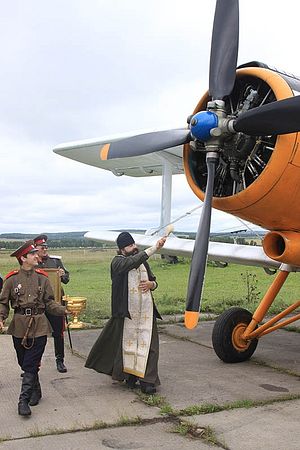 The entire Mansk district territory was consecrated with sprinkling of holy water.

The Rector of the Church of the Holy Great Martyr Paraskeva of Shali village, Archpriest George Mitin, together with the Rector of the Church of the Entrance of the Theokotos in the Temple in Berezovka, Priest Andrei Dorogov, served a moleben with an akathist to the Mother of God and to St. Luke (Vojno-Yasenetsky) before Her Icon of Kazan and the Icon of St. Luke with the relics of the saint, which was brought from the St. John the Baptist Church in Krasnoyarsk. This moleben and akathist were served on an An-2 propeller plane that flew over the territory of Mansk district.

The Cossack ataman of Mansk village, Victor Krainik, and Cossacks of the Mansk EVKO village also prayed at the service.

During the service the priests sprinkled holy water on the territory of the district. At the end of the flight the plane was consecrated as well, reports the press center of the Krasnoyarsk diocese.