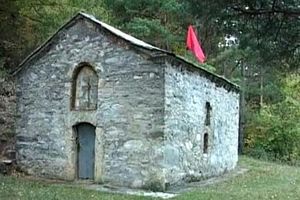 Photo: website of the Raska-Prizen Kosovo Metohija diocese.
Unknown individuals displayed the Albanian flag on the Serbian church in the Kosovo village of Brod near Strpce.

According to the local priest Zivojin Kojic, this is not the first such incident.

Kojic said that an Albanian flag was displayed at the self-same spot on March 17, 2009, and the incident has now happened again.

According to the report of television TV Herc from Strpce, Kojic underscored that unknown individuals broke down the tap built by the local population in front of the church a month ago. 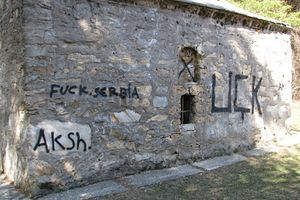 Photo: website of the Raska-Prizen Kosovo Metohija diocese.
Kojic noted that priests and local citizens pay regular visits to the church and performing repairs, but new damage is always inflicted upon the church after their departure.

Television Herc told the Kosovo police that the flag has been removed and that an investigation was launched immediately.

The village of Brod is surrounded by Serb and Albanian villages in the municipality of Strpce.