LifeSiteNews reporter Jeanne Smits directly witnessed the events that took place during this extraodinary event. She confirms the enormous numbers claimed by organizers and reports on many aspects either ignored or distorted by French and other media. This LifeSiteNews exclusive reports on what really happened during the demonstrations, including the totally uncalled for police tear gassing of some of her peaceful and prayerful friends and relatives. 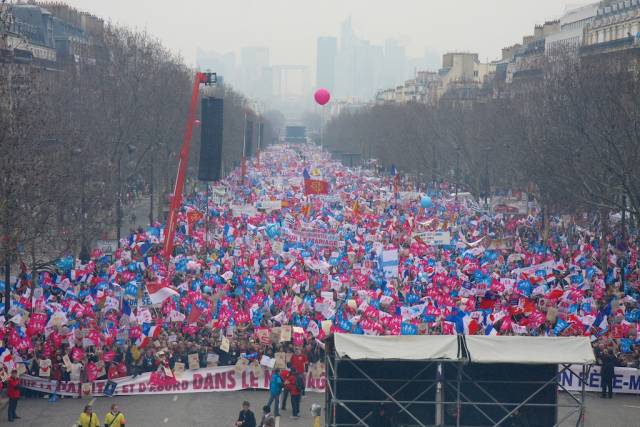 According to organizers, nearly one and a half million people joined the third demonstration in five months against the legalization of same-sex “marriage” by the French government in Paris, on Sunday.

Meanwhile, large numbers of demonstrators who were unable to join the main venue – which had filled up by 3 p.m. – or who headed straight to the largest and most prestigious Parisian thoroughfare, the Champs-Elysées, were sprayed with tear-gas and beaten as they neared the presidential palace. Victims included children as young as 6 years old, elderly gentlemen, women of all ages, middle-aged priests and monks, and even a baby aged 10 months. 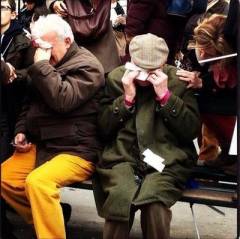 Tear gassed
One boy, aged 14, named Lancelot, needed respiratory assistance for half an hour; another youth, Léonard, 17, was gassed and subsequently seized by riot police who threw him down the stairs at the entrance of a nearby subway station. Christine Boutin, leader of the mainstream Parti chrétien démocrate (Christian democratic Party), was also among the victims: she passed out after having been sprayed with tear-gas and lay unconscious on the street for several minutes.

Videos also show a woman demonstrator who was apparently deliberately knocked over by a police van being attended to by volunteer first-aid workers of the Order of Malta. Another young man, Tristan, told LifeSiteNews.com that he was gassed with a group of friends after sitting down in the street at the request of the armed forces.

The French media played down the police violence: all major radio, tv and other news sources spoke of “attacks” by violent young demonstrators against the police and armed forces, while the minister of the Interior, Manuel Valls, publicly congratulated law enforcement officers for their “professionalism and cool-headedness.” However, dozens of videos posted on the Internet as well as eye-witness reports received from personal acquaintances of this author certify the opposite: unarmed and pacific, the overwhelming majority of the demonstrators assaulted by the armed forces did no more than vociferate their disapproval of the draft law, if that: most of them were laughing and singing as they strolled down the “most beautiful avenue in the world” – as the French believe – and were suddenly attacked by the riot police. 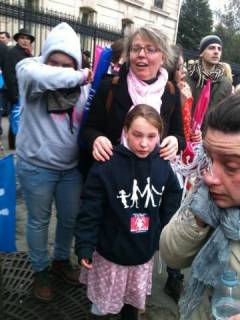 Tear gassed/Jeanne Smits/LifeSiteNews
Contrary to recent public demonstrations involving youths from the suburbs, no damage was caused and the young people and families involved were unarmed. No stones or Molotov cocktails were thrown, and there were virtually no attacks against the police who on several occasions let people through to the Champs-Elysées without offering much resistance.

Why did all these thousands of people – up to 40,000, according to the numbers quoted by the organizers of the “Manif pour tous’” (“Demonstration for all”) – decide to defy police orders not to march on the Champs-Elysées as had originally been planned? The ban had been made official for five days and had been confirmed by an emergency ruling on Wednesday afternoon. Hoqwcwe, the definitive itinerary and access points to the demonstration were only published by the “Manif pour tous” on the weekend. Frigide Barjot, the demonstration’s figurehead had previously announced that even if access to the Champs-Elysées were to be forbidden the March would go there all the same and plant tents to occupy the thoroughfare until some assurance would be given that the draft law would not be voted and enforced. She later backed down from this statement.

The symbolism of the Champs-Elysées is very important to the French. Military parades are held there on the 14th of July; it is where the Liberation parade took place on August 26th, 1944; soccer fans rallied there in their hundreds of thousands when France won the World Cup in 1998 and compact crowds gather every 31st December to see in the New Year. Political rallies were also held there, notably when hundreds of thousands of French demonstrated their support to general De Gaulle in the wake of the May-68 revolution. 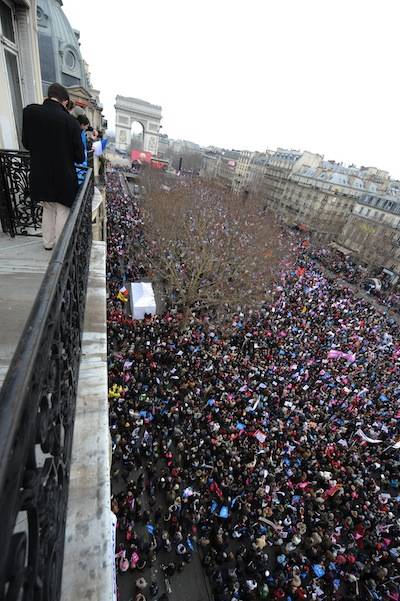 Photo from balcony from which LSN reporter Jeanne Smits observed the march/Jeanne Smits/LifeSiteNews
Even if the anti-gay “marriage” mobilization has been uniformly peaceful since the demonstrations began on November 17th, the powers that be are getting noticeably nervous about public opposition and the Champs-Elysées are way too close to the presidential palace (called the Elysée) for comfort. François Hollande, increasingly unpopular because of his handling of the economic crisis – latest opinion polls give him a meager 36% of popular approval – can certainly do without a major public hostile manifestation. Especially when his socialist predecessor François Mitterrand is known to have remarked, back in 1984: “When over one million people take to the streets, the government totters on its base.”

This may be the reason for police counts of demonstrators on Sunday afternoon. A few days ahead of the March, the Parisian police announced they were expecting some “100,000” participants, although the number of special trains and buses coming in from the French provinces was larger than two months ago. On January 13th the police had officially announced 340,000 participants as opposed to the million plus counted by the “Manif pour tous”.

This time round it had to be less. Official sources stopped their count at 300,000. They did so despite the fact that it had been given out beforehand that if the wide avenue behind the Arc de Triomphe where the demonstration was parked for five hours filled up – it can contain 1.2 million people – an additional avenue would be opened to accommodate the demonstrations. This took place at 3 p.m. An additional avenue was opened soon after, but despite this the crowds were so compact that many people literally spilled out onto the “place de l’Etoile” which separates the Champs from the Avenue de la Grande-Armée where the giant podium of the March was raised. This author witnessed part of the demonstration head-on from the balcony of a 6th floor apartment and can testify to the fact that the closely-knit, static crowd reached all the way to the end of the avenues between the Arc de Triomphe and the river Seine: some 6 kilometers.

This makes the “Manif pour tous” one of the most important demonstrations by far in the last thirty years. And it took many by surprise: most forecasters were expecting a lower turnout than two months ago, given the cost and bother of coming to Paris from the far away provinces, the more so because many large families came complete with all their children. Added to this is the fact that the demonstration is not claiming rights, benefits or public money. The French are voicing their opposition to same-sex “marriage” and “procreative rights” for homosexual couples as a matter of principle, in order to defend the community as a whole, the rights of children and the future of society itself.

These points were made by the many orators on the podium. Frigide Barjot has taken pains to keep politics and religion out of the “Manif pour tous”. However a number of representatives of the UMP, ex-president Sarkozy’s party, were allowed to speak. They are mostly in favor of legal civil unions as an alternative to same-sex “marriage” and over the years their party has promoted homosexual rights and criminalization of “homophobic hate-speech”. Left-wing politicians opposing gay “marriage” were also welcome, including a Trotskyite activist. Robert Lopez, the American professor who has publicly told of the problems he experienced as the child of a lesbian mother, told his story to enthusiastic applause. Gay men opposing same-sex “marriage” are among the organizers of the event. Adopted children witnessed to the importance of having a father and a mother to raise them, while adoptive parents told the crowd of the difficulties couples will experience when foreign countries refuse to let children in need of parents to travel to France if homosexuals are allowed to adopt here. 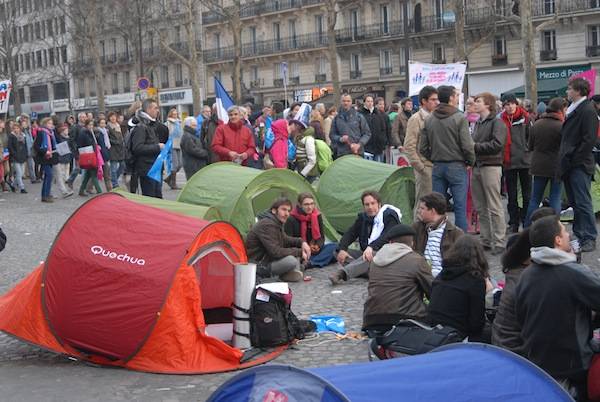 Jeanne Smits/LifeSiteNews
Jewish and protestant representatives were allowed to speak, as was a member of the Muslim brotherhood.

No Catholic bishop was invited to speak even though the vast majority of participants identify with Catholicism, sociologically at least, and it is an open secret that Sunday’s turnout was largely due to the Catholic hierarchy’s support.

Meanwhile, language that opponents to gay “marriage” and civil recognition of homosexual couples are finding increasingly difficult to stomach – calls from Frigide Barjot to applaud “the homosexuals” met with polite indifference – a certain ambiguity as regards the objectives of the march, and the sentiment that the advantage of previous demonstrations has not been pressed, all contributed to the nervousness of the crowds. Slogans like “Hollande resign” spontaneously arose while the organizers are still asking “Monsieur le Président” for a “dialogue” or a “referendum” about the draft law. Frigide Barjot’s main request was to obtain an interview with François Hollande today. 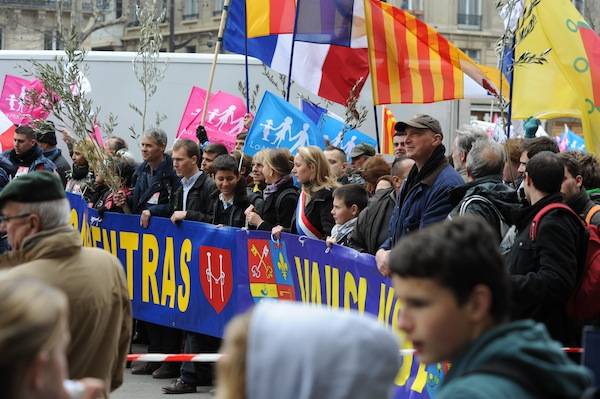 Jean Smits/LifeSiteNews
She also called the victims of Sunday’s police brutality “rioters” and “extremists,” implicitly justifying the use of teargas and violence against the crowds.

A spokesman for the government indicated early on Monday morning that the draft law will move ahead as planned. After a first reading at the National Assembly, it is scheduled to be discussed by the Senate in the beginning of April; second readings are expected and will take place if the Senate does not vote the text in identical terms.

Meanwhile, the socialist government is preparing other attacks on the family and the right to life. Embryo research is about to be voted into law: a whirlwind debate is expected at the National Assembly on Thursday. Child benefits are set to be cut for higher-income families. And as of Easter Sunday, abortion and contraception for under-age girls will be entirely funded by public money, making them 100% free.