Copts "thanking" Obama for the events in Egypt 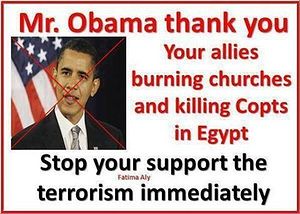 "At least 60 Churches have been destroyed in Egypt! Thank you, mister Obama! Your allies are destroying churches and killing Copts. Stop supporting terrorism immediately!" A banner with these words has appeared in Coptic social networks on the Internet. "Hey! And what about Syria?" is written in the comments.

It is thought that Copts have supported the opponents of the deposed president Morsi that's why they became subject of an unprecedented attack from the Muslim Brotherhood that has already been characterized as "evil day in the history of the Coptic Church", when several dozen churches, monasteries, schools, houses, and shops belonging to Christians were destroyed, set on fire and attacked in a single day.

According to AFP, "the Coptic Church together with Patriarch Tawadros II, who appears with the Commander-in-Chief of the Egyptian Armed Forces Abdel Fattah El-Sisi (minister of defense in the government of Morsi), has supported deposition of Morsi, because it was Abdel-Fattah El-Sisi who announced the military takeover," reports an observer of National Review Onlinе. "However, the (the Coptic Patriarch) was not alone; General Sisi gathered a considerable number of Muslim leaders around him, including (the president of Al-Azhar university in Egypt) Sheikh Ahmad Muhammad Al Tayeb and leaders of the Al-Noub Salafi party. 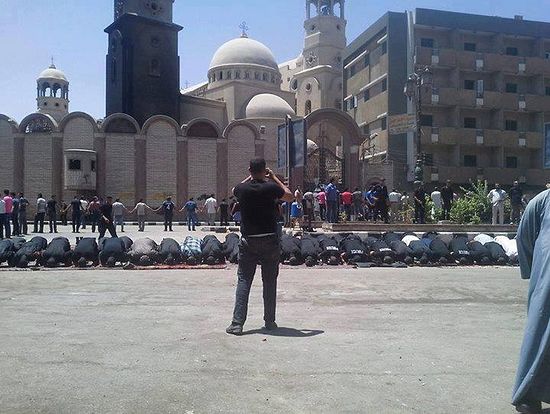 Morsi was deposed by the military, and not by Copts.

"The Muslim Brotherhood is not ‘retaliating’ against Christians", reports National Review Onlinе, “they are persecuting them, as is happening today in other countries with a radical Muslim majority".

Meanwhile, many are speaking today about the USA’s support for the Muslim Brotherhood.

It is known that in July, the USA "demanded that the Egyptian administration cease ‘groundless’ arrests of members of the Muslim Brotherhood movement immediately, stating the inadmissibility of persecution of any political organizations. "The president of the USA, Barack Obama, was concerned about the decision of Egypt to issue an arrest warrant for Muhammad Badi, the spiritual leader of the Muslim Brotherhood islamist movement to which the deposed president Morsi belongs, as well as nine other high-ranking functionaries of the party. They were arraigned in charges of fomenting violence in the country," reported BBC.

Now deputy spokesperson of the State Department Marie Harf has stated that the Egyptian authorities must stop dispersing demonstrations by the Muslim Brotherhood immediately, because freedom of demonstration is "an essential part of the democratic process in the country".