Saint Basil Ratishvili, one of the most prominent figures of the 13th-century Church, was the uncle of Catholicos Ekvtime III. He labored with the other Georgian fathers at the Iveron Monastery on Mt. Athos. Endowed with the gift of prophecy, St. Basil beheld a vision in which the Most Holy Theotokos called upon him to censure King Demetre’s impious rule.[1]

Having arrived in Georgia and been brought before the king, the God-fearing father denounced the sovereign’s uncrowned marriage [i.e., a conjugal union without the blessing of the Church]. He promised the king that if he abandoned his present way of life, he would find great happiness and success. St. Basil also condemned the ungodly ways of Georgia’s apostate feudal lords.

But the king and his court disregarded the virtuous elder’s admonitions, and in response St. Basil prophesied: “A vicious enemy will kill you, and your kingdom will remain without refuge. Your children will be scattered, your kingdom conquered, and all your wealth seized.

Know that, according to the will of the Most Holy Theotokos, everything I have told you will come to pass unless you repent and turn from this way of life. Now I will depart from you in peace.”

St. Basil returned to Mt. Athos and peacefully reposed at the Iveron Monastery.

His vision was fulfilled.

We venerate and praise with psalms thee, who didst laud the Holy Trinity, emulate the angels, and art enthroned in the heavenly kingdom. O Holy Father Basil, protector of all those who glorify thee, we praise and celebrate thy holy memory!

[1]This is actually St. Demetre the Devoted, who in his youth lived profligately but later laid down his life for his nation. 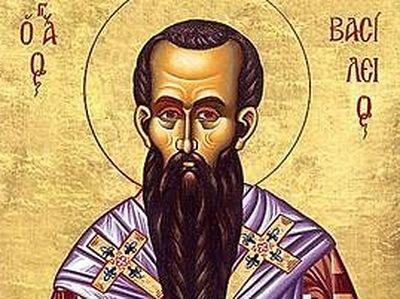 St. Basil the Great Celebrated January 1st (January 14th) In many Greek homes, a special cake is baked on the eve of St. Basil's Day (January 1st) with a gold or silver coin hidden inside. In the evening, just before midnight strikes and the new [calendar] year begins, all the lights are turned off for a minute to signify the dawning of a New Year. The family gaily exchanges wishes for "A Happy New Year!" and the cake is cut: one slice for St. Basil, one for each family member, one for each of the pets, and then the largest slice of all is cut for the poor people of the world. In one of these slices is hidden the coin, which brings blessings to its recipient throughout the year. 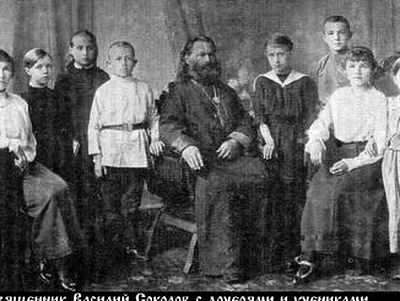 Hieromartyr Basil Sokolov. Part 1. "Her Prayer Was Granted!" Commemorated May 13/26 Igumen Damascene (Orlovsky) Fr. Basil recognized that life cannot go so smoothly. This is not natural, he thought. It is written: In the world ye shall have tribulations, and of course it was not said in vain. One cannot avoid tribulations, just as a calm sea cannot escape storms. A storm is dangerous and terrifying after a long, pleasant calm. So are tribulations difficult for those who are not accustomed to them, especially after a long, unruffled, happy life. "Would that the Lord would send us a cross to try us," Batiushka secretly prayed, "not too heavy, but just so that we would not be forgetful of man's earthly lot.