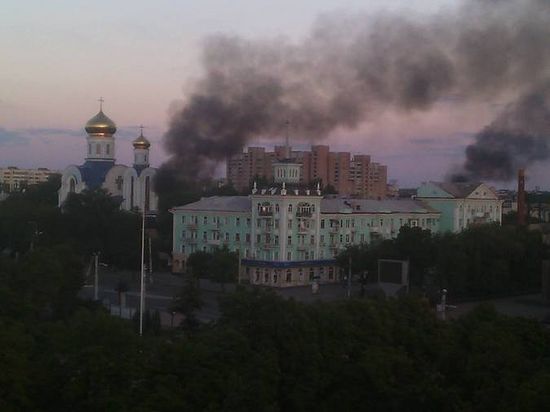 Five Lugansk residents fell victim to the artillery shelling of the city center that occurred in the evening of August 20. Two of them were killed, reports Sedmitza.ru with the reference to the Regnum news agency.

As the press service of the (still unrecognized) Lugansk People’s Republic government reported to a spokesperson of the Regnum news agency, about 20 artillery shells had been fired through the city center. As before, the Ukrainian artillery struck exclusively civilian targets, hitting residential buildings, a car park, and the refectory of the Church of the Icon of the Mother of God “Of Tender Feeling”.

“Only by a miracle did the shells not hit the propane tanks that are kept near the refectory,” a source in Lugansk commented on the situation.

This church, where the Wonder-Working Port Arthur Icon of the Mother of God donated from Russia is kept, was already a target of bombardment by the Ukrainian army on August 6.

“You can’t hold back the tears as you look at it… Glory to God that nobody is injured!!! And they… have bombed out our hearts. It is very painful…,” this comment, one of the last ones, was left on the church’s page of the “VKontakte” (“VK”) social network soon after the first shelling.

Church of St. Sergius of Radonezh Damaged By Shelling on Its Feast Day