A Man Born Blind, Jonah, Job and A Believer

And his disciples asked Jesus, “Rabbi, who sinned, this man or his parents, that he was born blind?”  (John 9:2) 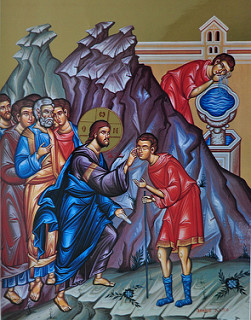 The question the disciples ask the Lord Jesus in John 9 has taken on new and personal meaning with me. When some hear that I have been diagnosed with Stage 3 lung cancer, they often ask two questions:

Were you a smoker?

Is there a history of lung cancer in your family?

The questions are logical—people trying to make sense of the lung cancer diagnosis. Obviously if you were a smoker (you sinned), the lung cancer is the consequence of your behavior. Or if your family has a history of lung cancer, then it is your ancestors who passed the gene along to you (parent’s ‘sin’). What the logic does of course is put the person at ease, for if there is a clear cause and effect of sin to disease, my interlocutor can feel safe that the world is reasonable and logical. People get lung cancer because they smoked/sinned or the inherited the sin from their parents.

Such logic helps people get through the day and helps them avoid thinking about their own mortality, but we all know the world is a bit more unpredictable than our reason allows. The Holy Prophet Job got his story in our Scriptures. Retributive justice is not always at work, or the only force at work, or may not even remotely be the cause of the effect.

My history is I was not a tobacco smoker, and there is no known history of lung cancer. There is no doubt some cause for the lung cancer, but as the doctors have told me, we will never know what caused my lung cancer to begin. 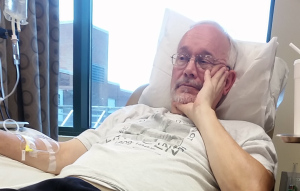 Believers in the ancient world did not have an explanatory category of “natural causes.” For me in the scientific world, I can see there are natural disasters whose causes can be explained by natural forces. The right collection of natural forces will produce a tornado or an earthquake or an epidemic. I don’t have to think that every event is caused by an angry God. The ancients, lacking a “natural disaster” category tended to interpret all things as acts of God. What was not ever certain was exactly what caused God to act in a particularly destructive way. Many theories were proposed: sin, icons, lack of icons, unwillingness of people to change, people too willing to change. The Prophet Jonah, one can recall, was distraught that God didn’t destroy the city of Nineveh. He proclaimed the city would be destroyed, hoped it would happen, and then was disappointed that God didn’t do it. Jonah laments what he knows about God:I knew that you are a gracious God and merciful, slow to anger, and abounding in steadfast love, and ready to relent from punishing (Jonah 4:2). Sadly many people today share Jonah’s lament and don’t want God to be merciful, abounding in love and ready to relent from punishing. They prefer the God of retribution not the God who is revealed by Jonah or by Jesus.

I believe in a merciful and loving God. I’m not blind to the suffering of the world. I’m experiencing it myself. As a believer, I have to wrestle with the real world, and faith in the God of love. I accept a modern scientific world that some events can be explained by natural causes. I don’t always know where God’s hand is in these events. I know God created this world. God continues to love His creation, despite the many problems created by natural causes. God could have created a different world, but He apparently finds this world a good world in which to love us. Mortality is part of this world, God loves us anyway. Our Christian faith is that God enters into the human condition and dies in order to save us. God does not avoid death. God does not ask us to suffer something He Himself is not willing to suffer. 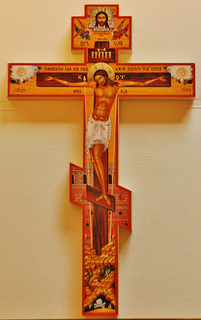 This week I began my second round of chemotherapy. Yesterday I received two different chemos aimed at destroying the lung cancer cells. I’ve experienced many of the serious side effects of the chemo. I reported that in a previous blog: Walking Through the Valley of the Shadow of Death. My first week after treatment was a whole lot rougher that what I’m currently experiencing, though I recognize that symptoms come and go throughout the chemo process. And while things are better this week compared to the first round, better is neither good nor normal.   Psalm 107 comes to mind again.

Some were sick through their sinful ways, and because of their iniquities suffered affliction; they loathed any kind of food, and they drew near to the gates of death. Then they cried to the LORD in their trouble, and he delivered them from their distress; he sent forth his word, and healed them, and delivered them from destruction. Let them thank the LORD for his steadfast love, for his wonderful works to the sons of men! And let them offer sacrifices of thanksgiving, and tell of his deeds in songs of joy! (Psalm 107:17-22)

This week, though I experience that loathing of any food, I am thankful to the Lord for His steadfast love and His wonderful works. Christ is present even in the suffering of the world.

Jesus answered: “It was not that this man sinned, or his parents, but that the works of God might be made manifest in him.”  (John 9:3).

The story of Job is lived many times in the history of the world. 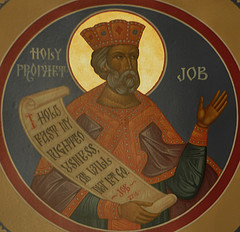 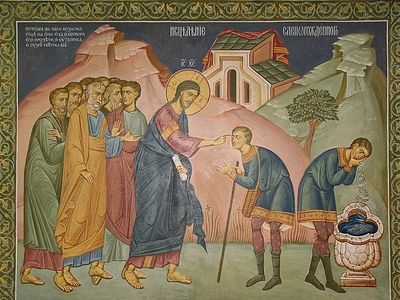 The Man Born Blind John 9:1-35 Metropolitan Anthony of Sourozh Like the man born blind we live most of our lives on alms, we sit like beggars at the roadside holding out a hand in the hope that someone will notice, if not us at least our hand, and give us something to sustain us for the next few hours at any rate. 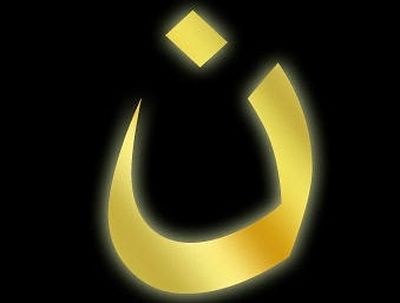 Nūn, Jonah and The Sign of The Fish Indeed for those with open eyes, the “signs of the times” are more than simply a figure of speech or a waiting for the “rapture”. And so I would like to offer up to you the sign of N&#363;n, the letter used by the Islamic State militants to brand Christian homes. 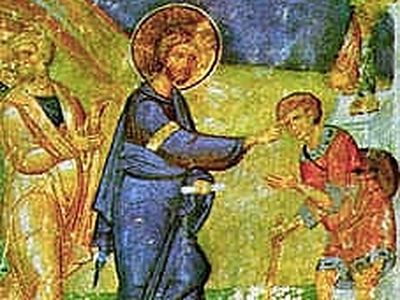