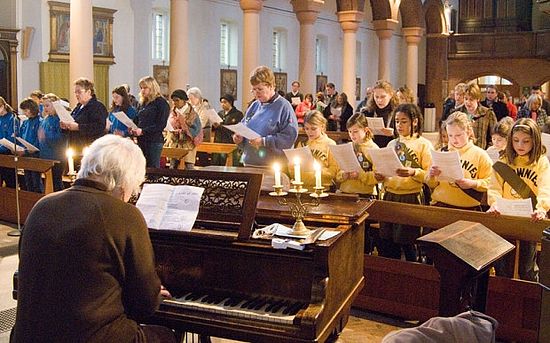 Sunday morning is an inconvenient time for church services because people are busy shopping and doing DIY, the Church of England has admitted.

Worshippers are increasingly turning their backs on the centuries-old practice of attending worship on Sundays because of other leisure and social “commitments”, it said.

The admission came alongside new figures showing that attendances at midweek services in cathedrals have doubled in a decade while numbers in the pews in parishes on Sundays continue to fall.

The Dean of Lichfield, the Very Reverend Adrian Dorber, said many people still crave quiet reflection, but are seeking out less “pressurised” times in the week to worship than Sunday mornings.

He said weekends are now “very committed” for most families in an era when life is “run at the double”.

The rise in cathedral congregations suggests many people are drawn by the formality and relative anonymity of a larger place of worship.

The figures show that the number of adults attending cathedral services rose by a third in the last decade to 30,900 last year.

Attendances at midweek services rose even faster with the number of adults doubling to 15,000.

Yet attendance at Sunday services in parishes has halved since the 1960s to below 800,000.

Speaking on behalf of the Church of England, Mr Dorber said the fact that midweek cathedral services were likely to be “reasonably short” was also part of the attraction.

He said: “People often squeeze them in to very, very pressurised lifestyles, whereas at the weekend you have got commitments with children doing sport, shopping, household maintenance.

“Life is run at the double these days and weekends are very pressurised and very committed.

“Taking out half an hour or an hour during the week is much more negotiable, it comes out of much more discretionary time.”

The Dean of York, the Very Rev Vivienne Faull, said cathedrals offered people the chance to join services on their own terms.

“We do have the opportunity of allowing people to come in from the edges.

“If I take a eucharist at 12.30 in the middle of the week in the nave at York Minster there will be a lot of people who just slide in the sides.

“It is very difficult just to slide in to a parish church because everyone in the village is watching.”

The growth in formal midweek services in cathedrals has been matched by a shift away from traditional Sunday services in more informal congregations, including some which meet in pubs, school halls or members’ homes.

Within the Church of England, the “Fresh Expressions” movement – a joint enterprise with the Methodist Church - has started almost 2,000 alternative congregations in less than a decade.

Christmas: no room at the inn for baby Jesus in school nativities As annual school nativity play season gets under way, survey shows baby Jesus being edged out to make room for Elvis, spacemen, footballers and Lord Sugar
Комментарии
kevin 19 мая 2015, 05:00
Let's see, hm a day of shall we say rest and reflection and a day when all of the faithful gather. Is taking one day to make it holy to much for these people how sad for thier souls.