As annual school nativity play season gets under way, survey shows baby Jesus being edged out to make room for Elvis, spacemen, footballers and Lord Sugar. 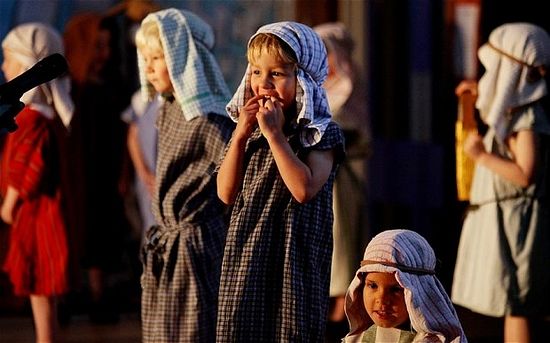 Shepherds are being replaced by spacemen as even Lord Sugar takes his place in school nativities Photo: JANE MINGAY

Christianity is being banished from school nativity plays as the annual performance of the Christmas story is replaced with bland “winter celebrations”, research among parents suggests.

Even in schools which retain religious themes, most now opt for a modernised version of the nativity story, often featuring elaborate twists and children dressed as unlikely additions such as punk fairies, aliens, Elvis, lobsters, spacemen and even recycling bins.

Examples cited in the survey conducted by Netmums, the parenting website, even included a retelling of the story modelled on The Apprentice. Others told of children dressed as ingredients in a Christmas lunch including carrots, sprouts and – confusingly – pumpkins.

Only a third of schools now stage a full traditional nativity complete with Mary and Joseph, inn-keepers, shepherds and magi, according to the survey.

Meanwhile one in eight had said their children’s school had dropped the Christmas story altogether for a modern alternative without religious references.

One in 14 said the school now opts for a fully secular event with neutral titles such as “Winter Celebration” or “Seasonal Play”.

A handful of those polled also said they had seen pan-religious school Christmas plays incorporating references to the Muslim festival Eid, the Jewish Hanukkah or Hindu Diwali.

The survey of more than 2,000 parents also showed that a significant minority now openly admit feeling aggrieved that their child had not been cast as a major character such as Mary or Joseph and many spoke of other parents attempting to pressurise teachers to give their child a bigger part.

It also showed that the image of children wrapped in household sheets and towels in a loose approximation of dress in 1st Century AD Judea as becoming a thing of the past thanks to supermarkets and online retailers offering cheap, mass-produced nativity costumes.

Overall just over nine out of 10 respondents said their children’s school stage some form of Christmas performance with contemporary versions of the nativity, mixing modern and Biblical characters, the most common Christmas celebration, performed at almost half of cases.

Only just over a third said their children still sing traditional carols and hymns as part of the performance while a quarter said they are feature festive pop hits.

Siobhan Freegard co-founder of Netmums, said: “Do they know it’s Christmas? At some schools, it seems not.

“While the UK is a diverse and multicultural society and it’s right children learn about all religions and cultures, many parents feel the traditional nativity is being pushed aside.

“It seems wrong to bombard kids with commercial messages about presents and Santa without them realising the true meaning of the celebration.

“This study shows many parents who aren’t religious look to the nativity as a comforting part of the Christmas celebrations and want their school to embrace and celebrate it, rather than make up a

“Christmas is about peace, acceptance and tolerance, so let's see more schools accept back this tradition.”

The study also highlights fresh concern that fears about safety and privacy are invading Christmas celebrations.

Only a minority (38 per cent) said the school allows parents to take pictures of the play freely, with one in six banning cameras altogether and one in seven restricting images to an official video which they have to pay for.

Significantly, one in three said the schools now ask parents to sign forms stating they will not share the pictures on social media.

Half of parents said they had provide a costume but most now buy with supermarkets the most popular option, while sites such as eBay and Amazon were also common sources.

Meanwhile almost one in 10 parents said their child’s schools now also stage a celebration for Diwali, while one in 20 cited Eid and Thanksgiving and three per cent of had Hanukkah performances.

Just one per cent said those celebrations were actively combined with Christmas nativity plays. 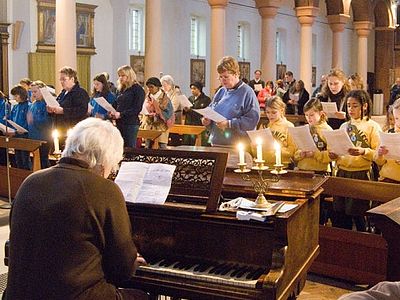 Sunday morning inconvenient for church services ... says Church of England Sunday mornings not ideal for some families to attend church because they are busy shopping and doing DIY, says leading cleric as figures show many switching to midweek services.
Комментарии