In Spain, cross erected in memory of the “White” Russian Volunteer Army 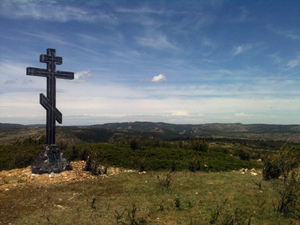 On June 9, 2012, on the peak of the Serro del Contradero mountain a cross was consecrated in memory of the “white” Russian Orthodox volunteer army who fought in the Spanish Civil War, the website of the Diocese of Korsun reports.

The rite of consecration of the cross was served by the rector of the Exaltation of the Cross parish in Madrid, Archpriest Andrei Kordochkin, along with the rector of the St. George Parish in Valencia, Archpriest Sergius Prosandeyev, and rector of the St. George Parish in Madrid, Igumen Piros (Gotsiridze) (of the Georgian Orthodox Church). The Cross was prepared by Jesus Mansilla Alba, mayor of the village of Checa, which is in the administrative region where the mountain is located. Also present at the ceremony were Sixto Enrique de Borbón, head of the “Society of Traditionalists”, as well as villagers and pilgrims from Madrid and Valencia.

“The White Russian volunteers are a page in the history not only of Spain, but also of the Russian Orthodox Church,” said Fr. Andrei. “As opposed to the Soviet 'volunteers', they were all Orthodox Christians; priests came to them three times, and Divine Liturgy was served. Today’s events are our prayerful duty to the Russian fighters who lived in Spain and died as Orthodox Christians.”

After the consecration of the cross, there was a service for the dead Russian volunteer fighters. Following the service was a brotherly meal for the guests and villagers.