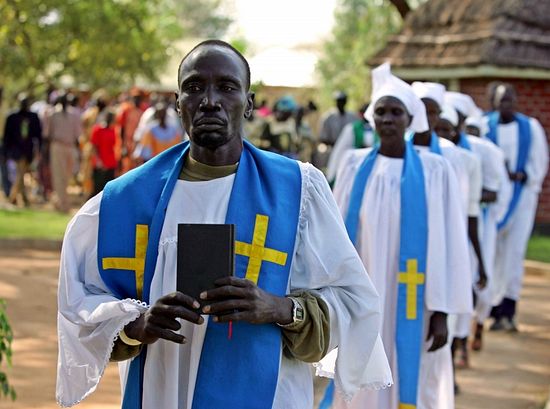 Catholic priests and nuns arrive for a religious ceremony for late John Garang in New Site village in Southern Sudan August 2, 2005. [Southern Sudanese grieved their former leader John Garang around a simple bed on Tuesday and hoped the peace deal he struck would stick under his successor despite rioting over his death that killed 24 people.]

Two Sudanese pastors who are potentially facing the death penalty after being arrested and imprisoned on trumped-up charges of alleged conspiracy and espionage, were removed from a low-security military prison and transferred to a more dangerous facility where they've been denied access to visitors, the pastors lawyers have said.

Revs. Peter Yen Reith and Yat Michael, who've been detained since the winter and charged with violating seven laws including spying, undermining the government and insulting religion, were transferred from the Omdurman Prison for Men outside of Khartoum — where they were allowed to see their families and lawyers — to Kober Prison in North Khartoum, a high-security detention center.

According to an advocacy group closely following the case, Christian Solidarity Worldwide, no one — not even their wives or lawyers — has been allowed to visit with the pastors since their transfer to Kober.

Michael and Reith, who are clergymen from the South Sudan Evangelical Presbyterian Church, had been held in Omdurman Prison since March 1 and were last seen there on June 3, the day in which they were visited by three other Sudanese pastors and American pastor the Rev. William Devlin, who was detained for over an hour and prevented from visiting with the pastors after guards caught him taking photos and video inside the prison waiting room.

Concerns were raised about the whereabouts of the pastors after family members were denied access to them on June 4, but prison officials confirmed on June 6 that the pastors were transferred.

"We are concerned by this development in the clergymen's case. They already endured extended detention without access to their families at the beginning of this year, and they and their families should be spared further emotional distress," Christian Solidarity Worldwide's Chief Executive, Mervyn Thomas, said in a statement shared with The Christian Post.

"We urge the Sudanese authorities to ensure that the clergymen's detention is regularised, and they are permitted regular family visits and unhindered access to their lawyers. The decision to detain them at a higher security prison should be reconsidered, given that they have not been found guilty of any crime."

CSW believes that the Sudan National Intelligence and Security Service may have issued an order to prison officials telling them not to allow Reith and Michael to have any visitors.

The pastors' lawyers met with Sudan's director of prisons on June 7 and requested access to the pastors. However, they were directed to talk with the director of Kober Prison, who told the lawyers they needed a court order.

The lawyers request for a court order was denied because the court ruled that the decision should be left to the prison director.

CSW also reports that although there was no official reason given for the pastors' not being allowed to have visitors, there is speculation that the move "may have been triggered by the actions of foreign visitors," an implication that it may have been the result of Devlin's visit.

Devlin, who pastors the Infinity Bible Church in the Bronx, has visited Sudan eight times in the last nine years and always stays as a guest of Sudan's Foreign Minister Ali Karti, he told CP last week. Upon his latest visit, he was invited by the three Sudanese pastors to go with them to visit Michael and Reith in prison.

Although the last time the pastors were seen in Omdurman Prison was the day in which Devlin was detained there, Devlin told CP on Tuesday that he was told that the transfer was already being planned prior to his visit.

"A Muslim colleague in Khartoum reported to me yesterday, that the move of the two imprisoned pastors was in the works prior to my 90-minute detention on June 3," Devlin wrote in a statement. "My detention was unintended by me. However, I pray that God would use my detention to make known the plight of these two innocent pastors."

Devlin had previously urged American and Western pastors to travel to Sudan to visit with the pastors and prove to Sudanese government officials that religious freedom violations impact how the country is viewed by potential international trade partners. Even though the pastors have been moved to a high-security prison where they are not allowed visitors, Devlin still encourages International pastors to travel to Khartoum to make a statement and support the pastors families.

"Western pastors, African pastors, European pastors must go to Khartoum to advocate for these imprisoned pastors," Devlin wrote. "Even if they cannot visit them, they can meet with their wives and support their wives and children financially."

The next scheduled hearing for the pastors will take place on June 15. 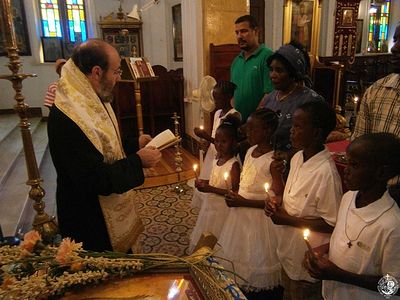 Children of South Sudan Baptized into Orthodoxy: a silent statement

Children of South Sudan Baptized into Orthodoxy: a silent statement South Sudan is the newest independent state in the world, formed in July 2011. The majority of its citizens are Christian, while the Orthodox population is estimated to be a few thousand. 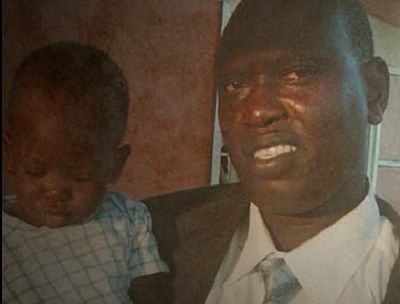 Sudanese Pastors Accused of ‘Offending Islam’ Boldly Face Persecution, Possible Executions The two pastors, accused of spying and offending Islamic beliefs, have been imprisoned for two months with no contact with their families in the capital city of Khartoum, where numerous Christian churches have recently been desecrated.
Комментарии